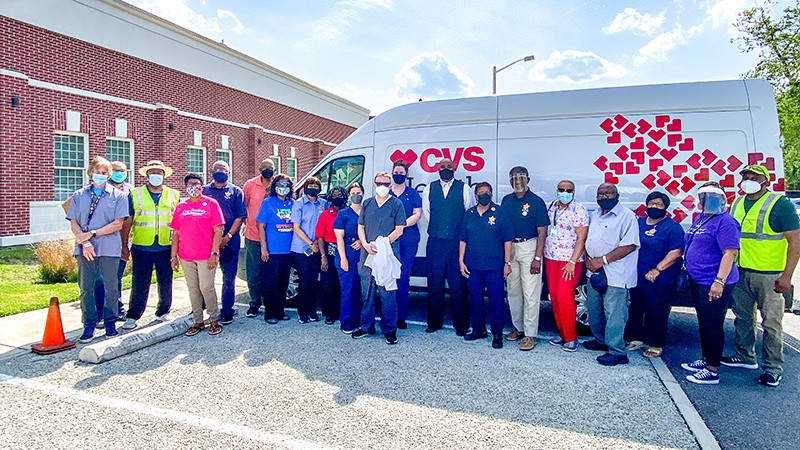 As COVID-19 vaccines are now available to more people, Suffolk churches are doing what they can to ensure those more likely to be looked over receive the vaccine.

On May 4, First Baptist Church Mahan Street partnered with CVS to give vaccines to the community. Unlike other vaccine clinics, this one did not require reservations or appointments. Those who needed a vaccine, but did not have the means or the familiarity to make an appointment online, could come and get vaccinated.

The church was one of four in Suffolk to partner with CVS to give out the Pfizer vaccine. This collaboration is to advocate for the vaccine and target the more vulnerable population. The partnership includes First Baptist Church Mahan, Oak Grove Baptist Church, East End Baptist Church and Mt. Sinai Baptist Church.

“The obvious research and statistics show that even though with the good news of more vaccines going out, we still have a long way,” said Pastor Steven Blunt of First Baptist Mahan Street. “The only way to get there is to get as many people vaccinated as possible. Especially in the vulnerable demographics.”

The church focused on COVID-19 education. Many people had questions and concerns about the vaccine, and the church wanted to make sure everyone had the information they needed to feel comfortable.

“We all have been vaccinated, so we are not asking anyone to do something we haven’t done,” said Blunt. “If there is any hope of returning to normal, people are trusting in institutions and individuals with integrity, and church has to play a significant role in that.”

The church was slated for 90 vaccines with a goal that every dose would go into an arm and not the trash. When the CVS pharmacists gave a two-hour warning before a batch of vaccines would go bad, the volunteers would get on the phone and call around.

The volunteers realized people were unvaccinated not due to lack of availability, but rather a lack of access. The volunteers made sure to reach as many people as possible to let them know that there was a simple opportunity to get the vaccine.

“To have to schedule on the computer is impersonal to people,” said Patricia Richards-Spruill, coordinator for the event. “We’ve spent time on the phone and going door to door to make it personal.”

Not only was this process more personal, but the CVS pharmacists went the second mile, according to Richards-Spruill. Even though the clinic was inside, there were two cases where they gave vaccines in people’s cars due to them having difficulty getting out and coming to the door. Another elderly citizen had trouble getting from the front door to the tables and had to sit and rest. One of the pharmacists came to where the person was resting and administered the vaccine there.

This was the first vaccination event at First Baptist Church Mahan, but the consensus was that it would not be the last. Those who received their vaccine are scheduled to get their second dose on May 25.