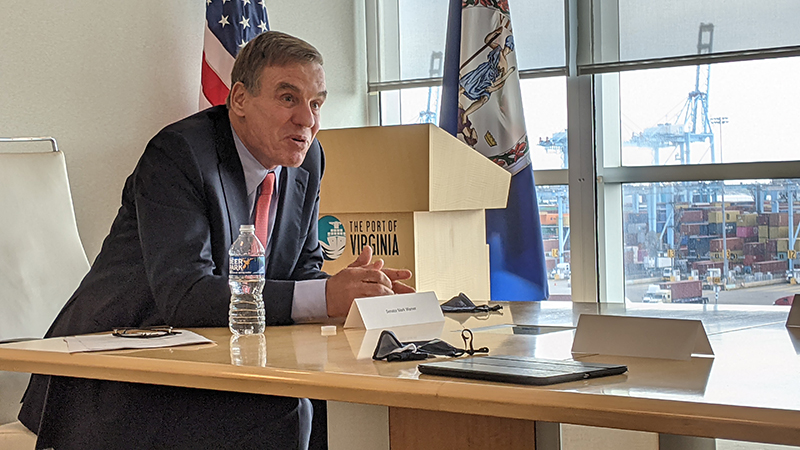 Sen. Mark Warner met with Hampton Roads transportation leaders May 7 at the Virginia International Gateway as they outlined their federal funding priorities for the region.

Hampton Roads transportation leaders outlined their priorities for Sen. Mark Warner Friday on how the region could benefit from federal money to move along projects such as port dredging, interstate and road expansion and other infrastructure projects.

Warner’s meeting at the Virginia International Gateway terminal at the Port of Virginia was part of a two-day swing through the region, meeting with museum and music venue operators the day before and later Friday visiting the Hampton VA Medical Center with Reps. Bobby Scott and Elaine Luria.

He said the port is among the state’s greatest assets and believes the region can use its deep maritime ties to its advantage.

New port director Stephen Edwards emphasized that the dredging at the port is contingent on federal money coming to it. He also asked Warner to help it get “new start” designation from the Army Corps of Engineers. That would let the Norfolk Harbor and Channels widening and deepening project move to the next stage of construction and get Army Corps funding. Currently, that project is ongoing and is funded through a combination of state and local money.

Edwards said it is important that it work collaboratively on making improvements to State Route 164 to Suffolk. Bob Crum, executive director of the Hampton Roads Transportation Planning Organization, said that kind of work helps the port.

“What we’re about is what comes next, and for our port partners, we need to build that land-side transportation network to support the tremendous work that you’re doing at the port,” Crum said.

He said a priority is to finish Interstate 64 expansion north to I-295 in Richmond.

Crum noted the current widening of I-64 in South Hampton Roads, with the goal of continuing that though I-664 to Route 164, “which is going to be key to our port facilities.”

“So there’s a lot of projects there that we really think that if we’re going to keep pace and really be able to provide the type of land-side network,” Crum said, “that some investments are going to be critically important.”

The projects, Crum noted, are out of the organization’s long-range transportation plan endorsed by its regional board.

Kevin Page, executive director of the Hampton Roads Transportation Accountability Commission, said the region would soon have its own 44-mile managed hot-lane network.

Crum also noted ongoing conversations with city managers throughout the region on the fiber ring and using money from the American Rescue Plan to build that out, having already received such a commitment from Norfolk Mayor Kenny Alexander.

David White, executive director of the Virginia Maritime Association, agreed with Warner about the importance for the region to embrace a maritime focus.

“This region is a maritime economy,” White said, “and I think that we have really finally come to recognize that, and we need to flex our muscles around that.”

Page said there are 200 lane miles under construction or reconstruction in Hampton Roads, and noted that it is the 95% funding partner in the Hampton Roads Bridge-Tunnel expansion project. The HRBT project, he said, would create 28,000 jobs between now and 2025.

He stressed the importance of building up the infrastructure surrounding the port and working with federal partners to gain more financial support for those efforts.

But he said the region’s cooperation has never been better, and its regional transportation priorities even have buy-in from unlikely places.

“It’s been really enlightening to me to sit down with Southampton County, who’ll probably never see an HRTAC project because we have highest priority congestion relief projects,” Page said, “but they’re a contributor and understanding as that regional partner what it means for them — a lot of trucks stopping there in that region to fuel up.”

Said John Milliken of the port authority’s board of directors: “What happens outside the port boundaries is every bit as important as what happens inside.”

Warner noted the collaboration on display throughout the region hasn’t always been the case.

Warner also addressed U.S. Route 58 and its role with the port and the overall transportation network.

“We’ve been trying to make sure that there is that southern route that goes along 58,” Warner said. “It’s really important (and) that’s been a priority for 20-plus years. And part of it is improvements in communities like Suffolk, but part of it is the need for improvements in a place like Patrick County, much further west, because even if you get the improvements in Suffolk, if you’re trying to ship goods to Tennessee and beyond, and the 58 corridor can be one of those corridors, you’ve got bottlenecks along the way.

“It’s gotten better. Some of these bottlenecks go back to when I was governor (from 2002 to 2006) and they’re finally improving, but it’s been a long, long process. And I do think there is an opportunity there.”