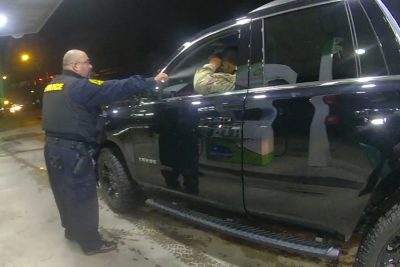 Ex-Windsor Police Officer Joe Gutierrez is alleged to have erased all text messages and emails from his town-issued cell phone prior to returning it to Windsor officials.

Gutierrez was fired April 11 after video footage showing him holding a Black and Latinx Army officer at gunpoint during a traffic stop last December and pepper-spraying him went viral online.

The Smithfield Times had requested under the Freedom of Information Act on April 15 to be provided with copies of all correspondence, to include emails and text messages, sent by Gutierrez from July in 2020 to date. The town acknowledged the request April 22 and requested additional time to respond, then asked for an additional 10-day extension April 28 given the number of FOIA requests from other media outlets concerning the traffic stop and the volume of communiques. Windsor Town Manager William Saunders emailed those records to the paper May 12, adding “FYI – Officer Gutierrez blanked out his phone before returning it, so those texts were lost.”

“It is absolutely not standard practice for employees to wipe their phones, as it potentially incurs the destruction of documents sooner than the Library of Virginia retention standards dictate,” Saunders said.

The Army officer, 2nd Lt. Caron Nazario, has filed a $1 million federal lawsuit against Gutierrez, naming Officer Daniel Crocker as a co-defendant. Crocker, who remains employed by the Windsor Police Department, is the one who initiated the traffic stop.

Per state law, public records must be retained for a defined period of time based on what particular function of government they document. A set of records that document a particular governmental function is what Library of Virginia officials refer to as a record series. Text messages and emails don’t fall into a particular record series since they’re simply delivery methods that can be used to transmit any number of records, including video, audio, still photos and text.

“Think of the text message or email as the envelope, rather than its content,” said Chad Owen, records management coordinator for the Library of Virginia.

Absent contents that would call for a specific retention series, such as an officer’s travel receipt or drug screening result, most text messages and emails fall under the “correspondence” records series, as defined on pages three and four of the GS-19 retention schedule for local governments, Owen said. Correspondence has multiple retention periods depending on the role of the person sending or receiving it and the content of the correspondence.

“Even the Governor isn’t required to retain every spammy email he receives,” Owen said.

A significant portion of emails and the vast majority of text messages from local government employees would fall under the GS-19 series 010039, which has a retention period of zero years after being deemed no longer administratively necessary, Owen said. This occurs once a public official decides the record is no longer needed.

“As such, there is considerable leeway for public officials to delete or destroy text messages and emails under their control,” he said.

But there’s one important exception. Under the Virginia Public Records Act, records should not be destroyed if there is pending legal action, an audit, investigation or FOIA request.

Nazario filed his lawsuit against the two officers April 2, each of whom was issued summons April 6. On April 11, the same day Gutierrez was informed of his termination, Gov. Ralph Northam directed the Virginia State Police to conduct an independent investigation of the traffic stop.

“If there was pending action then said deletion would have been done contrary to the VPRA,” Owen said. “I think that would ultimately be a matter of mens rea to be argued before a court.”

Mens rea is a legal term referring to the intention or knowledge of wrongdoing.