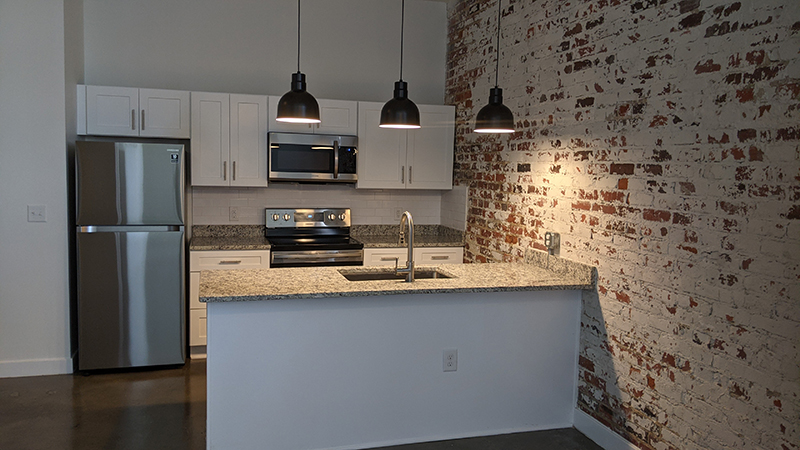 Fifty-eight apartments in the first phase of the Peanut Crossing development along Saratoga and Wellons streets are set to take occupancy as soon as May 15.

The Peanut Crossing development off of Saratoga and Wellons streets next to the Norfolk Southern Railroad mainline, while having nearly all of its familiar elements, has been transformed in its first phase into 58 apartments that are expected to be occupied as soon as May 15.

The mostly studio and one-bedroom apartments on the 10-acre triangular property are about 85% pre-leased, said Echelon Resources Inc. President Edwin Gaskin during a recent tour of the site. The company is a historic tax credit, property redevelopment firm.

Last-minute touches were being put on the apartments even as prospective tenants were getting tours of the property and about 40 Suffolk Fire and Rescue members were getting a walkthrough of the site.

Each apartment has unique features that come with it being on the site of the former Suffolk Peanut Company.

They all have high ceilings, exposed fixtures and other elements that have been modified and given new uses, as well as modern appliances, washers and dryers and high-speed internet in each, ranging in size from about 700 square feet for a one-bedroom apartment to 950 square feet for a two-bedroom place.

As part of the opening, the site will also have a fitness center, a dog park and a pair of courtyards, though those have yet to be landscaped. One of them still has foundation walls in it that were left in and will be used as part of a gathering and grilling spot, and the other is being turned into a wildflower garden. The fitness center uses some of the old trolleys to hold weights on them.

The overall site has been landscaped and given a facelift thanks in part to a façade grant from the city’s Economic Development Authority, with fencing surrounding the site and new signage greeting visitors to the site from its two entrances.

“The landscaping really has made the site very inviting when you drive in,” said Deanna Holt, economic development manager, during a May 12 Economic Development Authority meeting. “The team of contractors restored all the broken historic windows. They replaced the metal canopy along the walkways around the building. They removed the truck scale, and they paved the driveway for the tenants.”

The original façade grant was for $280,000, but because two of the buildings that were in the initial approved scope were removed, the amount to be issued is going to be $240,000. The reason for the buildings being taken out, according to EDA member George Consolvo, is that another part of the property has been sold to another developer who will be putting in rental apartments.

Of the 58 apartments, 40 are in the five-story building, which has a newly installed elevator, and 18 are in the single-story building connected to it. It also has covered and outdoor parking and an enclosed mailbox area.

In 2019, City Council approved a conditional use permit to build up to 225 apartments on the site of the former Suffolk Peanut Company.

And whether directly or indirectly, there is development already taking place nearby, with four new homes on Wellons Street and a restaurant being proposed across the street from the property.

Gaskin previously noted myriad possibilities for the site to be host to a business park with a mix of commercial uses and last December hosted several city and state officials in a building that fronts the Saratoga Street entrance, one being envisioned as a Peanut Crossing Market, though its ultimate use has yet to be determined.

The site still has to pass a few key inspections, as Gaskin put it, before residents take occupancy, which, if all goes well, will start May 15 and continue through July.

“We’re at the tail end, and … we’re working with the building code official,” Gaskin said. “They know our schedule, and they’ve been working with us, to their credit, trying to get there, while checking all the appropriate boxes.”