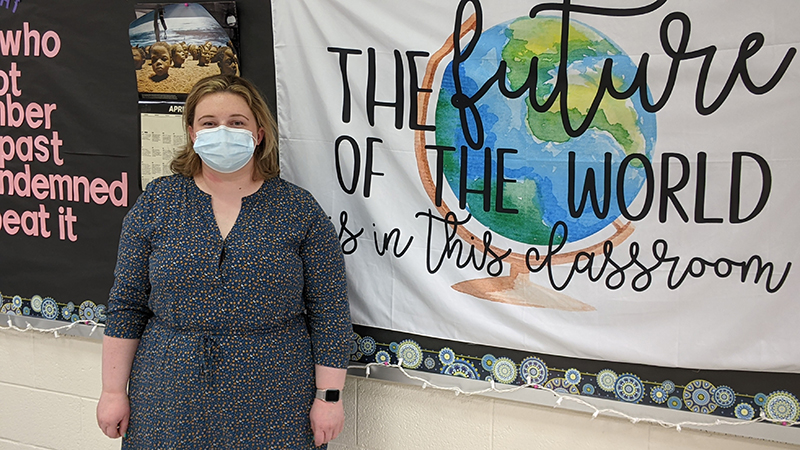 Sarah Albright, a world history teacher at Lakeland High School, was chosen as the Suffolk Public Schools Rookie Teacher of the Year.

Sarah Albright certainly did not count on having to begin her first year of teaching during the coronavirus pandemic, but by all measures, the Lakeland High School world history teacher has adapted well to teaching remotely and doing her best to bond with students she had never met.

She was honored by the award, but said it easily could have gone to any first-year teacher.

Her student-teaching experience was a normal one, and after she graduated in December 2019 with a master’s degree in secondary education from Old Dominion University – after earning a bachelor’s degree in justice studies from James Madison University – she began substitute teaching while looking for a full-time position.

Albright, 27, was a substitute teacher – mostly at Deep Creek Middle School in Chesapeake – and was subbing March 13, 2020 when Gov. Ralph Northam announced that schools would close due to the pandemic.

“I remember subbing that last day when the whole world stopped,” Albright said, “and then everything kept racing, like, ‘Oh my gosh, am I going to get a job? I went through 17 job interviews, like maybe people aren’t going to quit. Maybe people don’t need teachers.”

She thought she might have to continue working at a pizza restaurant for another year.

Instead, she got hired to teach in Suffolk at Lakeland, and the school’s social studies department chairwoman, India Meisel, praised Albright as someone who doesn’t think or act like a first-year teacher.

“She is not afraid to try new things,” Meisel said. “She makes every attempt to connect with her students and make her class feel like an inviting space for the kids.”

Lakeland principal Doug Wagoner noted Albright’s resiliency as she worked to create fun and engaging lessons, saying she “has taught with grace, dedication and love” for a group of teens she had not met until last month.

Albright said she uses the fact that she’s a younger teacher as an asset in reaching her students.

“I try to show them that I’m human, and I try to talk about myself and see if they can connect with me,” Albright said.

She said it has been a tremendous help to connect with her Lakeland colleagues, who vary in age and experience. Friends of Albright’s from ODU have told her that, unlike her, they hadn’t met their co-workers until last month.

“I was fortunate that even though we were coming in twice a week, that I was still able to meet my co-workers and collaborate with them.”

It also helped that she received her Google Classroom certification, and that she is comfortable using the technology that has been crucial during remote and hybrid learning, though there were limits, such as not being able to use virtual reality programs.

But being able to use Google Earth to show historical sites such as the Great Wall of China has been worthwhile, and her comfort with, and knowledge of technology helped other colleagues. And at the same time, she benefited from their experience in designing engaging lessons.

“I guess since I’ve grown up with it,” Albright said, “I know how to use it more for daily life and teach them the good things of it and find their research the right way.”

She recognizes, though, that even students living in a digital age can get overwhelmed with it.

She teaches World History I – from the beginning of time to about 1500 – “the one nobody likes,” she jokes. But as a student, Albright recalled that she didn’t like it either. Fortunately for her students, that’s changed.

Still, she always wanted to teach, inspired by her mother and sister, who has cerebral palsy. Albright said both nearly died when her sister was born. And she’s always had an interest in history. She visited a pair of concentration camps in Germany – Auschwitz and Birkenau – during a study abroad program.

“I’ve always liked history,” Albright said. “You get the facts, but there’s always a story to it.”

Her first year of teaching, and doing so during a pandemic, has been full of growth.

“I feel more confident after my first year,” Albright said. “And I know next year I’ll definitely feel better. I feel kind of lucky that I could be in here for the first part because I was able to start working on the teaching part, and then next year, I can work on the classroom management and behavior issues.

“I just feel completely different than when I first started out because I was super nervous about everything, but now I can feel more at ease about going into it.”