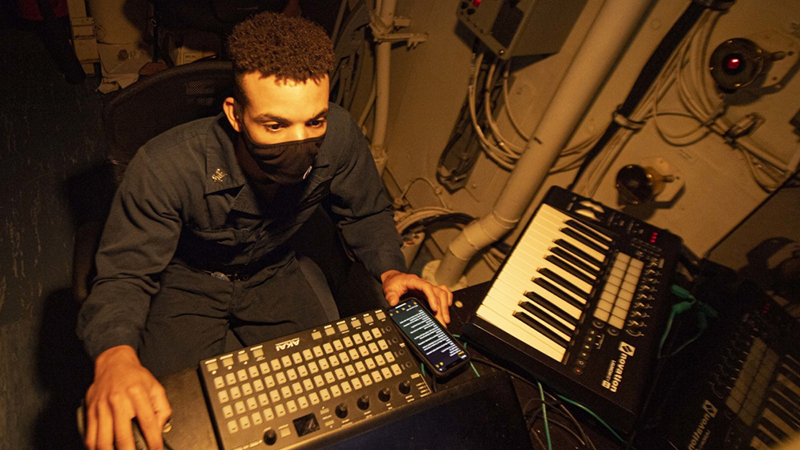 Like most sailors, Sonar Technician (Surface) 2nd Class Kailyn Phillips brought personal items on board the guided-missile cruiser USS Sterett to enjoy during the limited free time on deployment.

While many might bring laptops, video games and books, Phillips packed a guitar and has written more than 45 songs during the destroyer’s more than 10-month deployment. When the ship returns to homeport in San Diego, Phillips says that one of the first things he plans on doing is going to a studio to record them.

The crew of Sterett has been on board since entering sequester, April 7, 2020. Besides pier visits to Guam and Bahrain, the sailors have not stepped off of the ship for more than 10 months. Throughout a challenging deployment and separated from friends and family, Phillips, like other sailors on board, has developed an outlet to build resilience and in turn do his part to ensure Sterett stays mission-ready.

“Music is just like any other form of art. It’s like communicating in a way where I don’t have to be directly speaking to someone,” said Phillips. “Instead of needing someone to talk to, I can just write it down.”

Phillips dabbled musically when growing up, playing piano and was in band in junior high school, but it didn’t become a major focus for him until much later. However, he has been performing in other avenues since childhood.

Agents working for a television series filmed near Phillips’ childhood home in Norfolk suggested acting classes to his parents after they saw their son engaged, energetic and animated near the set of the show. This recommendation led Phillips down a path that is uncommon for most people. His parents enrolled him in a modeling and acting school at the age of 10, and he would soon find himself participating in runway shows, modeling for clothing catalogues and acting in commercials. Despite the significant amount of time these activities took up, Phillips balanced it with regular middle and high school classes.

“I didn’t have a lot of lollygagging time while I was growing up. I was always doing something,” said Phillips. “My dad supported anything I wanted to do while growing up. It didn’t matter what it was. Even if I only had an idea, he would run with it.”

After graduating from King’s Fork High School in 2014, Phillips went to college to study kinesiology. After a year, Phillips decided that he needed a job to support his higher education. He considered his options and decided that following the footsteps of his father, a retired interior communications electrician in the Navy, would be the best decision.

“I needed some sort of structure after high school,” explained Phillips. “The Navy was my way of transitioning from childhood to adulthood.”

Phillips went to boot camp in March 2015 and became a Sonar Technician (Surface). In this rate, he operates surface sonar and oceanographic systems, evaluates sonar and oceanographic data, operates underwater fire control systems and performs maintenance on surface sonar and allied equipment. In addition to completing STG-A School and Sonar Supervisor C-Schools in San Diego, Phillips served aboard the guided-missile cruiser USS Vella Gulf. He reported aboard Sterett in 2019.

Phillips’ passion for making music didn’t come until the beginning of 2020, when he met local musical artists in San Diego who inspired him. He collaborated with them and even was featured in a published song under the moniker “Kay Press Play.”

One year later, he has invested countless hours on songwriting, the bulk of it balancing with a demanding job underway on deployment. Phillips intends to finish his degree in kinesiology, but isn’t really sure what he would like to do afterward. He has considered being an actor, gym owner and of course, musician. Phillips said that he enjoys entertaining people and making people feel good, and he wants his future career to support this goal.

“I have no obligations or anything that is holding me back,” said Phillips. “School is definitely going to come first, but I’m going to be pursuing other things alongside it if possible. As long as I have any amount of time, I can do it.”