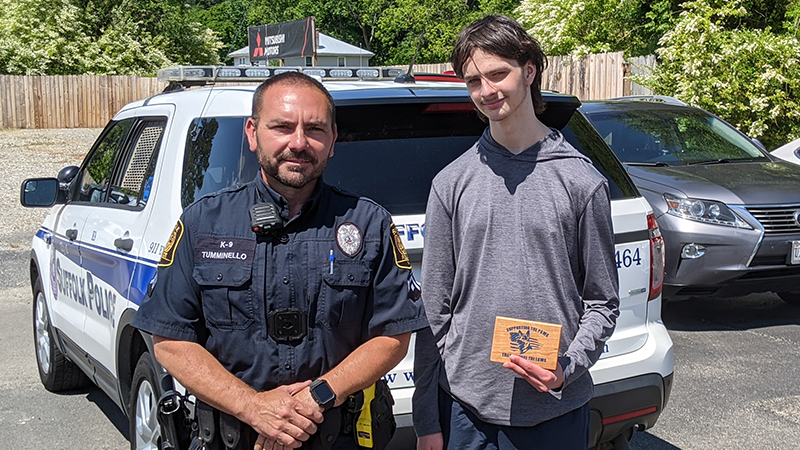 Suffolk Police Officer Rosario Tumminello and his K9 Rommel recently paid a surprise visit to King’s Fork Middle School eighth-grader Christian Phillips, who wrote a letter to Mayor Mike Duman asking whether the police department had a mentor program and said he has his heart set on being a K9 officer.

Christian Phillips wants to be a K9 police officer in Suffolk.

Having seen many TV shows about such officers, Christian, a 15-year-old eighth-grader at King’s Fork Middle School, got a surprise recently when he got to meet Suffolk Police Officer Rosario Tumminello and his K9, Rommel.

The surprise came after Phillips sent an email to Mayor Mike Duman asking whether the Suffolk Police Department had a mentor program.

After meeting Tumminello and Rommel, Phillips is even more convinced of his career choice.

“This is probably the happiest day in my life in a while because I’ve been dealing with a lot of depression lately, and this really helped,” Christian said.

Christian, 15, said his mom, Tracy Nelson, had told him he has almost always shown an interest in K9s and police officers, going back to when he was a year old. But until his visit with Tumminello and Rommel at Duman’s car dealership, Christian had never seen a K9 up close.

Tumminello spent more than an hour talking about his work, Rommel and the city police’s K9 unit, which has three officers, while Christian asked questions about the work.

Suffolk Police is in the process of restarting its Police Explorers program, which helps youth learn more about law enforcement and character development while providing one-on-one mentorship.

Tumminello, who has been with Suffolk Police for about eight years, said K9s, which have both patrol and narcotics certification, would continue to be used, even after Gov. Ralph Northam signed a marijuana legalization bill earlier this year. Prior to joining Suffolk Police, he trained explosive detection dogs for the Marine Corps.

And though new K9s will still be allowed to sniff for drugs, the current group will not, since they are not able to distinguish between marijuana and other drugs, which means they cannot be used on a typical traffic stop the way they have been. The current crop of K9s can still be used in the execution of search warrants but will be otherwise used on patrol duty only.

On patrol duty, police K9s are involved with tracking, article recovery, evidence recovery, or anything with odor on it.

New dogs coming into the K9 program will be trained to sniff for drugs other than marijuana.

Despite that, current K9s will still play a key role in the department in helping to sniff out suspects in crimes. The city has had its current K9 program since about 2007, but Tumminello noted the department had such a program previous to that also.

Tumminello has had Rommel, a 7-year-old German shepherd, since October 2015. Rommel is patrol and narcotics certified. He’s one of the department’s three K9s, and the department is in the process of getting a fourth K9, a German shepherd/Belgian Malinois mix, though he said one is likely to retire soon, keeping it with three K9s. The other dogs currently in use are Belgian Malinois. There is usually one K9 officer on each shift — morning, evening and overnight.

Duman said he was impressed with Christian’s email and initiative in reaching out. Tumminello also offered his appreciation to Christian.

“It’s nice to hear from you,” Tumminello said. “It’s nice to hear that there’s still people out there that want to do this job, because it’s a tough time to be in policing, but it’s a great profession and it’ll come back around as far as the public’s view of us. It’s a good place to work.”

Before he left, Tumminello got Christian’s email address to send him information about the Police Explorers program. Then he gave him a wood carving of a German shepherd fronting an American flag, with the words, “Supporting the paws that enforce the laws.”

“I really, really want to do this now,” Christian said. “It made me positive, extra positive. Before, it was, I want to do it, but I’m not sure I can. And now I want to do it. I’m going to do whatever it takes to do it.”