Giving back for a birthday 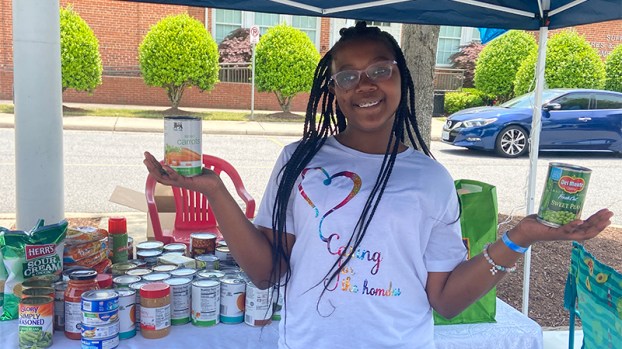 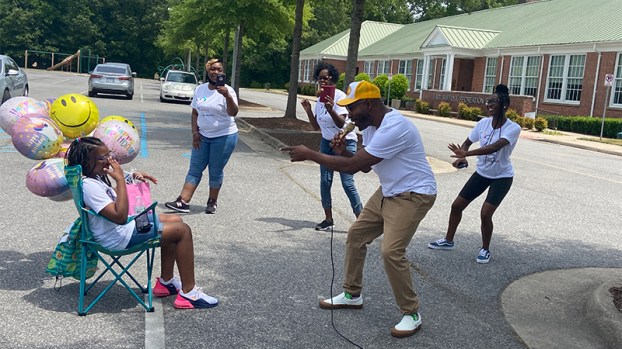 Aubrey Freeman received a birthday surprise from Romo Entertainment for her heart for helping others instead of receiving a party.

When most kids turn 9 years old, they plan a party with their friends to have fun receiving gifts. Aubrey Freeman had a different idea.

On May 22, in the East Suffolk Recreation Center parking lot, Aubrey and her family set up tents and tables to collect canned food. Aubrey plans to donate the food locally to the Suffolk Christian Fellowship Center.

“I don’t like how homeless people get mistreated,” said Aubrey. “It makes me sad, and I want to help people in need.”

Instead of having a party or receiving gifts, Aubrey asked her friends and family to donate a can of food for her drive. She hopes to grow this project every year and to keep getting more items to give back.

For anyone who stopped by to donate, Aubrey had a baggie of homemade cookies and a bottle of water to give them as a thank you on the hot Saturday afternoon. With its partnership with UPS, Suffolk Sheriff’s Office donated 150 books and bookmarks for any child that came by.

“I feel very happy,” said Aubrey. “I’m shocked that I’m getting a lot of support. It makes me happy to help the homeless.”

Even though it shocks Aubrey, her family and anyone else who talks to her can see her genuine heart and be more than willing to help her cause.

“She’s one of those at an early age that not just sees what is going on in her community, but her heart motivates her to want to do something with that,” said Paula Scott, Aubrey’s aunt. “She prefers doing this to a party with balloons and a DJ. To see that at such a young age makes me want to do the same. I love it, and I pray others will do the same. She is just so genuine.”

Aubrey does other giveaways as well to give back, even though COVID-19 has prevented her from doing as much as she would like. The day before, she had a drawing for those fighting cancer to commemorate Skin Cancer Awareness Month in May. The winner received a basket of fun summer items and a crown to remind them that they are beautiful no matter what.

Aubrey’s family was there to support her with their #TeamBre shirts. They helped organize cans, wave a sign on Sixth Street and anything else needed to help this young girl’s mission happen.

“I am very supportive of Aubrey and am so proud of her to be so young just to think about others,” said Kim Dolberry, Aubrey’s aunt. “This is what God wants us to be. Love is greater than hate, and that’s what the world needs right now.”

Even though she never asks for anything for her birthday, just donations for the homeless, Aubrey received a birthday surprise during her can collection. Her mother, Latoya Savage, hired Romo Entertainment in Hampton to come down and sing for her.

“She always puts everyone herself last, and even though she didn’t ask for it, I wanted to do something for her,” said Savage. “I am so proud to be her mom. She just wants to help others. If she could save the world, she would.”

Aubrey’s birthday isn’t the only cause of celebration. On her actual birthday, May 24, Aubrey had received over 1,500 cans of food, with more being left on her porch. Aubrey encourages others that even if they are young, they can make a difference too.

“Don’t give up hope if you don’t do a lot on your first try,” said Aubrey. “Always believe in yourself. You can help the world.”