A discussion addressing food insecurity and its root causes 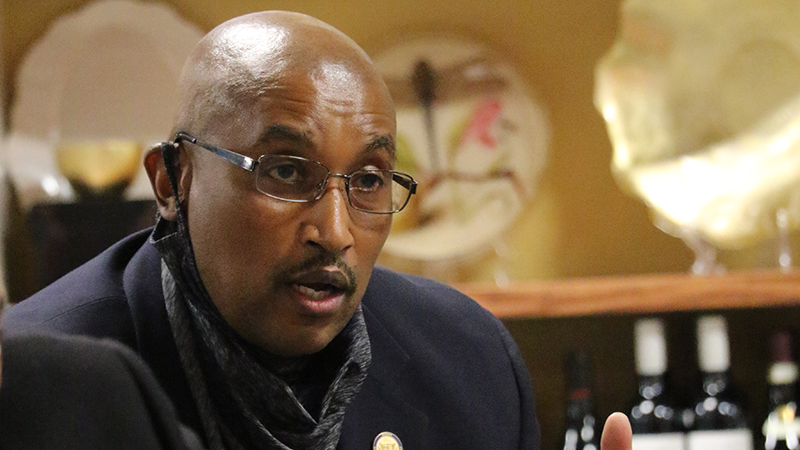 Del. Clinton Jenkins, who represents the 76th district, including part of the cities of Suffolk and Chesapeake, speaks during the Foodbank stakeholder roundtable discussion May 24 in Franklin.

Dr. Ruth Jones Nichols, president and chief executive officer of Foodbank of Southeastern Virginia and the Eastern Shore, set the tone and established the stakes of the discussion as it began.

“As all of you know, the Foodbank of Southeastern Virginia and the Eastern Shore has been working very diligently over the past few years in particular to make sure we better understand what’s happening in Western Tidewater and here in the City of Franklin, specifically,” she said. “We have an interest not just in Western Tidewater because it’s within our service area, but because we know that some of the highest rates of food insecurity throughout Southeastern Virginia and in the Eastern Shore are right here in Western Tidewater, including the City of Franklin.”

She said that in fact, in her organization’s entire service area, which covers almost 5,000 square miles, the City of Franklin has traditionally had the highest food insecurity rate.

“We’re hoping to have a conversation with you, not talk to you, but a conversation with you so that we can gain a better understanding from your perspective about what we can do together to not just make sure folks have access to healthy, nutritious food, but to make sure at some point we address the systemic issues that serve as root causes for food insecurity,” she said.

Feeding America is the umbrella organization for 200 member food banks across the country, and Babineaux-Fontenot noted during the discussion that she is on a journey to visit all 200 of them.

She said she doubled back to Western Tidewater on this journey because of what leaders and people in the community are doing.

She highlighted the importance of not deciding that the crisis is just about feeding people today.

“If instead you’ve decided as a community that when you have 8,500 people inside of your city, Mr. Mayor, as you’ve said, surely you can solve for hunger here,” she said. “Have you decided to solve for hunger here? I get the impression that maybe you have. I know it’s solvable.”

She indicated that it takes groups like those present at the discussion that decide that feeding is important as a first step — the ground floor that leads to other steps.

Franklin Ward 4 City Councilman Linwood Johnson spoke to some of the other steps when he talked about the need to offer other services in addition to food, like job training. He also spoke about working to bring jobs to the area.

He also referenced efforts to expand broadband, and Babineaux-Fontenot acknowledged this as important so people can avail themselves of the learning opportunities it provides.

Camp Community College Interim President Dr. Corey McCray asked how the college could partner with the people and organizations present to help.

Babineaux-Fontenot said helping create hubs that offer more than just food but also learning and training opportunities is part of the answer, and spreading the word of the options present is also part of it.

Annette Beuchler, chief executive officer of Obici Healthcare Foundation, spoke briefly, talking about her goal to figure out the best way to get fresh fruit and vegetables — not just canned and dry goods — out to the different areas served so people can walk to them or have access to them in their own communities.

“What we see here and in Surry and Sussex, where we also serve, there are food deserts,” she said. “We’re working in Surry right now to help them with the community grocery store that’s more of a quasi-farmer’s market versus local grocery, but the bigger problem is that you can’t get to these in your own community when you need it.”

She said her organization, which helped provide funding for Foodbank’s new branch and hub in Franklin, did listening sessions in each community it serves to see what the greatest need was. At one of those sessions, someone asked if the issue at hand when it comes to food was really one about personal responsibility.

She said she replied, “Sure, but different people have different options to be personally responsible, and I think that’s the important thing that we need to keep in mind is that not every age and every stage and every group has the same option for those foods. And so I would like for everybody to have that equitable option to choose what they eat every day.”

Babineaux-Fontenot responded, “One of the expressions that I only learned during the pandemic was that while we are sometimes in the same storm, we are seldom in the same boats. I think that’s true.”

She noted how there is an assumption in there that the man does not already know how to fish. She suggested that perhaps he does and all he needs is a rod or the right bait.

She later added that some philanthropic efforts, while well-meaning and led by smart people, are not as helpful as they could be because the leaders make the decisions on what a community and its people need rather than asking the people more directly. She emphasized the importance of bringing those community members to the table to hear from them and allow their input to better inform the efforts.

Jones Nichols brought up the role of public policy, and how it can be used to address food insecurity and systemic issues that contribute to it.

District Director Diane Kaufman, who was a representative of Sen. Tim Kaine at the discussion, mentioned institutional racism as playing a role in who is experiencing food insecurity, and Babineaux-Fontenot agreed.

Del. Clinton Jenkins, who represents the 76th district, including part of the cities of Suffolk and Chesapeake, spoke briefly at the end of the discussion, emphasizing that governmental efforts to combat food insecurity are local.

Other participants in the roundtable, including District Representative Nickolas Gabriel, who spoke as a representative of U.S. Rep. A. Donald McEachin, contributed to a discussion that ran for about 45 minutes.

Babineaux-Fontenot punctuated the talks with significant optimism about what is coming next for the area with regard to battling food insecurity and its underlying factors.

“I’m so confident about what you’re about to do here,” she said to everyone present at the discussion.