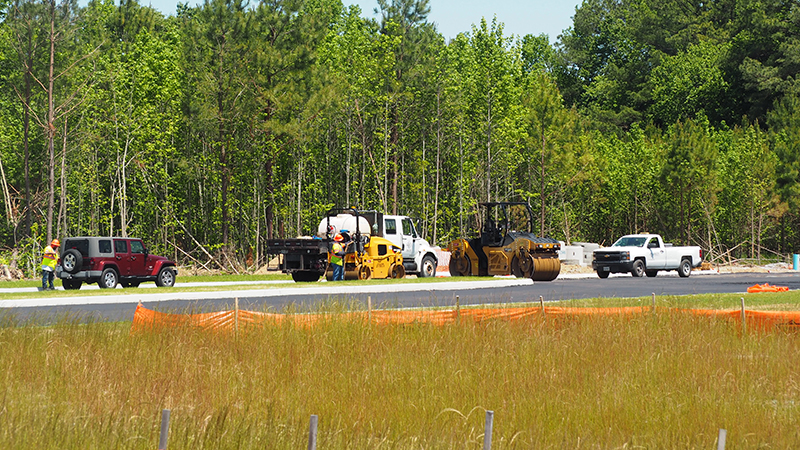 Construction has begun on a roadway leading from Carrollton Boulevard into a 210-unit condominium development known as The Crossings.

The Virginia Department of Transportation expects to exceed its $3.25 million budget for improvements to the intersection of Brewers Neck and Carrollton boulevards where a planned 210-unit condominium development known as The Crossings is to be built.

Now, the state is looking to Isle of Wight County to make up the difference.

The county has been working with VDOT on the construction of the project and with The Crossings’ developer on its design, which includes adding a left turn lane off the southbound lanes of Carrollton Boulevard leading into the development, an additional left turn lane leading from the highway’s northbound lanes to Brewers Neck Boulevard and one through lane leading from Brewers Neck Boulevard into the development. The scope of the work also includes improvements to the intersection’s traffic signals, roadway elevation, drainage and paving will also be completed, with all work expected to be complete by fall 2022 depending on weather conditions.

The county requested and was approved for $3.2 million in state funding for the project through Smart Scale, a VDOT formula for evaluating the cost versus benefit of proposed roadway improvements, with an additional $2 million worth of road construction coming from the developer. But VDOT has since advised the county there will be a projected shortfall of $53,000.

“After in-kind services were provided by the developer, the $53,000 is the remaining balance,” said VDOT spokeswoman Nina Ulrich.

On May 20, Isle of Wight’s Board of Supervisors voted 4-1 to approve the funding request. The dissenting vote came from Newport District Supervisor William McCarty.

“That’s just poor management from the state … I’m just not going to do it,” he said.

According to Isle of Wight’s transportation director, Jamie Oliver, VDOT recently received bids for the construction work that came in $1 million over the expected figure “due to the current market.”

“Honestly, if they put it on hold they’d probably get worse over the next 12 months,” she said.

Per state procedure, any VDOT project that exceeds its budget by $1 million or more must go back to the Commonwealth Transportation Board, which would throw the project back into the pool of road improvement proposals from every locality in Virginia vying for Smart Scale funding. At that point, the project would have to be re-scored as to its cost versus benefit and “we have no doubt that it will not score well,” Oliver said. “We do not think there is another way to move this project forward without contributing the $53,000.”

To avoid this, VDOT was able to find an additional $989,000 to cover the overage, but needed Isle of Wight to contribute the remaining $53,000, Oliver said.

Windsor District Supervisor Joel Acree was also reluctant to approve Isle of Wight County making up the difference, but ultimately voted in favor of the idea.

“To not do it for $50,000, sure I’d like to make a point but I also see our citizens sitting in line in traffic around the curve trying to get through an antiquated intersection,” Acree said. “They can’t go any longer and we can’t throw it back in the pool.”

Workers began clearing trees at the intersection last June in anticipation of starting construction on The Crossings’ first residential units this spring. To date, some stormwater management infrastructure has been built, as has some of the development’s entryway, but the condos and 234,000 square feet of commercial space have yet to break ground.

Per the plans, a new road, which will be named Spadia Way, will bisect the development, turning the T-intersection of Brewers Neck and Carrollton boulevards into a four-way one. To the right of Spadia Way will be the condos and to the left, a shopping center measuring upwards of 200,000 square feet. A series of commercial parcels along Route 17 will also be created. The developers haven’t announced any businesses as having committed to setting up shop on any of the commercial parcels, and Amy Ring, the county’s director of community development, said the county’s planning staff hasn’t received anything yet either with regards to a business expressing interest in one of the plots.

Plans for The Crossings began in 2002. An outside study Isle of Wight County Schools commissioned in 2018 projected 96 students entering the school system as a direct result of the development once everything is built out, though the division is anticipating an overall decline of roughly 240 students this September from its pre-COVID-19 enrollment.