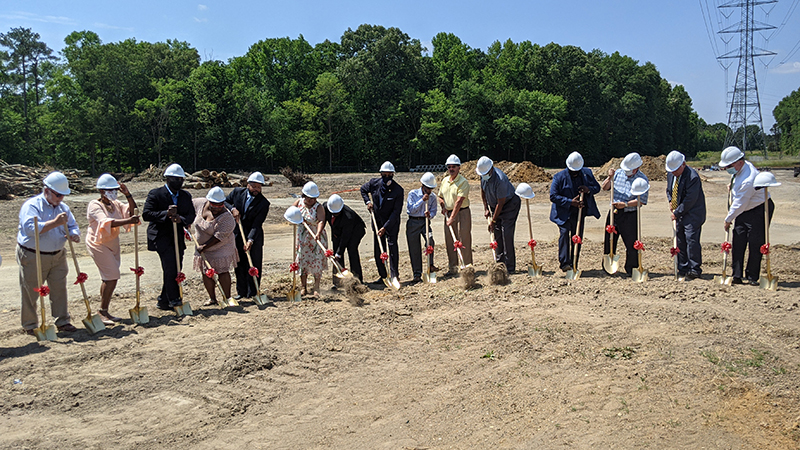 Suffolk Redevelopment and Housing Authority held a groundbreaking celebration for White Marsh Pointe at Eagle Landing May 27. SRHA has torn down the former Parker Riddick apartments and, across the street, it is in the process of renovating the former Cypress Manor apartments.

Tony Arline was 14 the last time he walked through the door of apartment 1169 in the public housing complex then known as Cypress Manor.

When he walked back in nearly 40 years later, following a May 27 groundbreaking ceremony for the reconstruction of the former Parker Riddick apartments across the street and the ongoing rebuilding of his former neighborhood, it looked nothing like what he remembered.

If no one had known the history of the rebuild, or known that the now-Eagle Landing apartments used to be Cypress Manor and their framework were still the same, anyone could have easily mistaken it for a brand new place.

Of course, across the street, there’s no mistaking that something new will eventually be built on the then-Parker Riddick and now-White Marsh Pointe property. Those buildings are being demolished and rebuilt completely.

Arline, who now lives in Texas but was back in Suffolk for the Memorial Day holiday, lived in the very same apartment that now was being used to show off as a model of a modern apartment, one that looks, from the outside to the inside, nothing like others in the same neighborhood still awaiting the same fate as his former place.

And that was, and is, the point of the project — to make public housing feel nothing like what many have come to associate with it — a run-down, undesirable area.

“Whoever moves back here,” Arline said, “it’ll bring their pride back.”

He marveled at the changes as he shared his own memories of his time in apartment 1169, and on the basketball court a trick shot away that’s going to get its own restoration. He said it was a nice place in 1982, but he recognized that it had changed and welcomed the current transformation.

“Now, when you look at this here, and you say you’re living here and they see this,” Arline said, “they’re going to go, ‘Oh wow, even though this is public housing, it doesn’t feel like public housing.’”

During the groundbreaking ceremony on the future White Marsh Pointe community property, public housing and elected officials alluded to the long, winding and seemingly pothole-filled road to get to where they are to do the work on the more than $23 million project.

“This has not been an easy task getting to this point,” said Quinton Franklin, chairman of the Suffolk Redevelopment and Housing Authority’s board of commissioners. “But we have all … dug in to make sure that this comes to pass.”

Snipes, in noting the authority’s 50th anniversary, sketched out public housing’s history in the city, and said the project is the culmination of 10 years of effort.

“The changes under way reflect a community that cares, advocates and provides upgrades and rehabilitation for the most basic human need, a roof over their heads,” said SRHA Executive Director Tracey Snipes.

In 2019, the authority lost out on a 9% tax credit to rebuild the Parker Riddick apartments due in part to what has previously been acknowledged by Snipes as mistakes in the application process.

“There were some errors that were made in the application, but in all honesty, we could have done a perfect application and still not been funded,” Snipes told the board in 2019. “We would have increased our odds, but there was still no guarantee that we would have gotten the 9%.”

At that point, the authority’s board approved an alternative plan to pay for rebuilding Parker Riddick and rehabilitating the Cypress Manor apartments.

The board ultimately voted to apply for a 4% tax credit to go toward tearing down and rebuilding Parker Riddick’s 93 units and rehabilitating Cypress Manor’s 113 units, all of which will be converted to Section 8 project-based voucher assistance housing.

Parker Riddick residents were given those housing choice vouchers to find alternative places to live while it is under construction, and Cypress Manor residents have shifted to other units within that complex as that project progresses building-by-building.

Besides issues with the financing, some housing authority board members and council members questioned at the time whether all of Cypress Manor, like Parker Riddick, should be torn down due to issues with asbestos.

However, at the time, Peter Behringer, a co-partner of TCG Development Advisors LLC and a co-owner of White Marsh Pointe at Eagle Landing, said that asbestos abatement is subject to state and federal requirements. And, he said, it was not feasible to do complete demolitions of both housing communities.

Franklin, at the time vice-chairman of the board, said it would have been irresponsible to pursue the 9% tax credit when it was highly unlikely that the SRHA would receive it. He said that it had to consider that residents were already living in asbestos, and without doing anything, or delaying it further, they would continue to live in it.

At around age 9, as he recalled, Franklin said he knew he would have some role to play in public housing. Having already lived in two such communities at that point, he met then-SRHA executive director Clarissa McAdoo at First Baptist Church Orlando. She spoke about one Orlando community in which several affordable homes were built, and later, Franklin asked questions about how and why things were done the way they were.

Instead of brushing him off, she answered his questions, and put Franklin to work as an intern at the housing authority. He said McAdoo and Snipes didn’t just take him under their wing, they invested in him.

Having been born in Colander Bishop Apartments and growing up in Hoffler Apartments, Franklin grew up and moved away, but he said he never lost sight of the fact that it was the investment made to him by McAdoo, Snipes and other housing authority employees that made him who he is today.

Franklin said seeing the ongoing transformation from Cypress Manor to Eagle Landing, and looking out on the former Parker Riddick area to be rebuilt into White Marsh Pointe, gave him swelled pride.

Del. Clinton Jenkins, who grew up in the neighborhood surrounding the two public housing complexes and remembered them being built in the 1970s, credited people such as now Vice Mayor Leroy Bennett, former housing authority board member and School Board member Thelma Hinton, and his own wife and current School Board member Karen Jenkins — “I have to mention her, you all forgive me, but I’ve got to go home,” he said to laughs — as being staunch public housing advocates.

Bennett said it would help assure residents that city officials are looking out for their well-being.

“It’s going to change the lives of a lot of people,” Bennett said. “It’s going to give them a little bit more feeling that they’re being thought of as part of the city.”

Jenkins called for people to stay invested in the lives of those who live in public housing — stay here, plant and dig in, he said.