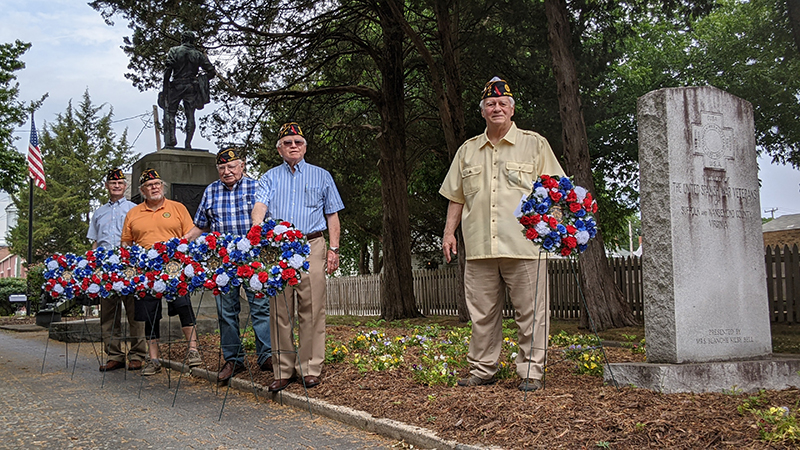 COVID-19 may have altered its plans to honor the fallen for Memorial Day, but it still didn’t stop members of the Norman R. Matthews American Legion Post 57 from pausing to pay their respects during a brief wreath-laying ceremony May 29 at the Cedar Hill Cemetery.

Before the handful of members laid the wreaths, Fourth District Commander of the American Legion and Post 57 Commander Joe Garlitz said a brief prayer for the fallen:

“Oh God, our Heavenly Father, You have blessed us with brave men and women who are willing to defend our freedom. May Your protection and grace surround them each day. Let Your healing hand be upon those who suffered wounds and injuries. May those who have made the ultimate sacrifice rest forever in Your holy presence. Comfort the families who mourn and are left to remember the precious lives of their loved ones. Help us honor and support them. Let us ever be mindful of each sacrifice made on behalf of the American people by our sons, daughters, husbands, wives, mothers, fathers and friends. Amen.”

Garlitz, along with First Vice Commander Harrell Jory and his wife Rose, past Commander Bob Grady, Finance Officer Denis Confer and Adjutant Curtis Mackenzie, laid wreaths at monuments for the Spanish-American War, the Civil War, World War I, World War II, Korean War and the Vietnam War. They also remembered other conflicts like the War on Terror.

According to Garlitz, Post 57 has been holding a Memorial Day ceremony for about 50 years, but the past two have been smaller events due to COVID-19. He hopes next year to return to a more normal ceremony on the morning of Memorial Day.

Garlitz said they wanted to place the wreaths earlier in the weekend to allow more time for people to stop by the cemetery and pay their respects.

“Regardless of what’s going on in the country, we don’t want our veterans and the soldiers in the graves to be forgotten,” Garlitz said. “We want them to always be remembered.”