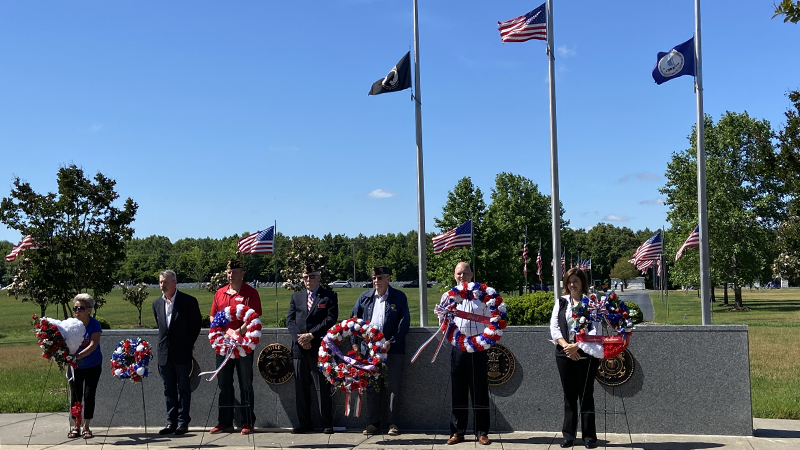 Donated wreaths were placed in front of the seals for each military branch during the Albert G. Horton Jr. Memorial Veterans Cemetery Memorial Day Remembrance Ceremony.

Under a clear sky, a crowd gathered to pay respects to the fallen military members at the Albert G. Horton Jr. Memorial Veterans Cemetery.

After a weekend full of rain, the skies cleared to allow a small crowd to attend the annual Memorial Day Remembrance Ceremony at the cemetery. Veterans, friends, family and fellow Americans gathered to remember those who gave their lives for our country.

Pastor Donald Milner from Radiant Life Ministries opened the ceremony in prayer to thank God for those who never came home so that America could remain free.

“We thank them for their sacrifice and promise that we will carry on the legacy to ensure that they did not die in vain,” prayed Milner. “Further, we pray that you strengthen and protect all our military personnel serving presently and in the future. Give them the courage to face whatever comes. Protect them in battle and help them prosper in times of peace. Watch over their families as You watch over us all.”

The Veterans of Foreign Wars Post 2582 hosted the 2021 ceremony. Its post commander, Danny Hockman, spoke to the crowd. Hockman is a chief petty officer with 24 years of active duty service with seven deployments in the Navy. He is currently serving as the maintenance and material management coordinator onboard the USS Tortuga. Hockman reminded the crowd of what the day was about and why Americans set aside the last Monday in May each year.

“It is for a good reason that we gather here today with countless other Americans across the nation and across the world regardless of race, creed or political persuasion, we gather in unified and solemn remembrance to remember the sacrifices of those who answered to their nation’s call and have willingly laid down their lives for our freedoms,” Hockman said.

Hockman noted that the past year has been a challenge as Americans’ way of life changed in many ways. In light of the challenges, it would be easy to postpone this ceremony, but according to Hockman, the men and women who sacrificed their lives for their country deserve more than excuses of inconvenience.

“Today, we push through the fatigue and pandemic exhaustion to come together to honor and pay our respects for those lost on the front lines of battle,” Hockman said. “On this Memorial Day, as we join together, whether it’s face to face or only in mind and spirit, we remember their names, their faces and their service legacies so that their sacrifices are never forgotten.”

Hockman ended by saying that no matter what the difference may be between those who risk their lives in service, this is the land of freedom and liberty and the home of the brave.

Veterans in the crowd were also recognized for their service and support of their fellow soldiers, sailors and airmen who have gone before them. As there are no more World War I veterans, a moment of silence was acknowledged in their honor.

The office and field staff of Albert G. Horton Jr. Memorial Veterans Cemetery were thanked for their work behind the scenes as they maintain the cemetery’s appearance and organize funerals and ceremonies that take place.

To end the ceremony, wreaths were placed by the memorial displaying the seals for each of the five branches of the military. The wreaths were donated by Gov. Ralph Northam, the Virginia Department of Veteran Services, American Legion Battalions and the family of Maj. William Emerick.

Much like the days for those on bases overseas, the ceremony started with the national anthem and ended with the playing of “Taps.” Even though the Memorial Day weekend came to a close, the sacrifice the men and women make in uniform for their country will never be forgotten.