Elementary School Teacher of the Year 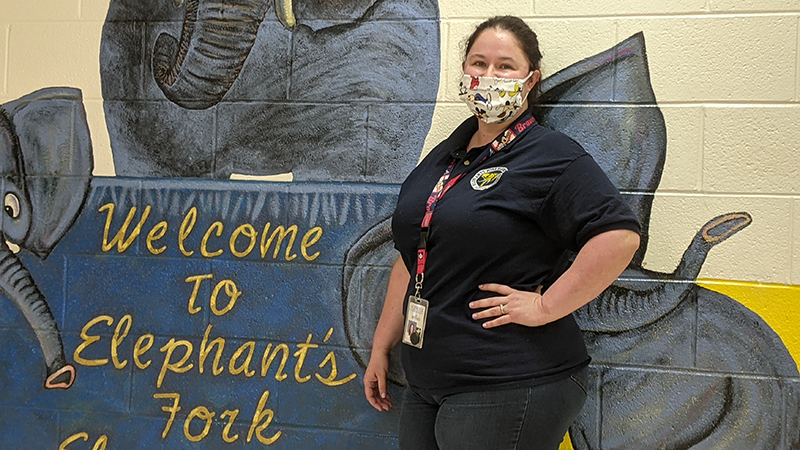 Ashley Nettles has used the morning meeting as a way to check in on her students’ social and emotional needs, knowing that in the middle of the coronavirus pandemic, giving them space to talk about their feelings and things that may be stressing them out.

But she didn’t limit her check-ins to just a few minutes in the morning.

Nettles, a fourth-grade teacher at Elephant’s Fork Elementary School, opened up her virtual lunch block and invited her students to eat lunch.

“The majority of the time, I actually stayed muted,” Nettles said, “and the kids were talking about the latest video game they got, or asking how their siblings were doing, and I would just quietly sit there and chime in. But it was very important for me that the kids could be social with one another even in this setting.”

At first, she took on the role of an investigator to get past “looking at a square with their face” to break down barriers in connecting with her students. Nettles also made sure to share things about herself, talking about her dog, a yellow lab named Chester, and her other interests.

Nettles, who has been teaching for six years, continued as the grade level’s virtual teacher even after some students began returning to school in person in the spring. She said it’s only natural that kids wear their worries, unlike the ‘kids are resilient’ stereotype.

“That’s always been one of my biggest things,” Nettles said. “When I was a kid, people were like, ‘Oh, kids don’t have stress.’ Well, that’s not true.”

Elephant’s Fork Principal Jessica Avery said Nettles, who was named Suffolk Public Schools’ City-Wide Elementary Teacher of the Year, has a natural ability to connect with her students, even virtually, when it is more difficult to get visual, audible or other cues than when she can see them face-to-face.

Avery said it is one thing to be able to recognize by the look on their face if a student has had a rough morning or needs a little more emotional support, but to pick up on it in a virtual environment as Nettles has is a little more difficult, and she did so without complaint.

“She carries that weight in such a manner — it’s what I want for my own kids, and I’d want my kids to be educated by a teacher like her,” Avery said.

Her students weren’t the only ones she has been helping. Nettles spent a lot of time, especially early on in the year, helping the parents of her students adjust to the technology. Throughout the year, she has worked collaboratively with the other Elephant’s Fork staff members.

But when Avery walked in to observe Nettles’ classes, she noticed little difference between the in-person and virtual classes.

“She’s one of the teachers that observing virtually felt almost identical — meaning the feelings of the kids, the interactions,” Avery said. “When you walk in the classroom, kids would say, ‘Hey Ms. Avery, hi Ms. Avery.’ You could feel the love, the comfortability in the class, and you could visually see it. On the computer, it took a minute to get used to finding that feeling and making sure we still see that connection.

“With Ms. Nettles, from the get-go, it was very clear. You hear the laughter, whether it’s her laughing or the kids laughing, just like you would in the classroom. I think this year, in particular, by her just being able to have that ability, naturally, to connect to the kids, and that helps them.”

Even her husband, David, had a case of mistaken identity when he heard laughter coming from their kitchen where Nettles was working. He thought she was talking with one of her friends. Turns out, she was talking about coding with her students.

But it’s that authenticity that at once comes naturally for her, and it’s also the only way she knows how to be with her students.

Nettles, 29, said she didn’t have to adjust much to the technology since she enjoys using technology in her classroom, but she did have to make adjustments. In particular, she felt the need to soothe anxieties from the parents of her students, holding separate sessions for the parents to work through the technology and other virtual learning issues so they could best help their children.

“It definitely wasn’t as easy as just flipping the switch,” Nettles said, “because there were a few things that I, as an educator, was wanting to keep consistent. And one of those things was a classroom environment. Another one was working with my parents. And this was different for everybody — for myself, for the kids and the parents.”

Nettles, who earned her bachelor’s degree in interdisciplinary studies and her master’s degree in elementary education from Old Dominion University, said being there for her students and providing a happy space wasn’t just for them. It was for her too.

“The saying, ‘it takes a village,’ has changed so much this year,” Nettles said. “It takes a virtual village. But I have a lot of great parents and a lot of great students and the support here at the school too.”

Nettles, since she was in the fourth grade at Southwestern Elementary, knew she wanted to teach.

“I am Suffolk 100%,” Nettles said. “I was born and raised here, and even when I went off to college and I knew I wanted to be a teacher, I always knew I wanted to come back to Suffolk because if I could just put a fraction of an ounce of what Suffolk Public Schools gave me as a child, and give that back, that meant a lot to me. But my fourth-grade teacher — Mrs. Morris — she was the first teacher I remember building relationships, that I could tell that she wasn’t just the teacher.”

Last year, Nettles made it her mission to track her down and thank her, “and it was like I was seeing a celebrity all over again.”

Avery believes that Nettles’ current students are seeing one in their Elephant’s Fork teacher now.

“I promise you that the impact that she’s having on these fourth-graders now,” Avery said, “fast forward a few years, they’re not going to forget that year they had to go through this pandemic and school virtually, and their teacher, they could depend on their teacher so much more than just for their actual education academically, but how she was there for them socially, emotionally, just helping them grow.

“Ms. Nettles getting the (elementary) teacher of the year for the district is well-deserved. When you think as an administrator what you would hope for a teacher to be in your building, she epitomizes that.”