Locals react to the lifting of the universal indoor mask mandate 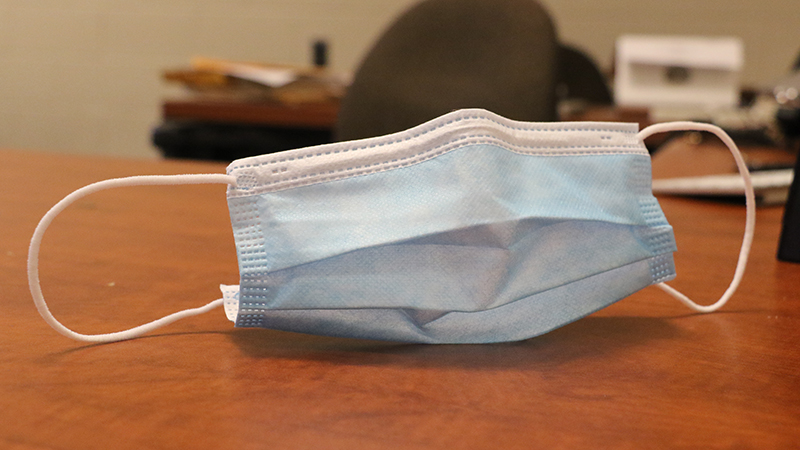 There are differing reactions among the public to the recent lifting of the state’s universal indoor mask mandate.

The lifting of the state’s universal indoor mask mandate has been met by different reactions from people in the region, with some finding it long overdue and some opting to keep wearing a mask part- or full-time for varying reasons.

Facebook users have been sharing their opinions after the newspaper posed questions about masks.

“If people still want to wear one, then I’m fine with that, as long as they don’t give me a hard time for not wearing one,” Turner stated.

Facebook user Jennifer Marie noted being thankful the mandate is over.

“It was ridiculous to begin with,” Jennifer Marie added. “If people choose to still wear them, more power to them.”

But Facebook user Nicole Myles said it is too soon to lift the mandate, adding, “Me and my children will still wear our masks going out. It’s for our safety.”

In agreement with Nicole Myles was Facebook user Darlene Symborski.

“I personally believe it’s too soon to lift the mask mandate as there are still many who cannot get vaccinated such as children under 12 years old,” Symborski wrote. “However, either way, I will still continue to wear a mask for the foreseeable future.”

Facebook user Debbie Strickland wrote, “I took mine off at Walmart but didn’t feel right about it. I’m going to continue wearing it. I don’t believe a lot of the anti-maskers got vaccinated.”

Some people took issue with the government putting a mask mandate in place to begin with.

Facebook user Kathie Sinteff Stuckey said it was “long overdue that we got freedom of choice back. I’m not wearing one but respect others’ choices to continue. Our governor has abused his [executive powers,] in my opinion. I’m vaccinated. Now get masks off our children, and let’s focus on living again. This shutdown is no way to go through life.”

Facebook user Taylor Jamie Fleury wrote, “It was never the government’s place to ‘mandate’ [masks],” and then parenthetically added, “By the way, mandates are not laws — our country and the commonwealth of Virginia were never intended to be run by executive order or mandate.”

Some people cited health reasons or working in the health care field for choosing to continue wearing their masks.

Facebook user Denise Artis wrote, “I will continue to wear my mask. I have a lung disease, on oxygen 24 hours. It’s a must. I look out for number one.”

Facebook user Lisa Babb Pope said, “I will wear one even though I have the shot, but it’s safer for me to wear one because of my heart condition and COPD.”

Facebook user Chrissy Crystal cited the intent to wear one regardless of the presence of a mandate.

“I work in the medical field,” Crystal wrote. “I just prefer it.”

Some made it generally clear they favored continuing to wear a mask even if they had been vaccinated.

Facebook user Toby Conner said, “I was vaccinated in April and still wear one when I go out. You never know who around you is more likely to get sick, better safe than sorry.”

Undecided about the timing of Gov. Ralph Northam’s decision to lift the mandate was Facebook user Rita Truitt.

Quite a few people who clearly stated whether or not they would wear a mask made a point to exercise civility, refraining from insisting that their approach be universal.

Facebook user Jason S. Westfall wrote, “I won’t be wearing mine, but have no opinion one way or the other about folks who will. I think people can be responsible for themselves and their families.”

Facebook user Priscilla Griffith wrote, “I have been fully vaccinated and am glad we don’t have to wear a mask, but I do wear it in very crowded public places. I have no issue with anyone doing what they are comfortable with.”

Facebook user Jon Smith wrote, “I understand why a lot of people were opposed to dropping the mask mandate with the constant fear in the news cycle, but with vaccinations on the rise and a ton of real-life data available, more people are comfortable with the drop. As for me, I’m comfortable not wearing a mask out in public but understand that others are not. I also think it’s a business’s right to require them if they choose.”

In a May 28 interview, Western Tidewater Health District Director Dr. Todd Wagner said that as a community member, he has been somewhat surprised by what he has been seeing.

He noted there are still people not vaccinated, so if they lack the vaccine, it is good if they are still wearing masks.

But Wagner added that momentum is building for unmasking.

“By the day, I see more and more people unmasking, and I think it’s a combination of both people feeling more comfortable with that, and then by each day there are more individuals getting vaccinated, so I think it’s kind of a duplicative thing,” he said. “I think both are occurring.”

At this point, Wagner said his advice for people in his district is going to be in line with what the Centers for Disease Control and Prevention is saying.

“And that’s basically if you’re fully vaccinated, you’re much better protected, and so the need to mask is obviously much less,” he said. “There are certain occasions when individuals are immune-compromised or come into contact with folks that have medical issues where masking and distancing may be the case, but those are going to be in sort of the outside circumstances, or not your normal circumstances.”

He also noted that in the governor’s executive orders, there are some restrictions still in place in schools and health care settings, in particular.

“Those are still requiring masking because we still have a number of people in those populations that have not been vaccinated,” he said.

Though many of the mask and social distancing measures have been removed, Wagner did encourage continuing the common courtesies present even before COVID-19 — copious handwashing, sneezing into the elbow and turning away from individuals when coughing.