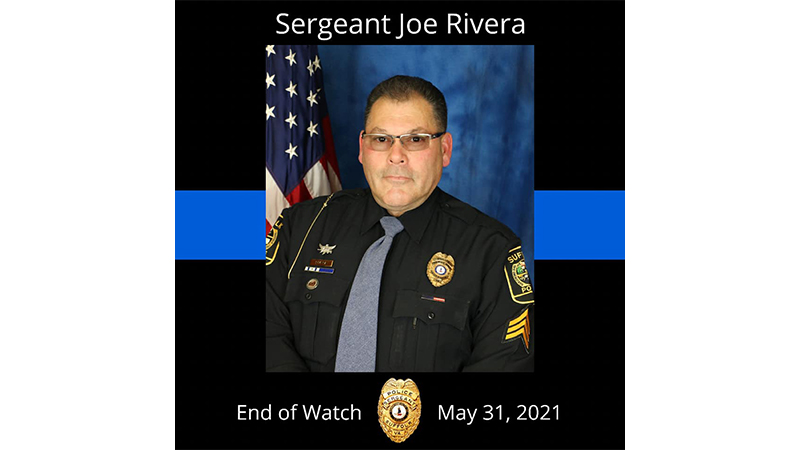 A Suffolk Police Department sergeant lost his battle with COVID-19 earlier this week.

Sgt. Joe Rivera, 59, died in the hospital at the University of Virginia early in the morning on May 31 after being transferred there after weeks in another hospital. He had tested positive for the virus on April 21 after feeling severely lethargic for quite a few days, close family friend Estelita Buie said Wednesday.

Rivera joined the Suffolk Police Department in 2007. He served on the SWAT Team, Honor Guard and Neighborhood Enforcement Team, among other duties. He also trained numerous new recruits and shared his musical talents with many, according to a Facebook post by the Suffolk Police Department. Rivera was also a proud Marine Corps veteran and spent spare time training dogs.

“Our hearts are heavy as we mourn the loss of Sergeant Joe Rivera,” the Facebook post stated. “Our deepest condolences go out to Joe’s wife, family, colleagues and friends during this difficult time. Joe’s passing is a loss for not only our Suffolk Police Department family but for the City of Suffolk and the citizens whom Joe selflessly served.”

According to Rivera’s obituary, he was a native of Puerto Rico and is survived by his wife of 18 years, Pamela, a daughter, a granddaughter, and many siblings and other family.

Interim Police Chief Al Chandler had this to say about Rivera: “We are deeply saddened by the loss of our friend. He was an amazing officer, family man, friend and mentor. Though gone too soon, we appreciate the time we were blessed to have Joe in our lives. His excitement, love of country, dedication to the citizens of Suffolk and care and concern for everyone he met will be memories we will carry in our hearts forever.”

A celebration of life is planned at 11 a.m. June 10 at Westminster Reformed Presbyterian Church, 3488 Godwin Blvd. The family requests that those in the military or law enforcement officers wear their uniforms, and for all others to wear blue. Burial and military/police honors will follow at Albert G. Horton Jr. Memorial Veterans Cemetery in an invitation-only ceremony.

The department will be shrouding its badges until sunset on the day he is laid to rest, the department’s Facebook post stated.

Buie said the Riveras were dear friends for many years.

“Joe and Pam have been dear friends of mine and my husband, Maj. J.D. Buie, for almost 15 years,” Buie said Wednesday. “We have shared a lot with each other over the years but the thing that sticks out the most for me personally is his caring and calming nature. There have been times during the course of our friends where my husband has been out of town for training … and during that time I would get a daily call from Joe or he would randomly stop by our house to assure everything was OK. It was simply his nature.

“Joe would do anything for anyone,” she continued. “It’s our turn to do for his wife as he would do for us.”

A GoFundMe started by Buie for the Rivera family is available at www.gofundme.com/f/covid-relief-for-sgt-joe-rivera.

Rivera was brought home from Charlottesville on Tuesday in a processional with assistance from the Isle of Wight Sheriff’s Office, Windsor Police Department, Suffolk Fire & Rescue and the Suffolk Sheriff’s Office.

City spokeswoman Diana Klink stated in an email Wednesday that a determination on whether Rivera’s death will be treated as a line-of-duty death is still under way. The Virginia General Assembly earlier this year passed bills, later signed into law by Gov. Ralph Northam, to cover workers’ compensation for police officers and other first responders who are diagnosed with COVID-19. The law establishes a presumption that COVID-19 that causes the death or disability of such law enforcement officers is an occupational disease.