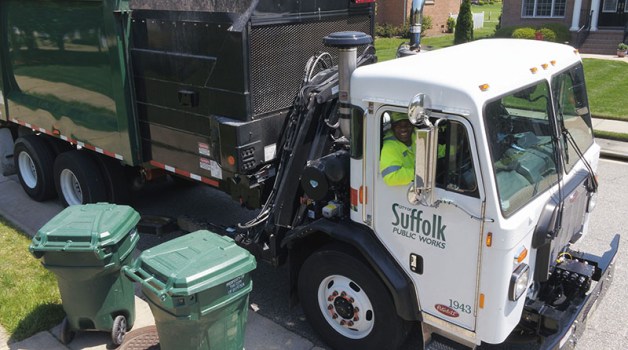 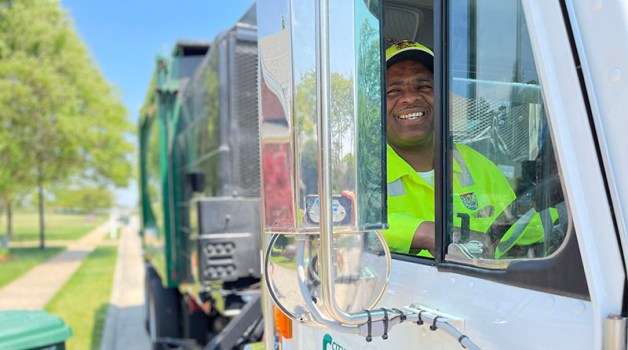 If you see Bubba in his truck, give him a wave, a wide berth and enough space between your trash cans, please.

From the time Alfred “Bubba” Copeland picks up his refuse truck at 6 a.m. until the time he finishes his route at least 10 hours later, he will have collected trash from more than 1,200 Suffolk homes and made at least two trips to the regional landfill off of U.S. Route 58.

But that 10 hours can be a best guess on some days, too, since there’s no refusing the refuse if he’s not finished in that time span.

If traffic’s heavy, or there’s extra trash to be collected, or another truck on another route breaks down, it’s all got to get in the truck and to the landfill before the end of his shift.

And with the specific maneuvering he has to do, there’s no time for looking back. Literally.

Though Copeland sees everything behind him, he doesn’t turn and look back at them, instead, he relies primarily on the multiple side mirrors he has, and occasionally, the video monitor which shows a camera view behind him.

It’s one thing while driving to occasionally turn one’s head to check a blind spot before passing someone on the highway.

But imagine having to do that thousands of times per day along his route. If Copeland did that, he would have to keep a ready supply of ibuprofen in his truck for the sore neck he would have.

“I always learned on my mirror,” Copeland said. “If I’ve got to turn my head the whole day, it’s going to hurt my neck.”

On a pleasant spring morning, Copeland was collecting trash in the posh neighborhood The Riverfront at Harbour View in North Suffolk.

While the job is very much routine and can be monotonous, Copeland has to account for a number of things throughout the day — chief among them keeping an eye for children in the neighborhoods he drives through and aligning his truck’s forks with the cans so it can grab and lift them to the top of the truck and dump the trash in it.

By 11 a.m., Copeland has already filled up his truck, emptied it at the Southeastern Public Service Authority’s regional landfill — which is at least an hour-long process coming from the northern reaches of the city — and, after cleaning out his truck, is back for a second round.

That load was among the more than 13,000 tons of Suffolk trash taken there and to the John C. Holland landfill in the first four months of this year.

If he doesn’t clean it out, trash will build up around the blade and affect how well he can compact it. If there is too much buildup, Copeland has to get inside the truck to clean it, something he would prefer not to do.

He answers this question before it’s asked: No, he has never had a dead body in his truck. He has seen dead animals, though, and he and his truck appeared briefly in a locally-filmed movie.

As he stops at each home, he explains how he has to position the truck around potential obstacles that can make the trash collection more difficult.

In one instance, Copeland, whose driver’s seat is on the right side of the truck, had just a few feet between his truck and a vehicle parked in front of a home. In a few other instances, he had cans that were too close to one another. Cans are supposed to be positioned a socially-distanced six feet apart; some, though, will be as close as six inches. While not impossible to grab the cans automatically, it leaves little margin for error.

“If they’ve got something in the way, I’ve got to put the truck in a position in which I can get the can,” Copeland said. “I can’t just pull up at a certain spot, because each can is different. Each customer has a certain way to set it out.”

Factoring in all of these things, Copeland is in no hurry.

“You have to keep in mind that you have to be safe,” Copeland said. “You don’t want to get to the point where you’re trying to rush through. I’d rather than be slower, and safe, than to be fast.”

Copeland, a Suffolk High School graduate, says he is thankful for his job, having come from a series of retail and warehousing jobs. He had not intended on becoming a driver, but when afforded the opportunity, he decided to get his commercial driver’s license.

He’s driven in many trucks over the years, but his current one is special. In it is a plaque that reads, “This Unit Ordered for Alfred ‘Bubba’ Copeland by Carlos Ward Sr.” It’s something that motivates Copeland.

Ward, like Copeland, graduated from Suffolk High School and worked with him in the city’s Public Works Department. Ward served in many capacities over his 31 years, eventually becoming assistant director in 2019 before he died late last year.

“I got choked up because Carlos had died,” Copeland said. “But they thought enough of me to get together and come up with this little gesture right here.”

One piece of advice Copeland got early on in his career has resonated and stuck with him: Always approach the job like it’s your first day.

It took him about two weeks to learn how to drive the truck. Now more than 20 years into it, Copeland still finds it challenging amidst the routine, but it’s a profession Copeland finds honor in.

“It’s a job that people look down on because it’s trash,” Copeland said, “but can you imagine this not getting collected?”