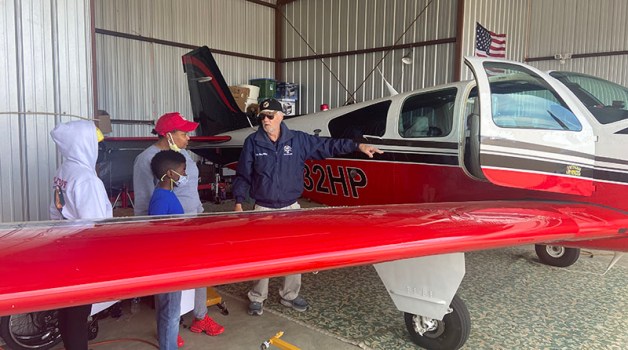 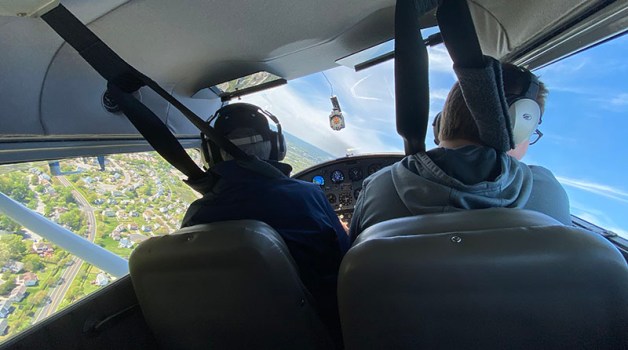 Gary Wiley turns the plane to head back to the Suffolk Executive Airport. 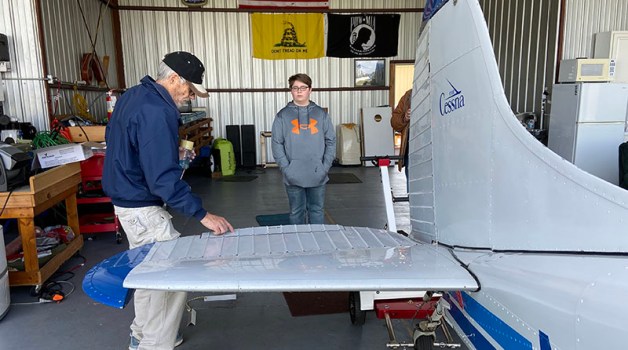 Gary Wiley shows the different parts of his Cessna 170B and how they work and what they do in the air to make the plane fly.

Most people get behind the wheel of a car before they get in the cockpit of an airplane, but kids in Suffolk have the opportunity to do just the opposite.

The Experimental Aircraft Association’s Young Eagles program gives kids ranging from 8 to 17 years old a chance to learn more about aviation. Since its start in 1992, the program has flown over 2.2 million kids to introduce them to the world of flight.

Gary Wiley is a Vietnam veteran and recreational pilot who is one of the 50,000 volunteers who donates his fuel and time to teach kids in Suffolk about flying. Since he started participating 17 years ago, Wiley has flown more than 320 kids.

“It’s fun for me to fly the kids and share my passion with them,” said Wiley. “It’s really a neat idea. I enjoy doing it.”

The program started as a response to a decline in pilots as many are reaching retirement age and there are not enough coming up to take their place. Thousands of pilots under the age of 40 can trace their love for flying back to participating in the Young Eagles program. Wiley himself knows of five of the hundreds he’s flown that have pursued a career as a pilot.

During weekends that the weather looks favorable, Wiley makes a Facebook post inviting those interested to be a part of the Young Eagles. Being a free program, parents respond with interest and meet Wiley at his hangar at the Suffolk Executive Airport.

“It was a new experience, and it was really fun,” said Jourdan Spears, a 13-year-old Young Eagle who rode with her mom and 9-year-old brother during their flight. When asked if she would do it again, she gave a definite yes.

To start the lesson, Wiley shows the kids attending the different parts of his plane and what to check before taking off. He first drains a bit of octane from his Cessna 170B into a bottle to check for water that may come in from rain or condensation. The octane has a blue dye in it so that the water can be visible. Next, he moves on to showing how the parts of the plane move and what that means in the air.
The nose is also checked for bird nests and any tools that may have been left during the plane’s annual inspection. Wiley also checked the oil levels.

“You can’t pull over on a cloud and park if you run low on oil,” he quipped.

After the introduction to the plane, the Young Eagles load up into the four-seater plane. Depending on how many Young Eagles sign up, multiple flights may occur, giving family members the chance to ride along.

“I thought it was an amazing, great time,” said Datoya Spears, Jourdan’s mother.

Once in the sky, Wiley pointed out landmarks of the area you can see on such a clear day. While only 600 feet in the air, Downtown Norfolk is visible, and once leveled out at 2,000 feet, the silhouette of the hotels on the Virginia Beach oceanfront can be seen on the horizon. The Cessna can go up to 13,000 feet, but for the Young Eagles, Wiley levels it out around 2,000.

Once in the air at the desired height, the Young Eagle lucky enough to get the front seat can take their turn flying the plane.

“It was fun but weird,” said Camoren Creech, a 13-year-old Young Eagle.

In the backseat, Camoren’s dad, Jonathan Creech, got to ride along as Camoren got to fly during his first time, as Wiley calls it, “leaving planet Earth.”

“It was pretty fun,” said Creech. “It’s an experience I haven’t had in 30-some years. I was too young to remember what it was like in a plane.”

At the end of the flight, each Young Eagle gets a certificate for participating and the time put into a logbook. The certificate and logged time go towards obtaining a pilot’s license if the Young Eagle chooses to do so. Being a part of the program gives the students free access to an online pilot training course, made possible by Sporty’s Pilot Shops, located in Batavia, Ohio.

For more information about the program, visit youngeagles.org.