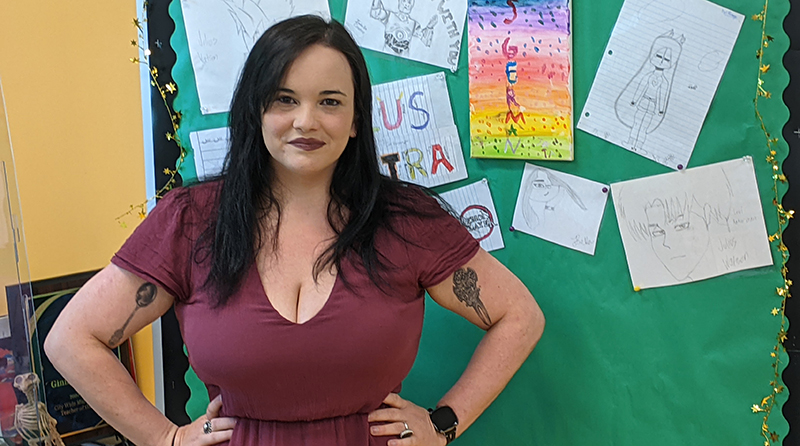 If you’re a teacher and you’re in the middle of being evaluated, and then the superintendent walks in and tells you that you’re the city-wide middle school teacher of the year, it’s a safe bet that the evaluation went well.

For Ginny German, a sixth-grade English teacher at Col. Fred Cherry Middle School, that’s exactly what happened. She said this year of teaching through the COVID-19 pandemic has been a unique experience.

“It’s kind of a lesson in improv comedy,” German said with a chuckle. “Teaching is like 90% improv comedy. This year, it’s, maybe, 96%, 97% improv comedy. You have to learn to be flexible and it’s really also about trial and error, what is working and what isn’t, adapting to meet the needs of your students.”

But she didn’t have too much difficulty connecting with her students, despite having to teach virtually.

Her homework assignments haven’t been straight-up English assignments as much as they’ve been focused on social-emotional learning, using them as an opportunity to learn about her students. And with a turn-in rate of 95%, she’s gotten plenty of buy-in, to the point that when she didn’t assign homework for the entire week before spring break, her students complained.

“I know a lot about my kids just because of little things like that, or that little early startup time where we’re waiting for people to login, we can talk, listen to music, interact with one another,” German said.

She also starts every lesson with a warm-up drawing activity of a noun. For one lesson, she had them draw an iguana, and after that, they write sentences about it, practice their writing skills and work on parts of speech, verb tense, root words and overall sentence structure.

“It’s to give routine,” German said. “Routine is always important to establish, never more so than this year. It’s fun to watch what they do, and I think they get really into the drawings, and I share them on the screen so they can see each other’s (drawings).”

German said they’re learning something without even realizing it.

“You have to trick them,” German said. “You trick them into learning, absolutely, 100%. It’s a magic trick.”

Her engagement with her students is something her principal, Daniel O’Leary, has noticed. As a firm believer in the ‘learning is loud’ concept, O’Leary wants to see teachers engage students in ways that encourage and require them to explore, discover and discuss.

“Ms. German has consistently taken the extra mile attitude toward everything and everyone she comes into contact with,” O’Leary said. “Her teaching philosophy is ‘love and loud,’ which ensures that all of her students are greeted each day with a safe and accepting environment.  Every child feels valued and confident in their skills.”

German said she shifted her focus this year and altered her priorities.

“I want my students to feel safe, and I want them to feel acknowledged, and I want them to feel capable,” German said. “So I thought about, what are the things that I can do to make them feel safe and acknowledged and capable. I want to give them things that I know they can be successful on. And so, things like an SEL (social-emotional learning) homework check. No matter what you tell me, you’re going to be successful.”

In one such homework assignment, students read a comic strip about a candy bar and then told German what ingredients they would put in one and what it would be called.

She also uses a chart of characters to get students to talk about how they are feeling. The students tell her who they are on the chart and why, and it aids her in identifying what they are going through and how she can help them.

“One of my primary tenets as a teacher is that I don’t think students can learn without feeling loved,” German said. “And every year, I want them to know that I care about them, that they’re respected here and I’m here for them. And I think that establishing that is crucial.”

She’s candid with them about how she became a teacher, and shares with them that she didn’t like school when she was younger and would often not turn in assignments, do projects or even show up — “I would sleep or draw or read through class,” German said.

It’s that understanding that helps her relate to her students.

“I try really hard to remember what it was like to be a student,” German said, “and acknowledging that they have challenges and they’re human beings too. Sometimes I don’t want to do something. Why would I ever stick a kid through something that I didn’t want to do?”

German, who received a bachelor’s degree in English literature — “it’s my degree in unicorns, basically,” she jokes — and a master’s in secondary education from Old Dominion University, got into teaching in spite of her passive interest in school growing up.

When she was looking for a master’s program, she found one in which all of her tuition would be paid for as long as she committed to at least three years of teaching. She was also influenced by author and former teacher Jonathan Kozol, who has written extensively about inequalities in public education.

“It was crazy,” German said. “I was working full time, I was teaching full time, I was waiting tables, I was 23 years old and a mess, going through grad school, trying to get my life together, and I got placed in a middle school — in the seventh grade — and I loved it.”

She thought she would teach high school, but said teaching middle school is plenty satisfying.

Beyond teaching, one of German’s passions is working during the summer for Horizons Hampton Roads, a non-profit, for the past nine years. “It’s my heart and soul,” she said.

German, 31, is finishing her third year at Col. Fred Cherry after previously teaching at John Yeates Middle School and before that, at William E. Waters Middle School in Portsmouth.

She has focused on building critical thinking skills and getting students to analyze what they read. Everything she does is cross-curricular. When students read, they’re reading about science, history or other things intrinsically interesting. She jokes with them about her nerd status, listening to podcasts or watching Marvel movies and finds ways to incorporate elements of them into her teaching.

She praised her students’ adaptability and work ethic, and has been impressed with the initiative of those who have remained in virtual learning. She hopes her students don’t have the experience she had when she was their age, and hopes her more lively classes and lessons resonate with them.

“Education is one of the foundations of social change,” German said. “I want to help make the world better and as cliché as it is, the children are our future, and building learners who are enfranchised in a system that typically disenfranchises some populations is incredibly important. So I try very hard to make sure that my students are given all of the tools necessary to succeed and that they see reflections of themselves and success.”