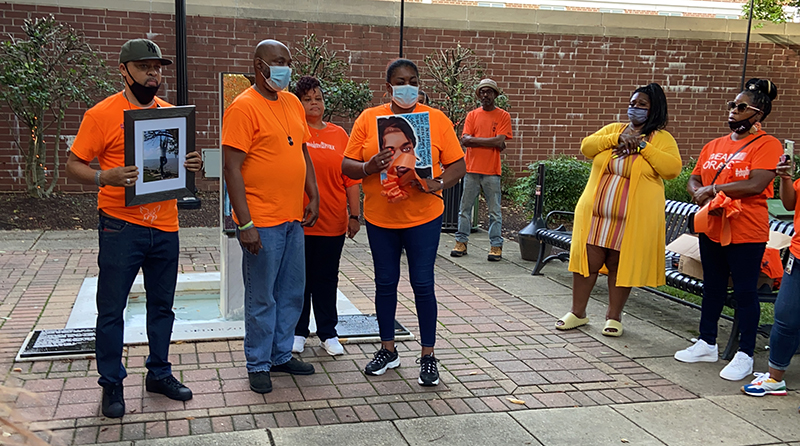 Families came forward one by one to say the names of loved ones they have lost due to senseless gun violence in the city.

A group of more than 50 individuals gathered in support of each other and stopping violence in Suffolk.

The Suffolk Advocacy Group hosted a gathering on the evening of June 4, Gun Violence Awareness Day, in the shaded courtyard beside the Godwin Courts Building. A sea of community members and grieving loved ones wearing orange met to remember those lost.

The group was started by Joan Turner, whose son, Quantez Russell, disappeared after being reportedly shot in 2015. Turner created this group with A.J. Parker, who lost his son Deshawn to a shooting in Suffolk in 2006, to be a sounding board for others who have also lost loved ones to violence.

“It’s a blessing to know you care about your loved ones you’ve lost due to violence,” said Bennett. “I do have you all in my prayers.”

Moor also supported those grieving a loss he, like Bennett, had never personally felt.

“I’ve been blessed,” said Moor. “I have never lost a close relative to violence of any nature. But when I look at what you all are going through — and I have known Joan for a while — it’s an opportunity to bring the community together, even though it’s in situations you don’t hope for. But I look around, and I see different parts of our community coming together.”

This came after a heated City Council meeting the Wednesday before as the issue of gun control surfaced due to Duman’s recognition of the day. As did many of the other speakers, he made it clear that this gathering had nothing to do with that. This was to recognize those lost violence — mostly to gun violence but also to other types of violence.

“I’m here for one reason and one reason only,” said Duman. “That’s to support the citizens of this city.”

Duman pointed out that gun violence is one of many forms of violence that plague the city. He also stated that he recognized that guns are a constitutional right protected in the Second Amendment and that guns were not the only reason everyone was gathered.

Duman reminded the crowd that he was not elected to ignore the concerns of the citizens of Suffolk. Regardless of the political climate, he said would do what was best for the city. He read the proclamation he made for the previous City Council meeting, saying that problems are not fixed from the outside in but inside out.

“Bottom line is, how do we reduce violence in all of its forms?” Duman said.

To recognize those lost, Turner called out numbers starting at one. Each family or representative for the family would come forward and speak the name of the loved one from Suffolk lost to violence. Families came up wearing personalized T-shirts and holding pictures, putting a face to the names they called out.

“So, right now, we can think of at least 34 names,” said Turner. “That is 34 too many. That is too many for senseless gun violence. And I am just hoping that with our group, we can continue to help each other, to be there for one another, to love on one another, and to always answer that call in the middle of the night.”

The gathering ended as families placed orange ribbons on the trees in the courtyard. Orange represents the gun violence prevention movement since its start in 2013 after the murder of Hadiya Pendleton. Orange is a bright color that makes people notice and remember, following the theme of the evening.

“We need to make sure that we put it out there that these are real lives and it’s real consequences,” said Chandler.