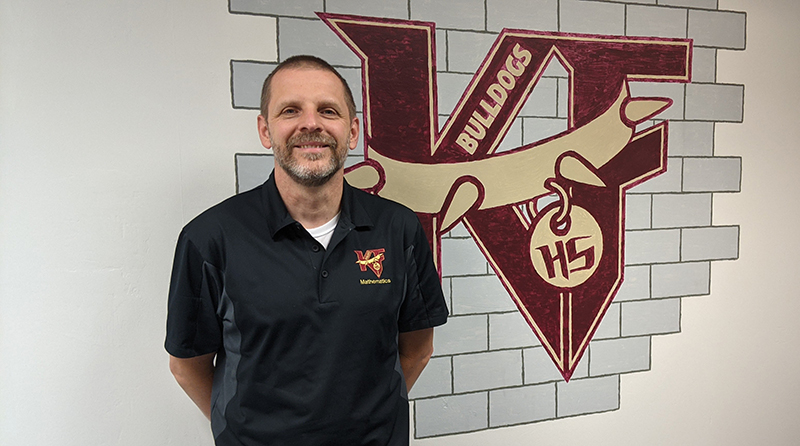 Though Scott Graham was used to teaching virtually even before the coronavirus pandemic closed schools last year, it didn’t make it easier to gauge how his students were learning.

Even when students were allowed to return to school, the King’s Fork High School math and physics teacher never had more than six to a class, meaning his classes essentially remained virtual, and it was still a challenge to teach.

“Our students, a lot of them, even after they came back, realized that it was no different other than they were sitting in a classroom,” Graham said, “and several of our parents and our students have pulled back out and said, ‘If that’s all it’s going to be, we might as well be doing it from home.’ Hopefully in September we’ll kick it back into something normal.”

Graham, who was named Suffolk Public Schools’ City-Wide Teacher of the Year, said a key to working with students over the past year has been showing grace and understanding. He noted the subjectiveness of receiving the honor.

“I’ve been in the same type of position back in the military,” Graham said. “There’s just no good way to truly figure out something like that, and honestly, at times, it’s almost counterproductive. I understand they want to recognize teachers, but this is such a team sport. Trying to say that anyone can do it alone is ludicrous. You obviously can’t do this job by yourself. Trying to identify one person out of 1,200, or even one person out of 12 in my department, it’s kind of crazy.”

He has taken advantage of technology to help him, as he was already familiar with the Canvas platform the division implemented as a dual-enrollment teacher with Paul D. Camp Community College, where in addition to King’s Fork students, has also taught students from Nansemond River and Lakeland high schools.

As an adjunct professor at American Military University, Graham had been teaching online for about 11 years, so having been exposed to the technology, he didn’t have to fight it.

“For me, to do that pivot, the real pivot was less about me learning the technology and more about adjusting my classes,” Graham said, “adapting my assignments and preparing my students for the online environment.”

He said it also helped to have assets such as Virtual Virginia and the WHRO consortium.

But not seeing his students did him no favors.

With students’ screens only allowed to be on during one-on-one tutoring, it was difficult to tell if students understood what Graham wanted them to learn. This year, he has been teaching two sections of geometry, two sections of IB mathematics and two sections of dual-credit pre-calculus with Paul D. Camp Community College.

“It’s doing the best they can, the best we can,” Graham said. “But there’s still not that interaction. There’s something about looking in the face and seeing if the kid understands, or an adult for that matter, whether you’re teaching a 15-year-old, an 18-year-old or a 40-year-old. Before they raise their hand, you can make adjustments, and we just can’t make those adjustments here.”

He said he and other teachers, especially earlier in the school year, were “extremely lenient” on due dates, in trying to show grace and understanding about learning in a COVID-19 environment while figuring out how to engage students who had different home situations, responsibilities or other challenges.

Students, he said, will need to adjust on a social and emotional basis once they are back in the classroom regularly, and adjust to a school environment in which turning in assignments on time is important and deadlines mean something. He said he is also concerned about a possible increase in dropout rates, an increase in class sizes at the middle school level and the potential for a bottleneck of students who didn’t graduate as the middle school students flow into high school.

“We now have spent 15 months in an environment where students didn’t have to figure out how to get along with each other, and with us,” Graham said. “They didn’t necessarily have to get up at 7 o’clock in the morning so they can be at school by 8:15. They didn’t have to necessarily  turn assignments in on time, but they had a little bit more … grace.”

Graham, though he is finishing his 11th year of teaching at King’s Fork, did not start out in education.

He had been an Army officer and was stationed at White Sands Missile Range Army Base in Otero, N.M., doing computer programming when his boss had a friend who, at the time, was serving as an acting department chair at the Air Force Academy in Colorado and was looking for a sister-service professor to teach math there.

There, he taught a variety of math and engineering courses as an assistant professor for four years. And, four years from retirement, he began to look into teaching as a future career, but did not want to get a doctoral degree and end up doing more research when he preferred to teach.

Graham used his military tuition assistance to get his teaching certification and then moved to the King’s Fork area, where he still lives about 10 minutes from the school. He had children who attended the school and has taught his neighbors’ children also.

In the fall, he expects students to have to re-adjust to in-person classes similar to how they needed to adjust to learning virtually, though students will still have an online learning option, and he said that having that is viable for certain sets of students.

He said some, especially those who may have had anxiety issues, ADHD or those who have been bullied, have done better this year than they ever have before. Others, he said, never made the adjustment to online learning and thrive in a school atmosphere that is more social and provides extracurricular opportunities.

“Have they adjusted? Sure,” Graham said. “Is it as good as it was in person? No. Probably most of our students have lost some of their education over the year compared to what they would have had if we had not shut down. So yes, it’s gotten better. I don’t think we’re there. I don’t think we’ll ever get there.”

Academically, he expects it to take time to recover what students have lost, depending on the class. He noted the school division’s efforts with its summer offerings and in its planning for the next school year and beyond.

“The courses that build, and it’s not just math — foreign language — if you didn’t get as good a solid base in Spanish I, it’s going to be very difficult to go to Spanish II without the teacher going back and cycling through,” Graham said. “For the student who doesn’t really get out of Algebra I, it’s going to be hard to go to Algebra II. Nothing against our history friends, but if you missed World War I, you can probably study World War II OK. … But generally speaking, our sequential courses, our music, when you’re talking about someone who’s trying to get a scholarship to be in the band at Norfolk State and they take an entire year of band off, just practicing at home, that doesn’t help much with their experience in marching on the field with their peers and working as a group.

“Unfortunately, I think we’re going to see as a nation, if not the world, two to three years before we get caught up.”

In his own classes, he expects to adjust accordingly — in some cases having to review certain concepts at the beginning of the year, and others he will be able to add-in as the class progresses. If you can’t solve a multi-step equation, he said, quadratics are not going to make sense.

“I don’t think the kids are going to enjoy it much,” Graham said, “because it’s going to be more work than they’re used to.”