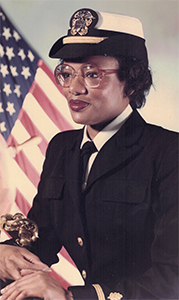 Pam, as she will be fondly remembered, was a registered nurse for 40 years. Beginning in 1989, Pam was in the nurse’s corps of the U.S. Navy as an officer, lieutenant commander. Before her enlistment, she worked at Truman Medical Center and Baptist Memorial Medical Center, both in Kansas City, Mo.

Following her service in the U.S. Navy, Pam was the sole owner of a home health care agency in Suffolk.

A native of Kansas City, Mo., she was preceded in death by her mother, Gussie Mae (Dean) Smith in 2001 and her father, Stanley Benjamin Smith in 1985. Pam leaves her only survivors: her sister, Dr. Sheila Brooks (Rodney) and nephew, Andre Brooks (Rick) and a host of cousins and other relatives.

Pam served tours in war zones on the front lines, serving our country, caring for the sick and dying. She began her U.S. Navy career in Alameda, Calif., where she served from 1989 to 1995. During her stint there, she was deployed to Desert Storm, the Gulf War, on the USNS Mercy. Pam was aboard the USS Comfort Hospital Ship that brought the U.S. hostages home from Iraq in the War in Afghanistan. She was also stationed in Guam, Camp Pendleton, California and Africa.

In 1999, she was inducted in Sigma Theta Tau International, the international honor society of nursing.

A military celebration of Pam’s life and burial will be held in the future.