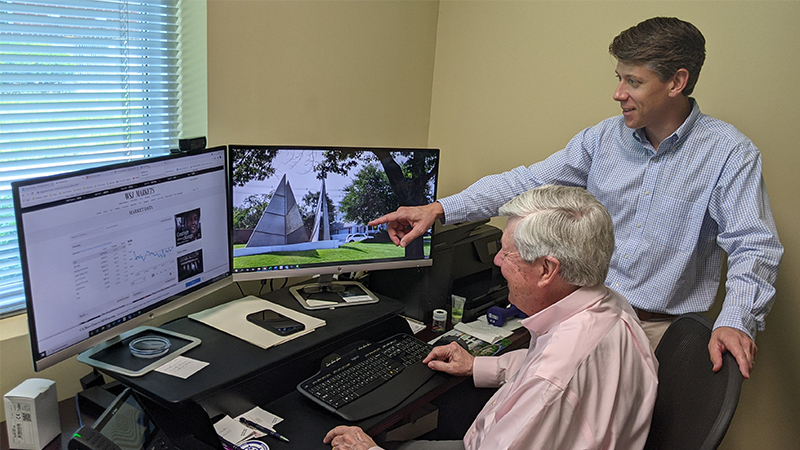 Arie Korving had to convince his son Stephen to work with him, but once he did, the two have made a formidable team — first working together for a larger firm, then striking out on their own more than 10 years ago to form Korving & Co., a financial planning and investment management firm.

Though small, the duo, along with operations manager Ella Bourne, form the entire Korving team, but it’s been more than enough to serve their clients and earn the Hampton Roads Chamber’s small business of the year for Suffolk.

“None of it would be possible without the support and friendship of our clients, the people that we work for,” Stephen Korving said.

The firm, based just off of Bridge Road in North Suffolk, began in 2010 when the two left the global investment firm UBS Wealth Management to work independently. That process was about two years in the making, and in that time, they were fielding recruiting calls to join other firms.

All of them had their own issues, and that’s when they chose to have a go on their own. They describe it as a leap of faith, but in their clients’ best interests.
“The independent model really spoke to us,” Stephen Korving said, “because it was the best model for our clients. We own the company; we don’t work for another company, and we get to choose the custodians of our clients’ assets as opposed to being directed that we can only work with one, or be beholden to one. We determine how to charge and what to charge, and we can be really thoughtful about that. We can come out the same financially, but in the process of doing so, save our clients a lot of money.”

They say the city has treated them well throughout.

“Talking to friends who have businesses in other cities, they don’t always know the people in economic development, or people throughout the city as well,” Stephen Korving said, “and it’s nice to know that they’re accessible, that we know who they are, that they know who we are and that they’re there to support us.”

It wasn’t how they ended up in Suffolk, but it has been a nice perk.

“In talking to other business owners, I’m really thankful that we’re in Suffolk,” Stephen Korving said, “and the growth in the area has been a nice perk as well. It’s good to have that continuity and to know people and know that if we need something, we have names. We’ve met the people before.”

They didn’t know their clients would come with them, but 99% of them did — all but three. And of those three, two returned to the Korvings later. They believe it’s because they keep their clients at the forefront of what they do.

The easy choice would have been to continue what they were doing with their old firm.

“It was a leap of faith that our relationships were strong enough,” Stephen Korving said.

As registered investment advisors, the two are fiduciaries, and they manage people’s money on a discretionary basis. They are different from other such businesses in that they are not brokers — people come to them to manage their money rather than have them sell products.

“We don’t call clients “to suggest buying this or selling that,” Arie Korving said. “They hire us to manage their money and make those decisions for them, and to watch over their finances so that they can focus on the things that they want to focus on — their lifestyle, their children, whatever interests them, their career.”

Arie Korving wrote a book, “Before I Go,” and paired it with a companion workbook not long after going independent to help people sort their financial affairs before they die and not leave any issues behind for the surviving partner or other family members having to sort through them.

With many of their clients retired, Arie Korving said they want to be assured that they are not going to run out of money before they run out of time.

They also think of their clients as extended family.

“We think of our clients and provide for them and manage their money in the same way as we would manage our parents’ money, or our children’s money or our siblings’ money,” Arie Korving said. “We would not recommend or do anything for our clients that we would not do with the money that’s entrusted to us by our families.”

While they don’t prepare taxes, they discuss tax implications and try to make sure their clients are managing their affairs as tax-efficiently as possible. As certified financial planners, they look at investments and their tax implications, estate planning and look at their complete financial situation to better recommend a style of investing and managing money.

They looked at the coronavirus pandemic as a short-term medical event, rather than a long-term economic one. “We did our best to make sure that we’re remaining visible,” Stephen Korving said, “and that they know that we’re here.”

They stayed in touch with clients through Zoom or on the phone, but others still wanted to meet in person. They also saw an increase in inquiries — “for a lot of people it was a wake-up call,” Stephen Korving said.

They have also helped take the emotion out of the financial planning process and help people not to make bad financial decisions based on emotional reactions to what was happening.

“We were able to hold their hands,” Arie Korving said, “and not only allow them to maintain their financial stability (but) then benefit from the subsequent rebound in the market that occurred.”