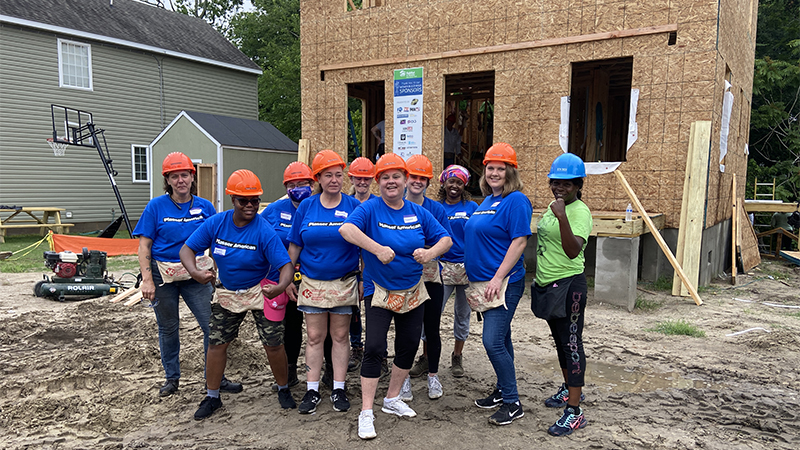 Women in Hampton Roads had a chance to come to Suffolk to be a part of a greater project.

Many of the volunteers were from Plasser American Corporation, an industrial equipment supplier and partner with Habitat for Humanity South Hampton Roads. Many of the women who came were office workers who typically spend their days behind a desk, but they had a chance to try something new this week.

“One thing I appreciate is that we are all about community,” said Danielle White, project coordinator at Plasser American. “This build is so important to show women giving back, and Plasser really embraces women in this field.”

The mission of Habitat for Humanity is to pay it forward. This new home was on a vacant piece of land that no one kept up. Now, the lot will have a new home with a new owner bringing more tax money to the city and a better looking plot to the neighborhood.

“This is about the community coming together,” said Frank Hruska, executive director of Habitat for Humanity South Hampton Roads. “It gives a single mom a new home and the neighborhood and community as a whole an improvement.”

Donica Miller is the owner of this new home. Miller is moving from Virginia Beach with her two teenage daughters and is excited to be a part of this.

Homeowners with Habitat for Humanity have specific requirements to get this home. Not only do they have to demonstrate good credit and the ability to pay the mortgage, but they also must put in 200 hours of sweat equity into their and other Habitat for Humanity homes. This is part of Habitat for Humanity’s philosophy of giving a hand up rather than a handout. Homeowners also have to receive financial education to ensure their success in handling their new mortgage.

“I want to thank everyone who put my home together,” said Miller. “It is very much appreciated, and I hope that the volunteers understand the impact they have on families.”