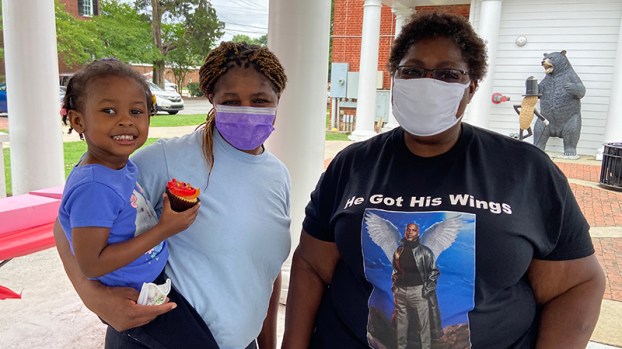 Ra’zsai Washington, Karen Gibson and Teresa King enjoy cupcakes and games after their team All in the Family finished the Amazing Peanut Chase. 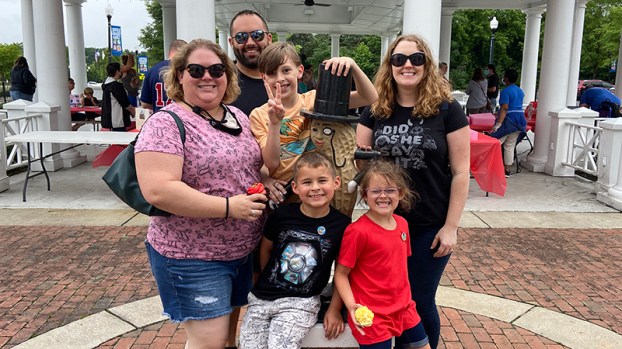 The first team to finish the Amazing Peanut Chase was the team, Suffolk Avengers. Making up the team were Kerri and Jesse Epperson, Corbin and Allison Greene, and, in front of Mr. Peanut, Jace and Jemma Epperson. 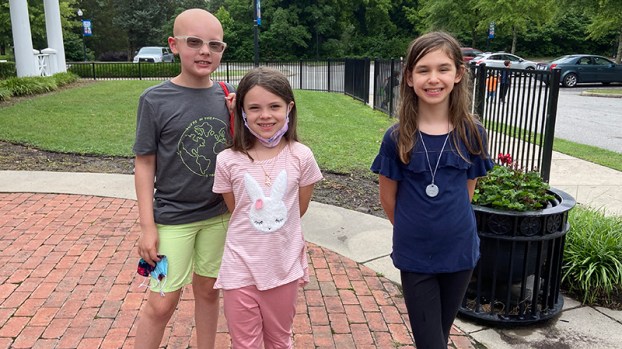 Winning first place in the Amazing Chase raffle was team The Three Amigos who chose the “All Things Sweet” bag with a 350-piece baking set and a $30 gift card to Pink Box. Making up the team were Bryce and Arabella Noell and Isabella Moses.

A nutty scavenger hunt was back to take Suffolk residents all over the city they call home and learn more about local Black history.

The Suffolk Public Library held its annual Amazing Peanut Chase on June 12. This chase gave 30 teams clues to find 10 locations around Suffolk. Each site had a box with a ticket for each team to bring back to enter in a raffle.

The theme this year was Juneteenth. With the holiday a week away, the chase kicked off a week full of ways to celebrate with Suffolk Public Library.

“We wanted to start the week off highlighting important locations of African American history,” said Aidyn Scott, lead of the Amazing Peanut Chase at the Suffolk Public Library. “This is nowhere near an extensive list, but this is a great chance to celebrate Suffolk.”

After an afternoon of road tripping around Suffolk, participants met at the Suffolk Visitor Center to celebrate their hard work. Folks could play Giant Jenga and corn hole, fill out a crossword puzzle or get a cupcake provided by Pink Box, a bakery located off Harbour View Boulevard. Pink Box also came with extra treats to sell for those who worked up an appetite.

Team Ross is relatively new to Suffolk and enjoyed this opportunity to learn more about the city.

“We didn’t know some of the places since we have only lived here for five and a half years,” said Brittany Ross. “We definitely learned more about the community.”

Despite the struggles, the family of five still enjoyed the event and are making plans for next time.

“We definitely enjoyed it,” said Lance Ross. “It was something different to get out and do. We’re going to get an earlier start next time, though.”

Team Ross wasn’t the only team looking forward to next year’s. Team All in the Family is ready for another round of clue-solving next time.

“There was only one we couldn’t figure out,” said Teresa King. “It was fun, though once you did figure out the clues. This was our first year doing this, and we will do it again.”

While some of the clues proved hard to figure out, chasers could call the chase hotline for more hints. For some, figuring it out was the best part.

“My favorite part was looking for the last park,” said Arabella Noell, age 7 and part of The Three Amigos.

Her brother Bryce Noell, 10, agreed that his favorite part was running around the wrong lake looking for the box of tickets.

Many participants had trouble finding Tynes Park, the center of the Fairgrounds neighborhood that thrived with Black-owned businesses in the 1940s through the ’60s.

Everyone didn’t have to finish before coming to the end party. The only prizes were the raffles won from the tickets collected, increasing the chance of winning with more sites visited. However, The Suffolk Avengers made it their goal to be the first ones back only for the satisfaction.

“We were on a mission to be the first ones done,” said Kerri Epperson.

“We knew there wasn’t a prize, but we just wanted the satisfaction,” added Allison Greene.

The families have lived in Suffolk for years but found places during the chase they had never heard about while living here.

“Suffolk is so big, so it’s good to see different parts of it you may not know exist,” said Greene.

Once the teams made it back and turned in their tickets, Scott used a digital prize wheel to choose the raffle winners. The first-place raffle went to The Three Amigos, who picked the “All Things Sweet” bag that contained a 350-piece baking set and gift certificate to Pink Box. In second place was Diana Greg, who chose the “Coffee & Cocoa” bag filled with coffee cups, coffee from Pour Favor, hot cocoa bombs from Pink Box and a gift certificate to Wall Street Cafe. Third place went to team Riendeau, who received the “Family Game Night” bag with a game, sandwich cookies, popcorn and a gift certificate to Will O’ Wisp. Pink Box donated extra gift certificates for free cupcakes that were also raffled and won by teams The Florens Family, I Don’t Know and Betty and Wilma.

“Some got all 10 places, but others only got a few,” said Scott. But everyone seemed to have fun.”