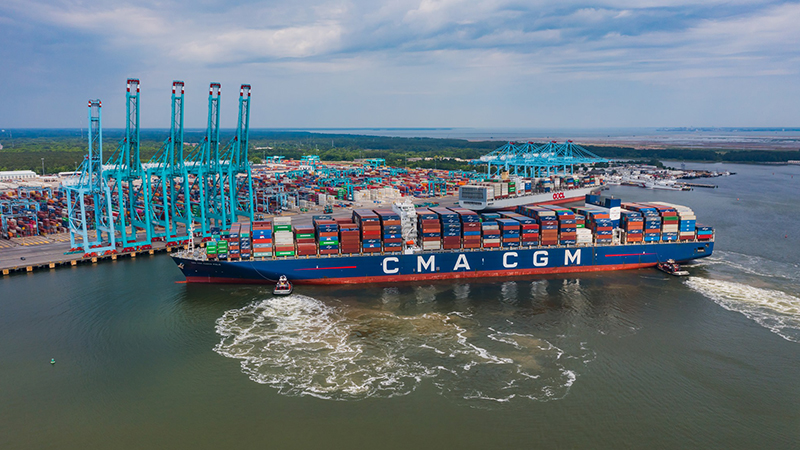 The largest container ship ever to come to the port and to the East Coast, the nearly-1,300-foot CMA CGM Marco Polo, helped drive the record volumes at the Port of Virginia, arriving at the Virginia International Gateway terminal in late May. (Port of Virginia photo)

The Port of Virginia set a new monthly milestone, handling nearly 315,000 containers in May, beating its record by nearly 30,000 containers.

The largest container ship ever to come to the port and to the East Coast, the nearly-1,300-foot CMA CGM Marco Polo, helped drive the record volumes, arriving at the Virginia International Gateway terminal in late May.

“The biggest vessel to ever call The Port of Virginia, multiple ultra-large container vessels on berth and working simultaneously and record volume in May: these are important milestones because they clearly demonstrate the capabilities of this port and the teaming running it,” said Stephen A. Edwards, chief executive officer and executive director of the Virginia Port Authority, in a statement.

The CMA CGM Theodore Roosevelt, which had previously been the largest ship to call on the port, also came through last month.

“What is most important is to look at how we processed this volume at the berth, truck gates and rail ramps,” Edwards said. “Our overall performance metrics reflect an operation that is performing well for customers and the cargo owners. We’re processing month-on-month record volumes with a very high level of efficiency.”

In the past week, the port announced it would be extending its Saturday gate program at Virginia International Gateway through the end of the month.

Also, the port is expecting to receive 735 new chassis for Hampton Roads Chassis Pool II by the end of July. That fleet renewal process is 80% finished, with the average age of chassis in the pool five years old.

“The strong volumes are continuing into June and from there we will see peak season begin,” Edwards said, “so we are not expecting a significant slow-down in the near term. We’re going to keep adding assets and, if necessary, hours to the operation, to ensure cargo flow and accommodate the cargo owners.”