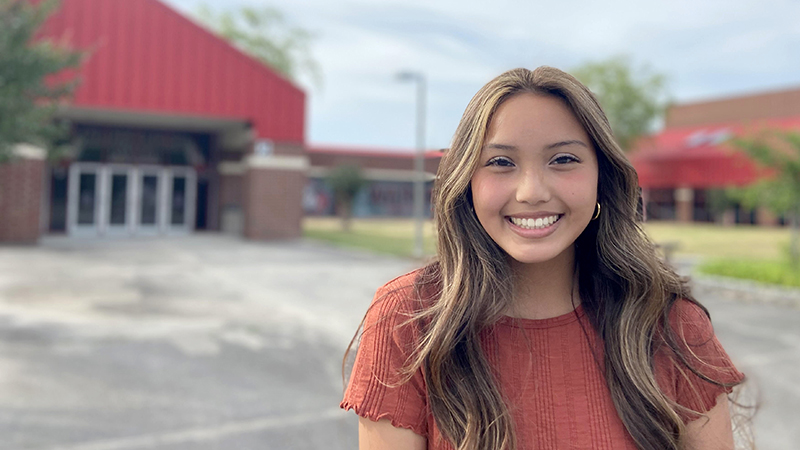 Alyssa Cadua was named valedictorian for the class of 2021 at Nansemond River High School.

Earning a 4.55-grade point average in the school’s Project Lead the Way engineering program, Cadua did plenty over her four years of high school to boast about.

“This sounds silly, but being able to give my parents something to brag about and post it on Facebook is just a good feeling to know that they have that,” Cadua said.

But despite her giving them that, they never pressured her to achieve that status.

“I think what makes it more special is that my parents didn’t pressure me at all,” Cadua said, “because they see me stressing and they’re like, ‘Alyssa, you know it’s OK if things don’t turn out the way you’re hoping they do.’ But that makes you almost want it more that they don’t pressure me.”

Her parents, Edwin and Susie, have been her biggest cheerleaders and did the little things that allowed Cadua to get a few extra minutes of rest.

For instance, because Cadua had to work throughout high school, her mom would have dinner ready for her when she would come home from a late shift so she could get to bed a little earlier, or focus on any homework. Her mom also helped with other things around the house so Cadua wouldn’t have to worry about it.

“I noticed that she would try to help me in any way possible. So I really, really appreciated that.”

Cadua described the last 15 months, and certainly all of her senior year, as weird. She wasn’t sure if she could do all of her classes on the computer.

“I was freaking out,” Cadua said. “I did not think I could keep this up for the whole year. I was definitely planning on going hybrid. But then after a month or so, I adjusted to it. I adjusted, my friends adjusted and we leaned on each other.”

She had trouble keeping up with due dates, but her friends in the engineering program at Nansemond River helped her. Ultimately, she chose to stay in virtual learning to avoid having to adapt again.

“I didn’t want to have to go through another adjustment period,” Cadua said, “especially since it was so late in the year, I had already settled in.”

Her friends also helped Cadua keep up her confidence and were patient with her, especially during times when she hadn’t done as well as she would have liked.

As for other events or things she would have been able to do in a more normal, non-coronavirus pandemic senior year, she has little regrets.

“I’m not sad,” Cadua said. “I don’t feel like I’ve missed out on anything. When I’m going through pictures and I see a picture of me at a football game, in the River Rowdies crowd, it’s kind of like an ‘Aww, I’ll never have that again,’ kind of a feeling.

Cadua at one time wanted to be an aerospace engineer, but after drifting away to that, became more interested in biomedical engineering. She’s focusing more on the technology side of the medical field and hopes to work in a hospital alongside doctors trying to develop artificial organs.

She’s been inspired by her older sister, Danielle, who was born with a hole in her heart.

“She’s totally fine, but I’ve always thought it was interesting, so that pushed me toward it.”

With her sister going into the medical field, and her mom, Susie, already there, they’ve always talked about it.

“I remember, even though I was really young, I had memories of waiting for her in the hospital,” Cadua said. “And I think it’d be really cool to help people who were like my sister.”

She is, however, open to other kinds of engineering.

“I definitely think, for sure, I’m going to stay in engineering,” Cadua said. “I just want to build things.”

Besides school, Cadua played a lot of field hockey, especially for her club team, but when that ended, she got into baking. When her church, Community Church, reopened, she began attending there a lot more. She said it was a good outlet to take a break from school and work, and “just breathe out a little bit and see a bigger picture.”

“I relied on that,” Cadua said. “It was a nice community in a time where there wasn’t any other kind of gathering, other than church.”

Her valedictorian speech focused on living in the moment. Its genesis came from her church group in which discussion centered on how people always have some goals they run toward, and then when they reach that goal, they move onto the next goal without celebrating the achievement.

“We’re never just celebrating what we used to be running towards,” Cadua said. “I wrote about that because that’s how I felt about getting valedictorian. I found out I was valedictorian a few months ago and then I was like, ‘Cool, that’s awesome.’ And then I started freaking out over scholarships, and trying to get scholarships, and then once I found out I got a scholarship, I started freaking out about getting furniture. It’s always something, instead of just enjoying it.”

Looking back at high school, Cadua said she would tell herself that no matter what, things will be OK.

“The freshman me was stressed so much over every little detail,” Cadua said. “And in the end, that one test that you didn’t do so well on, that one game that you played so bad in, it’s OK. In the grand scheme of things, it’s OK.”