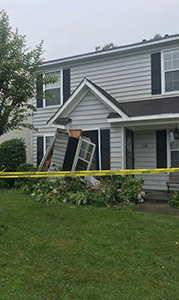 A family was displaced from their home when it was struck by a vehicle on Tuesday afternoon. (City of Suffolk photo)

A family was displaced from their home when it was struck by a vehicle on Tuesday afternoon.

The Suffolk Police Department and Suffolk Fire & Rescue responded to the incident in the 100 block of Stoney Ridge Avenue, according to a city press release. It was reported at 3:53 p.m.

Preliminary investigation found the passenger vehicle was traveling on Stoney Ridge Avenue when it left the roadway and struck the front entrance of the two-story residence, the press release stated. There were no injuries to the driver or the occupants of the residence, who were home at the time the accident occurred.

Neighborhood Development Services staff also responded to the scene. Two adults and one child have been displaced as a result of the accident and will be assisted by friends.

The adult male driver is in custody and charges will be forthcoming.