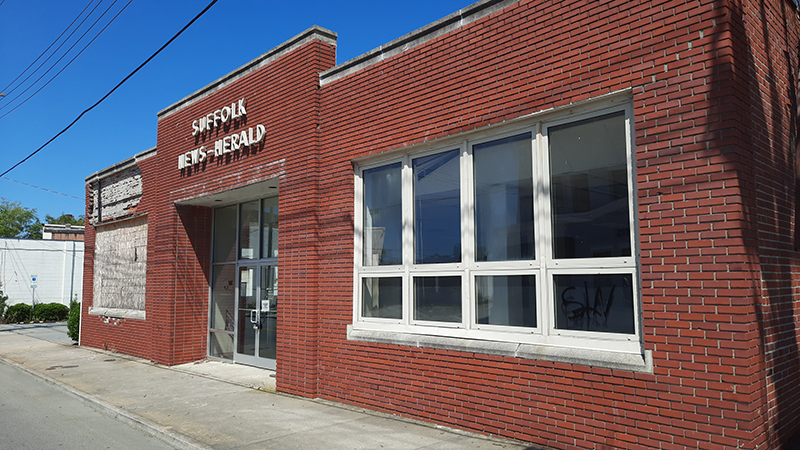 The Suffolk News-Herald’s office at 130 S. Saratoga St. has served for years as a beacon for its staff to chronicle the city’s many historical moments.

But the newspaper’s time at that address is now history, too, as it has been sold to Monument Development Sixteen, LLC and will be developed into 14 apartments as part of an adaptive reuse project for the three-story building along with 434 feet of ground-floor commercial space and 434 feet for a lobby. City Council unanimously approved a conditional use permit last month.

David Dallman, an engineer with Kimley-Horn representing the applicant Chris Johnson and Monument Development Sixteen, LLC, said there would be a lobby and commercial use on the first floor.

“We are excited to take a historical building in downtown Suffolk and bring new life to the building with a new apartment building,” Dallman said.

Because the proposal was not able to accommodate the required open space standards, it needed, and received, a variance from the Board of Zoning Appeals. The requirement for off-street parking will be met with the public lot next to the building.

According to the project narrative from Kimley-Horn, no exterior improvements have been proposed, for now.

The Planning Commission unanimously recommended the conditional use permit. Commissioner Anita Hicks, following an April public hearing, expressed concern about whether there would be enough parking for the proposed apartments. However, Interim Director of Planning and Community Development Robert Goumas said the adaptive reuse project in the central business district would share spaces, and added that there is “an available abundance” of parking.

“I would contend that it would be a good thing for downtown to almost have a parking problem if we had that much activity and business and we could move forward,” Goumas said. “That would be one measure of success.”

An EF1 tornado spawned by Tropical Storm Isaias damaged the News-Herald building last August, with its staff moving into the former Virginian-Pilot building on North Main Street and continuing to work from there.

“It was a sad day when we closed the doors at 130 S. Saratoga St. for the final time,” said News-Herald publisher Betty Ramsey in a statement. “The list of those who called the Suffolk News-Herald and that building their home away from home over the years is long.

“I’m proud to say that in Suffolk News-Herald fashion, this team didn’t miss a beat when the building was destroyed. They dug in, pulled together and got your community newspaper out on time. Our offices have changed, but as always, you can count on the Suffolk News-Herald team to deliver the news that is important to you.”