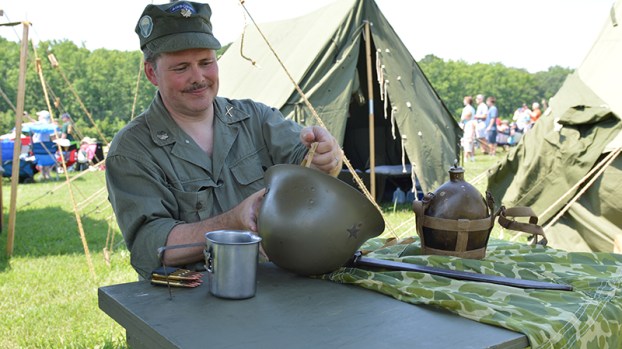 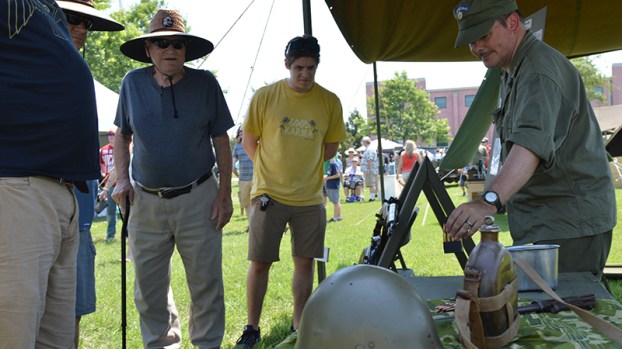 Suffolk-based attorney, Kevin Frank with Randall Page, P.C. spends his days advocating for a favorable outcome for his clients. His battleground, like many attorneys, is the multiple courts throughout the Hampton Roads region.

This author had the opportunity to catch up to him on a different battleground last weekend at the Military Aviation Museum in Virginia Beach; where he, along with countless World War II reenactors, served on the front lines of history.

I had previously arranged to meet him during the museum’s Virginia Warbird Weekend. The airshow attracted thousands of visitors who descended on the grassy airfield and associated hangars to experience World War II history. Finding him amid the crush of visitors on the ground, and amongst the various World War II encampments, proved to be a unique challenge. I started to ask the different re-enactors dressed as British, Australian, and U.S. Navy Seabees where I might be able to locate his encampment. I eventually found him under his tent speaking to a crush of curious visitors as he pointed out the details of an M1 Garand and a steel helmet.

It was clear that he traded in courtroom attire in favor of the green U.S. Army uniform that soldiers donned during combat operations in the Pacific. He pointed out that his reenacting theme during this event was the U.S. Army’s 11th Airborne Division during operations in the Philippines. Specifically, he noted that he was depicting the role of Lt. Col. Henry Muller, the division’s G-2 or intelligence officer who was responsible for planning the raid on the Los Banos prison camp in Luzon. That raid, hastily planned and executed by the division, resulted in the liberation of over 2,000 civilian prisoners and 12 U.S. Navy nurses in Japanese-held territory.

Frank noted, “a lot of research goes into this [re-enacting]. To study it, to learn it, to be able to portray it. Whether it’s the uniforms, the equipment, all of that comes into play.” As he said this, a restored U.S. Navy Grumman FM-2 Wildcat rumbled skyward behind us as crowds cheered; “that’s our close air support,” he said with a grin, and continued to point out some of his gear. Behind his tent was a World War II-era field kitchen, staffed by his father, who was serving lunch on steel mess kits. In front of him were various pieces of gear that soldiers carried into battle, from helmets, bayonets, weapons, and a plethora of kit that soldiers carried into battle.

Next to his open tent was another setup as a campsite, where he spent the night. There were other re-enacting groups present as well, portraying both Allied and Axis units on both fronts of the war. Those groups were replete with authentic weapons, pieces of equipment, and of course vehicles, the vast majority of which were personally owned.

He noted the camaraderie among the re-enactors. “We have a lot of different interests, but we are all pulling together to tell the story. To tell one big story, but tell it in fragments,” Frank said.

It was at this point that our interview stopped as a group of visitors stopped by. He walked over to a map taped to a plywood board, and he pointed out the actions of the 11th Airborne Division during their raid at the Los Banos prison camp in February 1945.

After fielding some questions, he noted the excitement and consensus of visitors who stopped by. “I do see a lot of appreciation for it from a lot of generations, we had a lot of people come by this weekend,” said Frank, as he stopped again to provide some meaningful interpretation amid the rumble of World War II aircraft flying overhead.

Frank has been doing this for nearly a decade. He said World War II re-enacting is “a passion for history, it’s a way to do it as a hobby. It can’t be my full time job, but I enjoy telling the story.”

That combined historical story brought together a myriad of groups to the museum in the Pungo section of Virginia Beach. Tucked into the museum’s Navy hangar were exhibit booths from the Hunter House Victorian Museum, Virginia Beach Surf and Rescue Museum, the Southeastern Virginia Rocketry Association, Patriot Riders, and the Old Dominion Honor Flight, among others. Also present were volunteers from the Hampton Roads Naval Museum, providing meaningful interpretation to the Navy’s role during the Vietnam War and of course during World War II. All of these groups converged amid the backdrop of historic World War II aircraft flying overhead and historical re-enactors on the ground at the Military Aviation Museum.