Valedictorian’s achievements due to ‘hard work and God’s grace’ 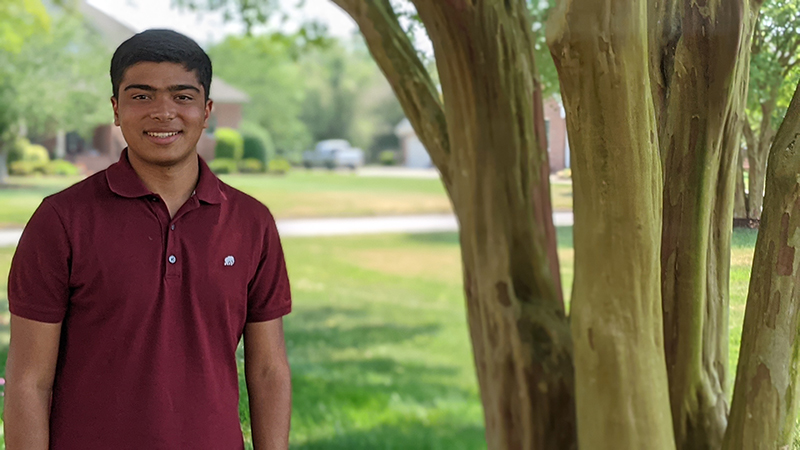 Arya Barot said “hard work and God’s grace” allowed him to achieve valedictorian status for the class of 2021 at Nansemond-Suffolk Academy.

Editor’s Note: This is the fourth in the Suffolk News-Herald’s annual series of stories on the valedictorians at Suffolk’s five high schools.

Arya Barot had always had the goal, and the dream, of becoming valedictorian, but it wasn’t something he expected, or something expected of him.

Taking a challenging academic course load at Nansemond-Suffolk Academy, Barot made that a reality and sustained his efforts even while attending classes virtually. And he attributes his achievement as valedictorian to two things.

“Hard work and God’s grace,” Barot said. “I can’t take credit for it. I’ve worked hard and my family has instilled values in me, but also, my belief that whatever success or achievements I get are all God’s grace.”

As for many, COVID-19 changed school and interactions with people. Barot said a positive effect is that it has allowed him to grow closer to his family, including grandparents who live in the same neighborhood.

“We’ve taken it very seriously, because I live in a multigenerational family,” Barot said. “I’m very close to my grandparents. In fact, we do family prayers together each evening.”

That’s why Barot said he and his family have taken every precaution, and it’s why he remained a virtual student even as many of his peers returned to school.

As for the online coursework, Barot, who had attended NSA since the third grade, said he didn’t have difficulty adapting to it, and with family around, he didn’t feel isolated.

“I’ve always worked hard and I’ve always done my best,” Barot said, “so during the pandemic, I had to adjust what I was doing, but I never had the feeling that it would come in the way of my goals.”

But throughout his time at NSA, Barot challenged himself, completing 11 Advanced Placement exams along with every honors or higher-level courses that he could take in each subject, especially in math and science. He said doing this taught him how to better manage his time.

Though he plans to major in computer science at the University of Virginia, he also has a budding interest in entrepreneurship and business.

Prior to the pandemic, Barot was a multi-sport athlete at NSA, having competed in cross country, swimming, indoor track and tennis. During the pandemic, since he wasn’t competing at school, he kept in shape by running with his brother.

For his valedictorian speech, he said he did not feel qualified to offer advice to anyone, but that he would highlight things important to him — empathy and gratitude. Those are attributes he said his parents raised him with.

“Everything that I do, and all of my hard work, I always try to maintain humility,” Barot said, “and I always try to remind myself to stay grateful to everyone who had a part in that, especially my family, parents and in school, my teachers, counselors, people who gave me guidance.”

He said his faith has always been an integral part of who he is and a big part of his life.

“In the past year, I’ve learned to be more grateful and I’ve learned to appreciate what I have more, and who I have more,” Barot said. “There are people who are worrying about making ends meet, and feeding their families and paying rent, and luckily, we’ve been very blessed.”

Looking back at his time at NSA, Barot said he’s enjoyed his experience, making close friendships and finding mentors to guide him.

“When I look back,” Barot said, “I will remember how much I grew from the time I entered NSA to now, my graduation.”