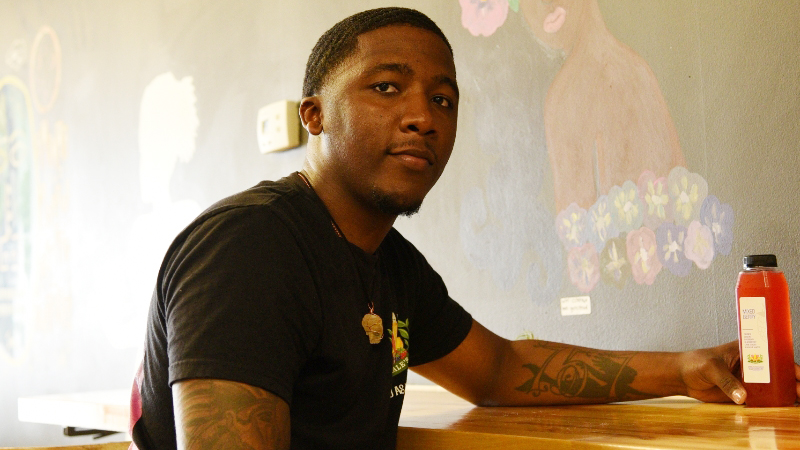 Carl Hale is a Suffolk native sharing his passion for ginger lemonade.

What started as a quest to recreate a missed drink turned into a business Carl Hale never expected.

Hale is a Suffolk native who graduated from King’s Fork High School in 2012 and joined the U.S. Navy.

As an avid fan of ginger, Hale tried a ginger lemonade while visiting Atlanta and fell in love. After returning to Virginia, Hale tried his best to recreate this drink.

With a lot of trial and error, Hale created a ginger lemonade he shared with his friends and family. His loved ones started telling him he should sell this new product. He never thought about owning his own business before, but with this much support, he decided to give it a try.

“It was just their belief in me that really made me go for it,” said Hale.

Hale bought some bottles off Amazon, made a label and filled them with his new drink. After that, the business took off.

As the ginger lemonade got more popular, Hale started to experiment with more flavors. He currently has the original, berry, strawberry kiwi, pineapple and matcha lemonade. For the summer, Hale plans to add mango and watermelon for the seasonal fruits. He used to just make the drinks in his mom’s kitchen, but now a distribution center makes his pre-made recipes, and he just experiments with new flavors at home.

“Once I got the right taste down, I stuck with it,” said Hale. “With the new flavors, it’s just trial and error until I get it just right.”

After some research, Hale realized ginger has many health benefits. He even sells a T-shirt with 10 health facts about ginger on it. Ginger can boost the immune system, ease menstrual pain and much more.

According to Hale, he was never into health until he started this business. Each drink is made from cold-pressed ingredients listed on the label. This has allowed him to sell at vegan and health food stores due to the simplicity of the ingredients.

He is currently selling at a few stores and restaurants, including Cltre Vegan Joint and Herbal Wellness in Virginia Beach and Conscious Planet and Major Phillie in Norfolk. GingerHale’s is also for sale on its website, along with other merchandise.

Hale still serves his country in the Navy. He re-enlisted to give himself time to find out what he wanted to do once he returned to civilian life. Now, Hale has one more year and then he will be able to dedicate himself to the GingerHale’s business fully.

“This has definitely set me up on the right path for once I return to civilian life,” said Hale.

He does not plan to have his own store but wants to get into as many stores as possible to sell his ginger lemonades. His goal is to expand into 30 stores in Hampton Roads this year.