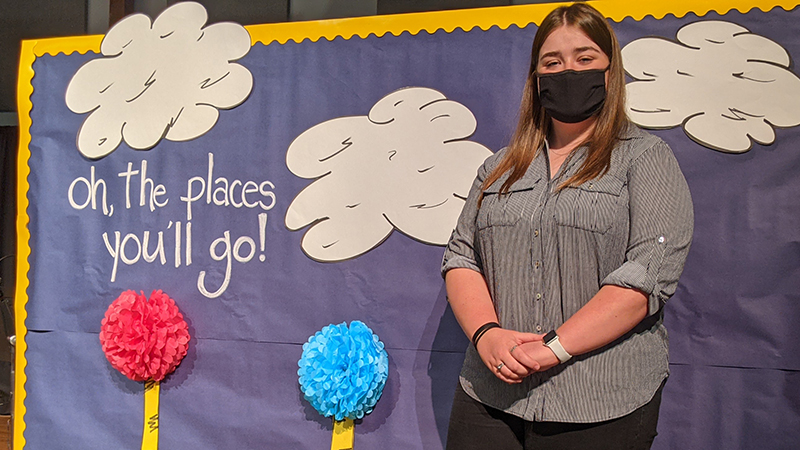 MaryDouglas Johnson wouldn’t trade her experience at Suffolk Christian Academy for anything, and credits the school’s staff, and her family, for helping her on her path not just with academics, but with life.

Johnson, who earned valedictorian status for SCA’s class of 2021, was able to balance her classes while playing basketball and growing in her faith.

During this past school year, she did not go back to school in person until late last fall for health reasons — “that was odd,” she said. She started by coming in for her government class to participate in discussions. After that, she phased herself into classes, and once she completed a quarantine period following Christmas break, she went back to school in person.

In particular, Johnson credits SCA Headmaster Tamra VanDorn, who she has known since a little girl, with mentoring her.

“She’s really been like a guide to me, getting me through, not only academically, but spiritually as well, helping me keep on track with both of those and keep them steady and even them out so I’m not focused on academics more, not focused on spiritual more. You have to have the right balance.”

Her family, too, helped her stay motivated to do her best.

“And then I weighed the pros and cons. Yeah, you have to give a speech, but you get that on your resume, you get that on your academic records. It’s an accomplishment, and I was like, I want to push for it. And my family really did help me with that, especially my mom.”

Her mom, April Johnson, pushed her to play sports and to do her best in school.

“She (kept) me motivated to get everything done on time, as well, because I’m one to procrastinate until the very last minute,” MaryDouglas Johnson said, “and either not finish it or not doing it to the best of my ability.”

With all she’s accomplished, she said if she could do it over again, she would do more in her free time earlier in high school because you may not have that later on.

Academically, Johnson took dual enrollment classes at Paul D. Camp Community College to help her get ahead when she goes to Virginia Tech to study engineering. While she will be thankful for some family help with financial aid, she is looking to work this summer and pair that with scholarships she has received.

The SCA valedictorian also noted the help she received from her basketball coach, Kristy Cornette.

“She’s really helped me a lot athletically, because at one point, I was really on the fence about playing basketball,” Johnson said, “even before COVID. I was like, there’s school, … it’s my junior year and there’s a lot going on. And she was like, ‘If it’s too much, quit, but I’d like for you to try.’ And my mom said the same thing.”

She tried, loved it and kept with it.

“It motivated me to have more time management,” Johnson said.

And that came in handy when putting together college applications, securing financial aid, looking for a job and also balancing her faith and family, and finding a little alone time on top of her academic load.

As a result, it fills her with gratitude for the support she’s received, doing it all in the midst of the coronavirus pandemic.

And without that support?