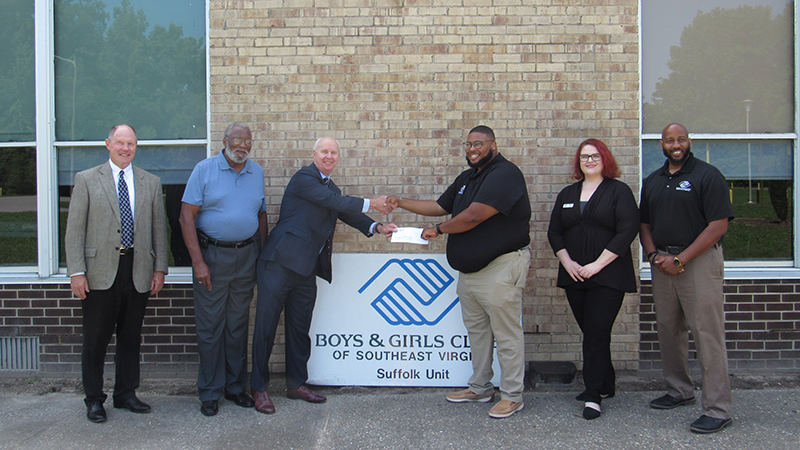 Farmer’s Bank on Godwin Boulevard presented a donation of $10,000 to the Suffolk Unit Boys and Girls Club.

Farmer’s Bank has supported the Boys and Girls Club as they participated in numerous fundraisers in past years. This year, in recognition of the significance and importance of Juneteenth, the bank wanted to make large donations to two organizations that make a significant impact in minority communities. One of the two was the Suffolk Unit Boys and Girls Club.

“It’s a great organization,” said Vernon Towler, president and chief executive officer of Farmer’s Bank. “We are really happy to make a contribution to focus on the youth that are an underserved minority in the community.”

Towler acknowledged that due to COVID-19, many charities and volunteer organizations are facing financial challenges. He hoped that this donation can help make a positive difference in the lives of Suffolk youth.

The Suffolk Unit Boys and Girls Club’s new director, Montreal Scott, grew up in the club. He was one of the first members of this unit when it started in Suffolk.

“Boys and Girls Club changed my life,” said Scott. “It came at a pivotal time when I was coming into middle school. They had just closed the Birdsong Recreation Center, so there was nowhere safe for us to have fun.”

The Boys and Girls Club focuses on enabling youth to reach their full potential to be productive, caring and law-abiding citizens. Using afterschool and summer programs the club can provide safe and positive environments. The money will go to game consoles, televisions, arcade games, pool tables, air hockey tables and other items to give the youth in Suffolk something to do.

“I want the community to know I’m excited about this opportunity and what I as a director can bring,” said Scott. “We have a great staff here to support what these kids need. We’re all about teamwork. We want to see kids be the best version of themselves as law-abiding citizens.”

The Suffolk Unit of the Boys and Girls Club meets at John F. Kennedy Middle School off East Washington Street. Scott hopes that soon the club will get its own building to serve the community better.