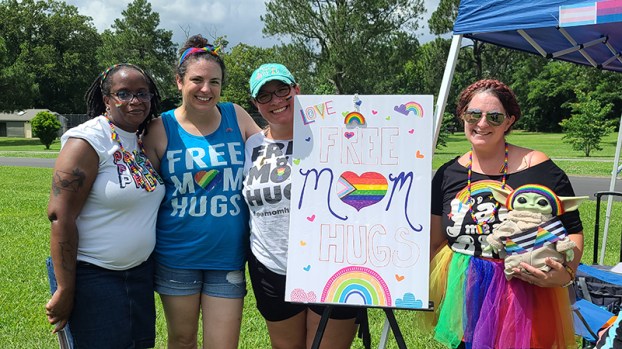 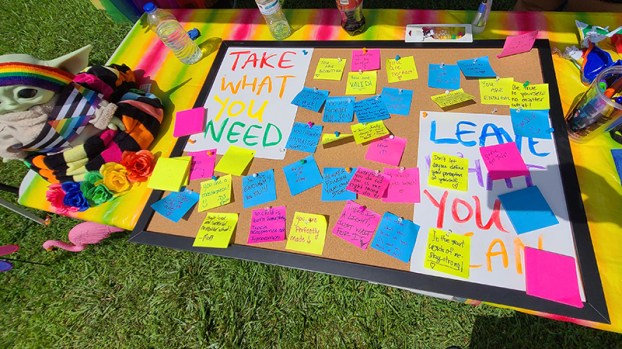 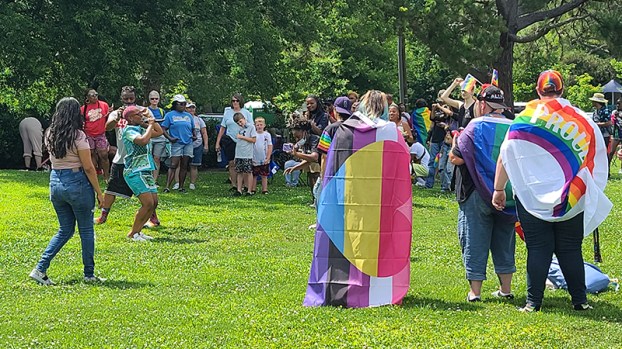 Visitors to the first-ever Suffolk Pride event on Sunday listen to a musical performer near the stage at Bennett’s Creek Park.

The first-ever Suffolk Pride event drew hundreds of people of all ages to Bennett’s Creek Park on Sunday.

The crowd drifted in and out between noon and 7 p.m. Some folks stayed the whole time and just rested on their blankets and lawn chairs and socialized. Some enjoyed the performances and greetings from elected officials. Some visited the vendors that were set up along the perimeter of the field. And a large contingent of children and teens had fun connecting with others their own age, many of them draped with flags that designated their sexual orientation or gender identity or one they wanted to support.

“We are extremely pleased about the turnout,” said Suffolk LGBT community outreach coordinator Mia Feliu. “We raised a lot of money for our future LGBT Center we want to open up.”

A car wash near the entrance and exit to the event, as well as donations by attendees, helped bring in the funds.

Organizations that were there in support of the LGBTQ community included the Hampton Roads chapter of FreeMomHugs.org. Several moms, dads and siblings were there to offer love, affirmation and validation — and, of course, hugs.

“You can always tell when people walk by if they want a hug,” said Julia Coup, the co-leader of the group. “I am a mom, and I can’t imagine not loving my children, regardless of their sexual orientation. If I can make someone’s day a little better with a hug, it seems like an easy thing to do.”

Fawn Faulks, who is on the board of Hampton Roads Pride, said it was refreshing to see the first-ever event in Suffolk.

“We’ve been trying to get something started in Suffolk,” Faulks said. “I think it’s important for each city and community to embrace Pride.”

The stage at Bennett’s Creek Park was filled all day with drag performers, musicians and greetings from politicians including Delegate Clinton Jenkins and Congressman A. Donald McEachin.

Jenkins highlighted the General Assembly’s efforts to remove anti-marriage amendments from the state constitution, increase treatment and testing services for those with HIV and AIDS, and lower health care costs for all citizens.

McEachin spoke about his efforts to pass H.R. 5, the Equality Act, which would federally ban discrimination on the basis of sexual orientation and/or gender identity. He is a member of the LGBT Equality Caucus in the House.

Another vendor was the American Foundation for Suicide Prevention, which was promoting its Out of the Darkness Walk and offering resources for the LGBT community.

According to the Trevor Project, LGB youth seriously contemplate suicide at almost three times the rate of heterosexual youth and are almost five times as likely to have attempted suicide. In a national study, 40% of transgender adults reported having made a suicide attempt — the vast majority of them prior to the age of 25.

“We have so many resources we can provide,” said Logan Crews, co-chair for this year’s Out of the Darkness Walk.

Advocacy organization PFLAG was also on hand. PFLAG bills itself as the first and largest organization of LGBTQ people, their parents and families, and allies.

“We’re here to support our families,” volunteer Kasha Herek said. PFLAG Hampton Roads has monthly meetings in Chesapeake on the second Tuesday from 6:30 to 8 p.m. People interested in attending are asked to email pflagHR@gmail.com.

Faulks was pleased to see the large turnout for a first-ever event.

“No matter who they are, love is love.”

Feliu said the organization plans to continue the event and grow it each year.

“We started off small this year, but we want to keep growing and getting bigger and making it a yearly thing.”