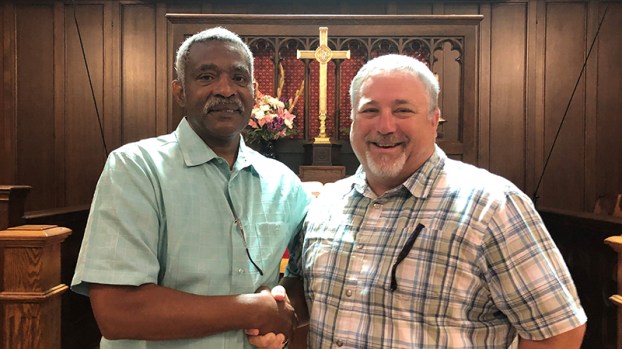 The Rev. Derrell Wade of Macedonia African Methodist Episcopal Church and the Rev. Richard Meiser of Main Street United Methodist Church created a partnership between their churches that reflects the true love of God.

A picture of unity

A historical friendship between churches was renewed once again in the last year after a natural disaster.

The Rev. Derrell Wade serves as the pastor of Macedonia African Methodist Episcopal (AME) Church, which sustained structural damage in the August 2020 tornado. Due to COVID-19, the church could meet virtually for a while. Eventually, the congregation wanted to meet in person again, and the church met in the parking lot starting Easter Sunday. However, once June brought in scorching temperatures, Wade knew his congregation could no longer meet outside.

On June 14, he called the Rev. Richard Meiser of Main Street United Methodist Church to see if they could use its facility. Meiser told Wade to look no further — the church was open for whatever they needed.

“We are so excited to be able to be together and give praise to our God,” said Wade. “It is awesome and God-inspiring. Everyone from the pastor to the minister of music to the trustees has just been fantastic. Our faith family is overwhelmed with joy and thanks to them and our almighty God.”

“It’s very, very cool,” said Meiser. “I feel very fortunate and blessed to have the facility to offer Macedonia. They’re like our sister church.”

According to the churches’ history, the two churches have a relationship that dates back to the Civil War era. In the 1800s, several Black and white congregations worshiped at a meeting house in Cedar Hill Cemetery. Eventually, that meeting house was dismantled. The Methodist Episcopal congregation, now Main Street United Methodist Church, built a new church building. In 1868, those members helped its Black members acquire the lot on Pine Street where Macedonia African Methodist Episcopal Church still stands and donated materials for the building.

“There’s only one Heaven, and we are serving only one God,” said Wade. “Before the Civil War, we worshiped together. The key issue is that we’re all Christians coming together to glorify God.”

The members of both churches are delighted about this new partnership and plan to host joint services in the future. These pastors believe their congregations are setting an example of what the church as a whole should be.

“We hope that the community will see what we are doing and be more open to it, because churches seem to still be a segregated time of the week,” said Meiser. “The goal of our faith is to see our brothers and sisters as God sees us. We hope this encourages churches in our area.”

About 118 individuals are being evacuated from a downtown Suffolk apartment building after a major water leak emerged earlier on... read more