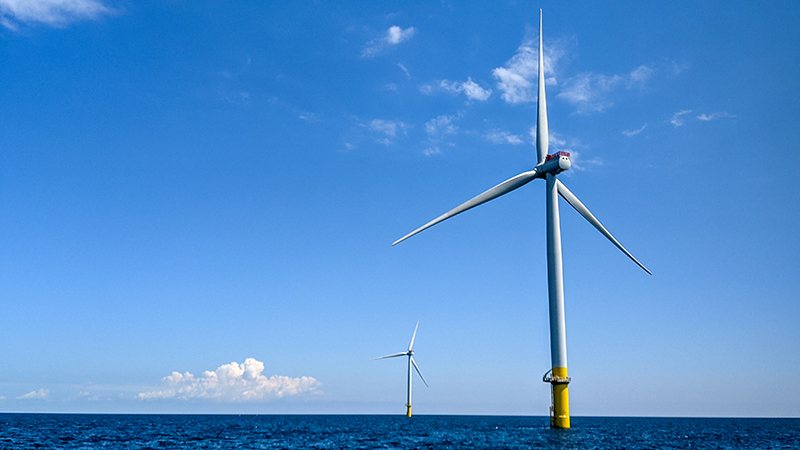 The Port of Virginia is positioning itself to be a key driver in Dominion Energy’s efforts to build 180 wind turbines anywhere from 27 to 42 miles off the Virginia Beach coast for more than $8 billion.

The state and Danish offshore wind developer Ørsted came to an agreement last year to have it lease 1.7 acres at Portsmouth Marine Terminal to the company for offshore wind equipment and staging materials through at least 2026, with options to expand to an additional 40 acres. The agreement could be worth about $13 million in lease payments, with potential site upgrades worth more than $20 million.

Regional institutions such as Tidewater Community College, Centura College, Old Dominion University and high school career and technical education programs will have an outsized role in training and staffing the roughly 900 direct and indirect jobs during the construction phase, according to an economic impact study by Mangum Economics and commissioned and published by the Hampton Roads Alliance, a non-profit regional economic development organization.

The project, according to the study, will bring approximately 1,100 direct and indirect jobs across Hampton Roads and nearly $210 million in economic activity once the turbines from the Coastal Virginia Offshore Wind project are operational, which is expected by late 2026.

During construction, the project is estimated to generate nearly $5 million yearly in local and state taxes, and $11 million once it is commissioned and operational.

Siemens Gamesa, which supplied the two wind turbines now in the Atlantic Ocean and named as the preferred turbine supplier for the entire project, has said it is considering building a $200 million blade manufacturing plant to employ 750 people somewhere in Hampton Roads, according to published reports.

It will also complement complicated, and at times controversial, efforts in Chesapeake, Suffolk, Western Tidewater and across the state to expand the presence of solar farms as another renewable energy source needed by the state’s power as Dominion looks to meet energy generation and zero-carbon electricity targets by 2045 as mandated by the Clean Economy Act, signed into law last year. The state’s overall carbon emissions must be zero by 2050.

The State Corporation Commission in May approved Dominion’s plans to buy power from six solar farms — totaling 500 megawatts — and own and operate three others. In the Western Tidewater region, Dominion is purchasing power from the 20-megawatt Pleasant Hill Solar Center in Suffolk, the 240-megawatt Cavalier Solar project in Isle of Wight and Surry counties and the 118-megawatt Chesapeake Solar project.

Suffolk city council members last month were critical of a proposal and unanimously denied a conditional use permit to site a solar farm in Whaleyville, with some saying the city needs to get a better handle on regulating them and clarifying guidelines for applicants and residents.

But Gov. Ralph Northam, Dominion Energy and other officials appear bullish on the future of renewable energy as a catalyst for the state’s economy and increasing clean energy sources, as the project is expected to eliminate millions of tons of carbon dioxide emissions every year.

“We talk about solar, we talk about wind,” Northam said during a stop last month in Suffolk. “Another thing to think about is the grid. And we’ve already had discussions with companies that are interested in helping with the grid.

“Just the promotion of solar, of wind, of renewable energy, it brings other businesses. It puts people to work and right now, Virginia is in a really good position.”

A recent report by the Solar Energy Industries Association and Wood Mackenzie had Virginia ranked fifth with 236 megawatts of new solar capacity in the first three months of 2021.

Those two energy sources, as well as what it considers clean energy in the form of nuclear power from places like the Surry Power Station, and other existing power sources such as hydroelectric, coal — until 2024 — and natural gas, have been emerging players, but not without significant financial and other tangible costs.

The Nuclear Regulatory Commission in May extended the licenses for Surry’s two nuclear reactors to 2052 and 2053, respectively, and is considering a request to do the same for North Anna’s in Louisa County. Dominion uses electricity from those two nuclear sites as one-third of its electricity for the state’s 2.7 million customers in Virginia and North Carolina.

But the port, in the process of widening and dredging its shipping channels to a 55-foot depth, can’t be that driver for its efforts until Dominion gets its vessel to bring the needed components out to the 112,800-acre federal lease area east of a current pilot project that is home to two six-megawatt wind turbines that can power up to 3,000 homes.

The act requires items shipped between U.S. ports to be moved on ships built and operated by U.S. citizens or permanent residents. The fiscal year 2021 National Defense Authorization Act, more precisely, Section 9503 of the $370.5 billion act, requires the use of Jones Act vessels for the construction of offshore wind farms.

When Dominion put up the two turbines now off the Virginia Beach coast, there was no Jones Act-compliant vessel with the capability to bring what it needed to the site. That’s why Dominion operated from Canadian waters, and that’s why Dominion joined a consortium to build a larger Jones Act vessel.

Dominion now has a $500 million Jones Act vessel being built in Brownsville, Texas, in partnership with Ørsted and Eversource, and it is expected to be sea-ready by late 2023. The 472-foot vessel is being built with domestically sourced steel, and once built, its homeport will be in Hampton Roads. The vessel is being designed to handle current turbine technologies and next-generation turbine sizes of 12 megawatts or larger, and will be able to handle the installation of turbine foundations.

Lloyd Eley, the site construction manager for Dominion Energy’s offshore wind project, said the vessel will help in a number of ways.

“It definitely will help in general with construction,” Eley said. “It could also be able to assist us with having different resources that support each of the different loadouts and components being based in the Hampton Roads area. And there’s also major economic development opportunities available with having a base in the Virginia Beach area that can accommodate being able to use offshore wind components in the Hampton Roads area and taking it to the site off the coast of Virginia Beach.”

Dominion officials on a boat tour of the pilot project’s two turbines said they are learning daily lessons from it, like how they will operate in different weather conditions, how marine life interacts with and affects it, and how fishing and commercial vessels interact with it.

Carroll and Scott Lawton, Dominion’s environmental technical advisor, said they have seen few birds around the two turbines out there, and no evidence of any bird strikes on the turbines. Cameras are installed on both turbines to monitor such activity. They have noticed increased marine life around them, however.

“At no point are we going to put our guard down and say we’re done studying,” Carroll said. “It’s going to be a continual process and continual learning.”

Carroll said they are exploring the installation of an aircraft detection lighting system for planes flying at night near the turbines. It’s possible, he said, that under certain circumstances, Dominion would have to turn off the turbines.

As for vessel traffic in the area, so far they have tended to travel on either side of the turbines rather than between them.

At this point in the project, Dominion held public meetings on the project in Virginia Beach and Chesapeake, and it reached the next phase in the project, as the federal Bureau of Ocean Energy Management begins what will be a two-year environmental review process for it.

About eight months into their operation, the two wind turbines operating off the coast are producing more power than expected, according to Carroll, keeping about 98% uptime, with the vast majority of the downtime due to maintenance.

During the summer months, Carroll is expecting lower wind speeds and the use of solar power to heat up.

From a boat, the two turbines cannot be heard until it is at a near-standstill. At that point, its sound is akin to a gentle wave washing ashore at the Virginia Beach oceanfront as the three, 253-foot blades on each turbine do their revolutions. Only on the clearest of days would anyone wading into the water notice with the naked eye the two specs that turn massive and intimidating when riding a boat under them.

The two wind turbines connect to the power grid via underwater cable now, and the 180 turbines to be built would also connect underground, eventually making their way to Dominion’s Fentress substation.

Northam, who has toured the offshore wind project, touted its benefits to the region and state’s economy and environmental outlook about it. The state is moving toward more renewable energy sources, and he expects it to pull in other employers that will diversify the region’s economy while augmenting it as a maritime hub.

“Promotion of offshore wind is about 14,000 jobs, and we are well-positioned in Virginia, we have a great port that we don’t have to go under bridges, so not only can we assemble the turbines … we can (also) do that in Hampton Roads,” Northam said, “and we can serve the entire East Coast. It’s (got) tremendous potential and it’s just a win-win for Virginians, it’s a win-win for the environment and it helps a lot of people.”

Another project off the northeast North Carolina coast with similar expected power generation, the Kitty Hawk Offshore Wind Project to be located 27 miles off the coast of Corolla — the project developer is Avangrid Renewables — is also expected to impact Virginia since its landing cables will come through a substation in Virginia Beach’s Sandbridge area and then have other connection points in the city. Construction is expected to start in 2024.

Combined with Dominion’s offshore wind project, the Kitty Hawk project is expected to be a boon for Virginia, as the Hampton Roads Planning District Commission calls offshore wind “a $70 billion opportunity” for suppliers to meet state offshore wind requirements.

Eley said it will take a convergence of events to bring the Virginia Beach offshore project to fruition, and it is still several years away from potentially providing power to residents in the Hampton Roads region and the state.

“It’s a combination of a couple of different things,” Eley said. “One being, as a vessel that’s capable of installing these components. The second thing that comes to mind is resources available to support the project. That’s a big piece of it, having the resources to be able to do that, to build such a large-scale project.”

But even with a notice of intent filed July 2 with the federal Bureau of Ocean Energy Management for an environmental review of Virginia Beach’s offshore wind project, Dominion officials caution that it is far from certain what the outcome of the project will be. Carroll said the public would have ample opportunity to weigh in, and Dominion, while it believes it has a good plan, wants more input.

“That doesn’t, by any means, mean that ‘Hey, this construction and operations plan is good to go,’” Carroll said. “That’s a sufficiency review. They’re simply looking through and making sure that this has all the elements of a plan.”