Always a song and Hope for her students 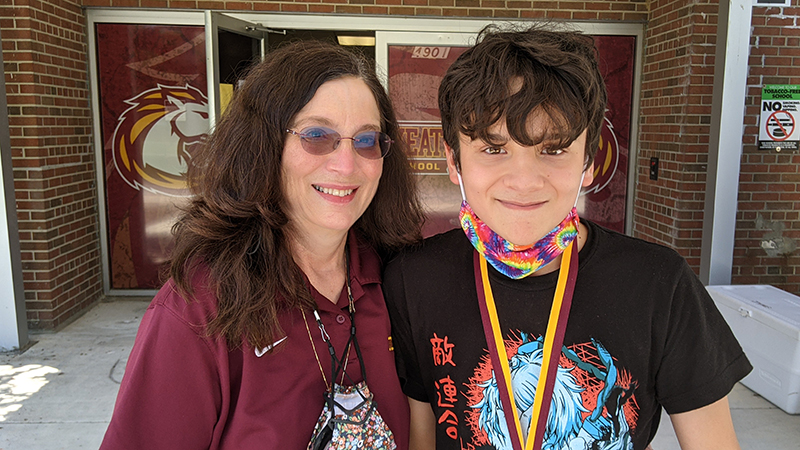 Hope Paquette, left, with student Thomas Spry, said he and her other students inspired her to be a better teacher. Paquette retired from full-time teaching in June after 42 years of teaching, the last 31 of them as a math teacher at John Yeates Middle School.

“It was perfect,” Paquette said. “It’s across from the gym. I get to make all the noise I want. And it’s at the parking lot, so I get to see parents when they come to pick up their students from after school tutoring. That was the perfect room for me.”

About eight years ago, she had asked for that room, as she was teaching an inclusion class at the time and it was set up for her to put kids in teams.

But there was another reason.

Paquette has always loved the chaos of middle school students, always controlled through a voice and a heart filled with song.

During the school’s eighth-grade celebration, she stood in front of the school, carrying a tune to direct a child to put away a Frisbee.

Why don’t you put it back inside the room?

But somewhere it won’t be in a Zoom.

“American High School Musical junior high edition,” Paquette said with a chuckle, OK with the fact that she didn’t always sing in tune while acknowledging she read a plethora of Dr. Seuss stories growing up. “A lot of times I wasn’t. Kids don’t care. All they care is that you try, and you try to make it engaging and interesting. That’s what I tried to do with them all the time, and they never knew when it was going to happen. And it’s never the same twice.”

For 42 years, Paquette had a song in her heart and made both subjects sing for her students, the last 31 years of her teaching career at John Yeates Middle School.

She had planned to retire after last year with her husband Andre, but because last year finished in virtual learning due to the coronavirus pandemic, she didn’t have the sense of closure she wanted, and returned for one more year.

“I told him I couldn’t go out that way,” Paquette said. “I couldn’t go out not saying goodbye. This year was different, but I am so thankful I did it, ‘cause it has given me some closure. It’s given me a path to know something to do when I come back, and to finish up with this group of kids, because they’re awesome.”

After being able to have students back in the classroom this spring when some students returned for hybrid learning, it was time.

Still, even with plans mostly set for what she plans to do in retirement, she waited until the last minute to turn in her paperwork.

Paquette and her husband plan to tutor children in music and math, hence the name, M&M, for the business. And she plans to return to John Yeates to teach part-time as the school’s algebra readiness teacher.

Principal Dr. Wendy VanHosen described her as the epitome of an excellent teacher — “a jewel of a teacher (and) a jewel of a person” — doing everything she could to make sure a student learns and thinks critically and creatively.

“She teaches with the same energy and passion as if it were her first year,” VanHosen said, “but with the wisdom of 42 years.”

Paquette’s faith is never far from her.

Paquette has played the organ for her church, Raleigh Heights Baptist Church in Chesapeake, since she was 11 and is currently its minister of music, having been on its staff since 1976. She began teaching in Suffolk three years later.

“Without my faith — that is what has made this job so much fun,” Paquette said. “And this has been my mission field. There are some good days, and there are others where you’re wondering, ‘God, what do you have in store here?’ But He’s got a plan, and it has always worked out.”

“She’s amazing and wonderful, and I call her mom,” Poole said. “She’s ma-ma.”

All of them, including world geography teacher Jenn Putzig, said Paquette has been a role model not only for students, but also for colleagues like herself.

“They can fill her position next year,” Francisci said, “but she can never be replaced.”

Thomas Spry walked up to hug Paquette, his algebra teacher in seventh grade and geometry teacher in eighth grade.

“You’re going to ask me Algebra 2 questions, even though I’ll probably have to ask you.”

Paquette said Thomas and her other students teach her, and they have fun and explore together.

Thomas calls her unique among teachers.

“She’s the only teacher I’ve ever had who jokes around with the whole class,” Thomas said. “She has an inside joke with every single classmate, so everyone feels included. It’s nice.”

He didn’t start out being as interested in math as he is now after finishing Paquette’s eighth-grade class.

Paquette gave him the nickname, Silent Lunch, for a reason.

It’s what happened when he didn’t pay attention in class as a seventh-grader.

“I got it almost every day last year,” Thomas said.

So what happened this past year?

He got all As.

“Thomas is an example of the fun in teaching, because he had a whole lot of energy as a seventh-grader,” Paquette said. “He still has a lot of energy, but it is really more focused and directed now. And he is going to set the world on fire, because he has so much ability.”

It’s what she loves about teaching, and what makes it so difficult to give up.

“Finding what each child has, tapping into it and then pushing them further than they ever thought they could get,” Paquette said, “and he’s an example of a person who’s done that.”

She learned a lot from her early mentor and now-retired teacher Alice Brown, but not in the way she expected. Brown was more conservative and controlled in her approach to teaching, wanting everyone in their place, at attention and ready to learn.

A Hope Paquette class, though, was seldom quiet.

“I told her one time, I said, ‘Ms. Brown, I wish I could be more like you,’” Paquette said. “And she looked at me and said, ‘Nope. Those kids need me, but then they need someone like you, too.”

But if not for a cruel twist of fate, Paquette would have never taught math.

She began her teaching career as a chorus teacher at what was then John Yeates High School, and at the then-John F. Kennedy High School, but seven years in, after a growth on her vocal cords caused her to quit singing, Paquette went back and got a math endorsement.

She intended to teach chorus again when her voice returned. It did, but she stayed with math. And every year, the young teens who came through her class multiplied the joy in her heart.

“I was going to temporarily teach math until the voice healed up,” Paquette said. “But 35 years later, I’m still here (and) I sing all the time, too.”

Her song may have sounded different, but she kept in tune, if not vocally, then with the students and her subjects.

“I just have started off every year almost brand new,” Paquette said, “looking for what worked last year.”

She would ask her students what worked well and what didn’t, and what would have made the concepts easier to learn. Where possible, she adapted them to her teaching, self-reflected and refocused on the new group she would be teaching.

It also helped to have supportive colleagues and principals.

He and the others outside laughed, but she remembered that, even though she would be retiring from full-time teaching, she planned to return in the fall to teach part-time.

“Oh wait a minute, that’s right. You’re deciding if I get a job in the fall,” she said. “Yes, yes, awesome, awesome administrators.”

As colleague after colleague and some of her students stopped to hug Paquette and say goodbye, tears welled, and the number of “I love yous” swelled.

So it wasn’t hard to imagine that all of the John Yeates staff, and many previously-retired teachers turned out days earlier for a farewell party for a teacher who had an indelible impact on them, and on children.