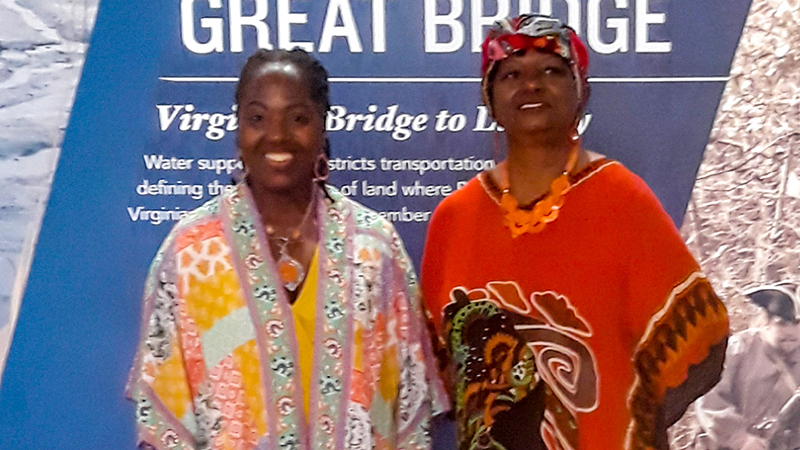 Local poets Sylvia Bond and Tonya Sinclair Swindell, recited original poetry on June 19 to commemorate Juneteenth, a newly established federal holiday that commemorates freedom from slavery that was officially granted to all enslaved people in the United States on June 19, 1865.  Although The Emancipation Proclamation went into effect on Jan. 1, 1863, enslaved men, women and children in Galveston, Texas were not informed until June 19, 1865.  Juneteenth, which combines the words “June” and “Nineteenth,” has been recognized and celebrated by many African-Americans over the years, but 2021 was the first year in which it was instituted as a holiday by the federal government.

June 19, 2021 also marked the one-year anniversary of the Great Bridge Battlefield and Waterways History Foundation and Museum Center located at 1775 Historic Way, Chesapeake.  Elizabeth Goodwin, executive director, and Ms. Jean Carideo, secretary of the Foundation, indicated the museum was originally scheduled to open months earlier in 2020. However, delays in planning due to the impact of COVID-19, resulted in the museum opening on a day that now has even greater historical significance.

Goodwin said her desire is to highlight the museum as a source of information and inspiration that provides accurate but oftentimes difficult depictions of history. She feels doing so is a great opportunity to promote dialogue among individuals visiting the museum, which can lead to greater appreciation and mutual understanding of unifying messages like endurance, perseverance and freedom.

Ms. Bond recited a poem she wrote titled, “Nobody Heard My Song,” in addition to other poetry written by Henry Wadsworth Longfellow and Langston Hughes. Swindell recited her original poem, “A Call To The Descendants Of The Maroons.” Each poem shed light on aspects of what may be a little-known event in local as well as international history in which enslaved people of African descent retreated to uninhabited, swampy wetlands to live and in some way possess a semblance of freedom after escaping slavery, prior to the 20th century.

Two of the recited poems vividly described what life may have been like for the maroons who lived in the Great Dismal Swamp during that time period.

Lee Ann Rose of Shades of Our Past LLC introduced the presenters and read excerpts from “Narrative Of The Life Of Moses Grandy,” a locally enslaved man who was made to purchase his freedom three times before it was granted. Grandy later purchased freedom for his wife and children.

Ezekiel Swindell and Bond also read portions of Grandy’s narrative for attendees to hear. The readings provided a glimpse into Grandy’s firsthand experiences as an enslaved person from childhood to adulthood. Moses Grandy’s narrative described the harsh and life-threatening conditions under which he labored as a waterman to excavate and build the Great Dismal Swamp Canal into the valued waterway that it is today.

Bringing leaders to the forefront