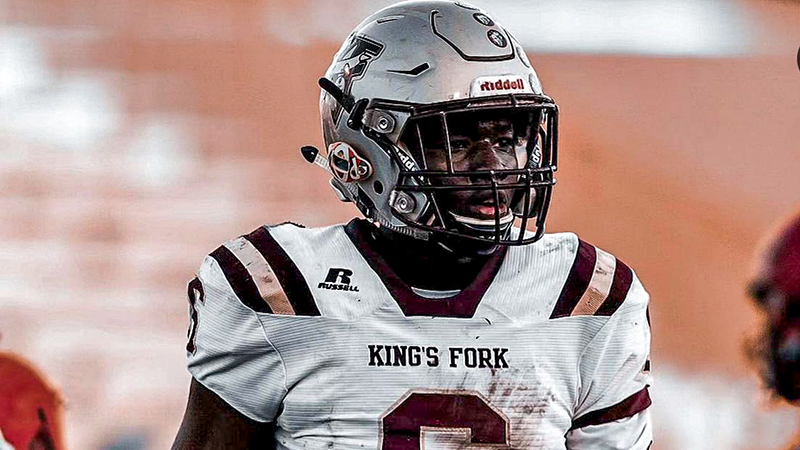 Kyree Moyston’s football development was undeterred by the coronavirus pandemic.

The interest in Moyston, a 6-foot-5, 225-pound pass-rushing defensive end who doesn’t mind dropping back in coverage, ran the gamut, from local and regional schools such as Old Dominion, Liberty, East Carolina and Campbell, to Virginia Tech and Pittsburgh of the Atlantic Coast Conference, Big 10 schools Indiana and Michigan State, Pac 10 schools Arizona, Arizona State and Washington State, and Big 12 schools West Virginia and Kansas.

The rising senior said the Hokie program felt like family, which was a key factor in his decision. When he visited Virginia Tech last month — he scheduled an unofficial visit just before his official visit, giving him three days in Blacksburg — Moyston met with the coaches and felt that because of communication between them and him, it was as if he already knew them. He also said the Hokies’ defensive scheme fits well with his skill-set. He plans to study dentistry while in college.

“It felt like the best place for me to go,” Moyston said. “I like the family environment and all that type of stuff.”

Moyston, considered a three-star recruit, was initially limited in being able to visit colleges due to the pandemic, but said the recruiting process was easier when he could see them in person.

“It was kind of difficult at first, but once it got around to the time where I could get around and go see the schools, and do all the stuff like that,” Moyston said, “it became a lot easier.”

King’s Fork coach Anthony Joffrion, who just finished his first year heading up the Bulldogs football team, said the Hokies are getting a highly skilled, selfless player who was looking for a family atmosphere in a program.

“The biggest thing with Kyree is that he’s very family-oriented,” Joffrion said. “He really embodies being part of a team. It’s not about him. It’s always been about King’s Fork and the team, and the family and the brothers that we have on the team as well.”

On unofficial visits to colleges, Moyston brought teammates with him to try to get them exposure, and he was quick to credit them, his King’s Fork coaches and his family with helping him along the way.

Moyston, 17, is part of a senior class at King’s Fork that has played together since the seventh grade and are tight-knit, Joffrion said.

“When Kyree was getting his scholarship offers, they felt like they got it as well,” Joffrion said. “They’re that close-knit of a group.”

As a player, Joffrion said Moyston, typically a defensive end but also used as an outside linebacker in a 3-4 scheme, used to shy away from the weight room when he was in middle school, but he had a transformation in his sophomore year.

“He started taking the weight room seriously and really started understanding that he can actually go somewhere with his ability,” Joffrion said.

And when COVID-19 meant that the team couldn’t hold workouts, Moyston worked with multiple personal trainers to keep him in shape and focused, adding about 15 pounds in muscle while also focusing on his nutrition. Then, he had a strong spring season competing against only city schools Lakeland and Nansemond River.

In this shortened offseason before the regular fall season, Moyston has been focusing on his technique and is primed for a strong senior season.

“He’s really transformed his body from being just a tall, lengthy kid in middle school to now — he looks like a grown man,” Joffrion said.

Moyston said he is looking forward to his final year at King’s Fork, and both he and Joffrion expect that other seniors will be making Division I commitments before long.