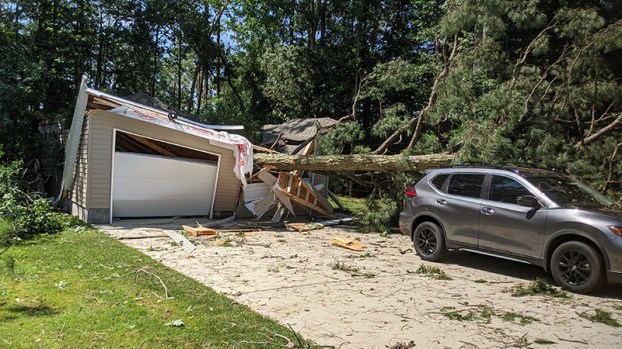 A pine tree fell on top of a detached garage in the Kings Point Drive neighborhood after an apparent tornado struck during the early evening July 8. Ean Greene, who lives at the home with his parents and girlfriend, said they are thankful that no one was hurt. 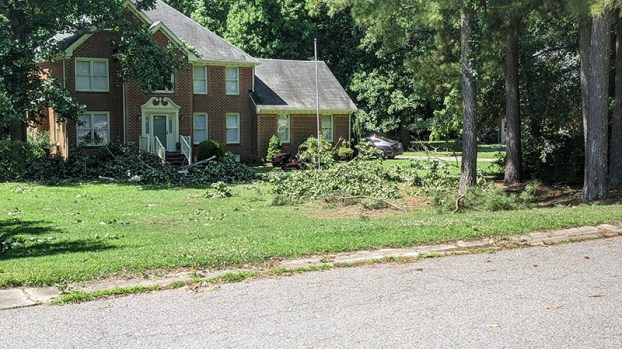 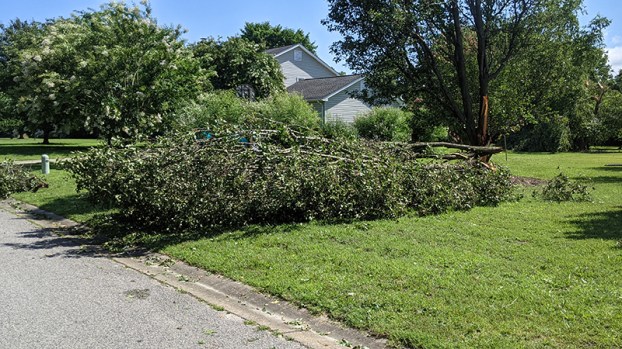 When Ean Greene was around 6 years old, he got a healthy dose of the frights when a tornado struck their Kings Point Drive home.

So 20 years later, when a pair of tornado warnings came through while he, his girlfriend and his mother were watching “Fantastic Beasts: The Crimes of Grindelwald,” he heeded the warning, even as curiosity nearly got the best of him and his girlfriend, Summer Hurley.

As she was shooting video of the approaching storm from their side porch, they got a close encounter with it — close enough for them to bolt inside.

At that point, Greene knew a pine tree had struck the fence in the backyard, but his view out the window in the kitchen didn’t allow him to see the damage to the garage.

Greene, his mother, Marie Greene, his girlfriend and dog stayed in the laundry room until the storm passed, and Friday morning they were outside assessing the damage. His father, Joe, was at work at Newport News Shipbuilding at the time.

At the time, Greene couldn’t see that the tree had fallen on top of the garage, but at that moment, he didn’t care. He rushed back to the laundry room to wait out the storm.

Afterward, he saw what had happened.

And though the storm did significant damage to that garage and what is still pinned inside it, like his neighbors, they came out unscathed, uninjured and most thankful.

“I’m pretty glad that nobody got hurt, in all honesty,” Ean Greene said. “That’s my biggest thing. This is all material stuff.”

At the Greene home, they are waiting on their insurance company to assess the damage, which he said could happen in the next three to five days.

Just down the street at Cheryl Griffin’s home, she, too, heard the approaching tornado, which damaged a gazebo in her yard.

“We were sitting there — we didn’t hear the train and all that stuff, we just heard very bad wind,” Griffin said. “My husband was looking out the window and I’m like, ‘Get away from the window.’” … By the time we could get it all together, it was gone. I’m like, ‘Something just hit us,’ because, there goes the gazebo.”

Though other trees and limbs in the immediate area snapped or lost limbs, and there was damage to Griffin’s gazebo just down the street, damage to other structures appeared minimal.

“I don’t think any houses were damaged, which is a blessing for sure,” Griffin said. “We were very lucky.”

The remnants of Tropical Storm Elsa brought between 1 and 1.6 inches of rain to Suffolk, Isle of Wight County and the Courtland area of Southampton County. Just over 2 inches of rain fell in Franklin.

But there were multiple tornado warnings that were more concerning for Suffolk and Western Tidewater residents. The National Weather Service said a weak EF0 tornado snapped a few trees and tore limbs out of trees near Quaker Road and Lummis Road to near Quince Road around 7:04 p.m.

Then around 7:16 p.m. a reported tornado moved through the King’s Fork area from around U.S. Route 460/Pruden Boulevard at Tractor Supply, with outbuildings there overturned while it snapped numerous limbs and tore out treetops. Mike Rusnak, a meteorologist with the National Weather Service’s Wakefield office, said an employee was able to drive by the area late Thursday evening and see numerous limbs snapped off of trees, along with damage to a Tractor Supply building.

Rusnak said a more complete assessment of the tornado was to take place Friday.

Around that time, winds in the area were 29 mph and gusting to 51 mph. Over the course of the evening, winds were steady from the south and southwest around 20 mph with gusts up to 30 mph.

In Smithfield, in Isle of Wight County, a reported tornado that moved from Jordan Drive across the Pagan River to Blounts Corner Road took down trees, with one on a home.