Serving food in a unique way 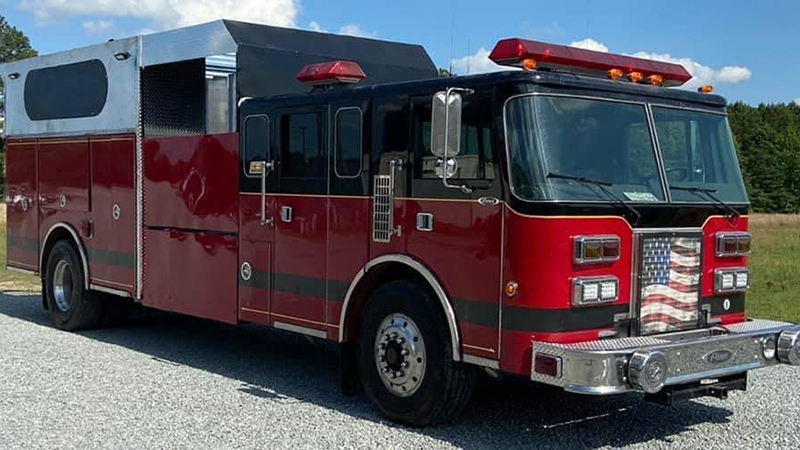 Hook & Ladder BBQ Co. is open for catering out of its unique firetruck venue.

Pulled pork barbecue is a staple food in the South. However, no one on the East Coast is serving it up quite like this.

Hook & Ladder BBQ Co. is a special kind of food truck — a fire truck. Owner Josh Towers is a volunteer firefighter with the Whaleyville Volunteer Fire Department and has combined his two passions to make this possible.

For years, Towers and his dad would cook barbecue for family and friend events. Loved ones told him that the barbecue was so good he should start his own restaurant. Even though his father has now passed, Towers decided to try a food truck, but not in just any truck.

“I’ve been a volunteer firefighter in a few cities, so I’ve been around fire trucks since I was 18 years old,” he said. “People said I was crazy, but I looked to see what would work or not. I had in my head what I was looking for.”

Towers is the second owner of this fire truck and has documents showing its unique history. This fire truck was the first in its area to have certain features like an onboard generator, preconnected HURST Jaws of Life system, light tower, class B foam system and SCBA fill station.

“I think it’s super neat I’m the second owner,” Towers said. “I have all the history and blueprints and I want to put a shadow board up so people can see it when they come.”

Over the following months, Towers and some friends stripped the truck down to its frame to rebuild it to have a fully functional kitchen instead of putting out fires. Near the end of June 2021, the smoker was put into the truck.

The truck is still not fully functional as a food truck, but Towers is currently taking the truck to events to serve pre-made food out of it as a catering service. Towers has partnered with a kitchen in Norfolk to safely make food to serve out of the truck until the fire truck is ready to be a full-service kitchen.

According to Towers, a food truck fire truck is the first of its kind on the East Coast. There are some on the West Coast and even an ice cream truck fire truck in the Midwest, but nothing in this part of the country.

“I’ve talked to the ice cream truck in the Midwest a lot during this process,” Towers said. “I think it’s neat to be the first of its kind around here.”

Hook & Ladder BBQ Co. has already catered at well-known local events, including the Gates County Rodeo in May. The next stop on its route is the Family Fun Day from 11 a.m. to 3 p.m. on July 24 at Liberty Spring Christian Church, 4213 Whaleyville Blvd. The event will also include water games, music, a bounce house and more.

Visit the Hook & Ladder BBQ Co. Facebook page for more information on its history and progress.