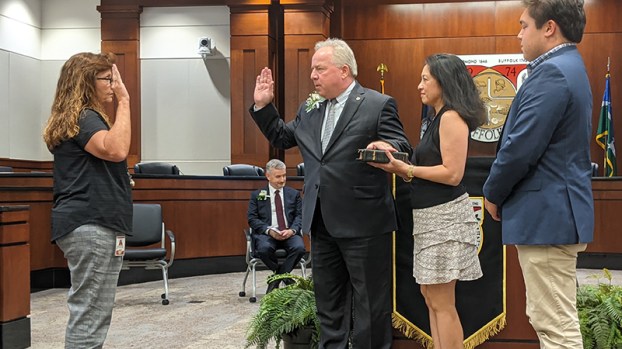 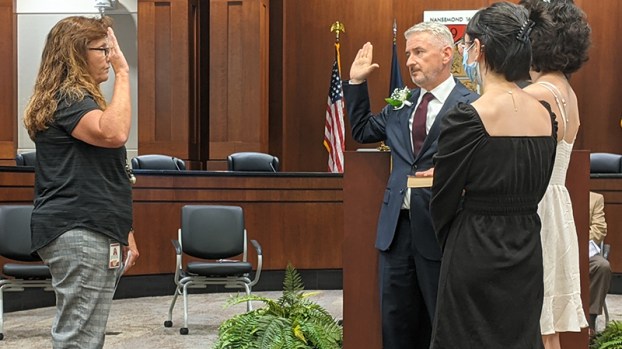 Hutchings had been appointed interim city attorney March 4 after former city attorney Helivi Holland was appointed to serve as a judge for the Fifth Judicial District. He thanked his family and his predecessor and his staff for helping him along the way.

“I am truly excited to take on this new role and continue to serve the city that has been my home since 2006,” Hutchings said. “I’d like to thank my family for all their love and support, and I’d like to thank Helivi Holland, Judge Holland, for providing me with the experience and skills that I believe will help me do this new role well.”

Mayor Mike Duman noted that the two had a combined 56 years of experience, 37 of those in Suffolk. He praised Hutchings for his legal acumen and the clarity in which he explains the law.

“Mr. Hutchings is well-versed in the law and presents his opinions clearly and succinctly,” Duman said. “He is responsive, accessible, dedicated and committed to providing our city with exceptional legal advice.”

Duman said that Moor, in managing more than 1,400 employees and a nearly $700 million budget, is responsible for the day-to-day operations of the city and someone with whom he speaks near-daily, and sometimes multiple times daily.

“My experience has confirmed that he is dedicated, compassionate, responsible and steadfast,” Duman said of Moor. “His character, honesty, forthrightness and trustworthiness (are) unquestionable. Through his actions, he has exhibited an unwavering desire to do what is in the best interest of our city, our employees and our citizens.”

Moor said being city manager is humbling, but he appreciates the trust placed in him. He acknowledged the challenge presented to him when he took over on an interim basis, and praised the city’s employees for their work in the last 16 months especially.

“It was some difficult times,” Moor said. “I can’t thank you enough for stepping up and carrying the load of the (coronavirus) pandemic, but you did — unbelievable, and I thank you all from the bottom of my heart.

“I look forward, as we move ahead, to working with you as we accomplish the goals ahead of us, council’s priorities, in making sure that we make Suffolk a place that people want to come to. That’s our goal.”

Moor thanked his family, and said he was humbled, happy and filled with renewed energy.

“I look forward to carrying the ball, along with William,” Moor said, “and moving this city forward.”