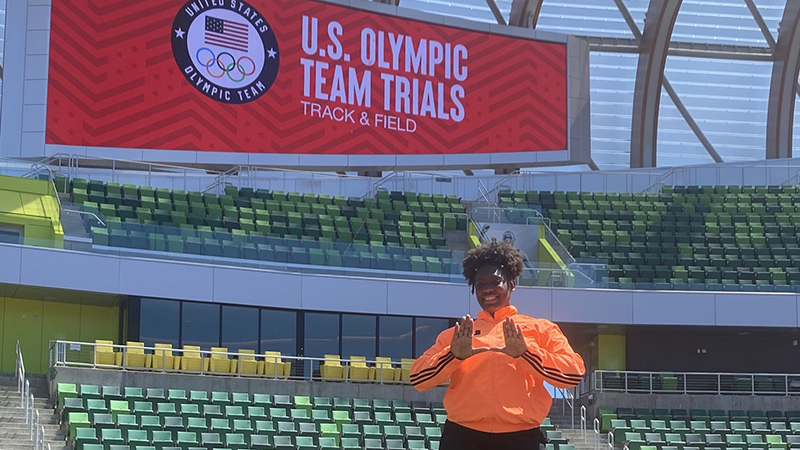 Two Nansemond River High School graduates competed at the Olympic Trials in Eugene, Ore., last month and, though they both narrowly missed the U.S. team in their respective events, they said they are grateful for the experience.

When Zakiya Rashid was watching the Olympics on television in 2012, she made a vision board that featured the multi-colored Olympic rings and a hand-drawn depiction of the torch. Under it, it said “Olympics 2020!!!”

It’s not 2020 anymore thanks to the COVID-19 pandemic, and Rashid didn’t quite make the team. However, she now has her sights set on other goals for her future — including, perhaps, the 2024 Olympics.

Rashid, 24, a 2015 graduate of Nansemond River High School, ran track and threw discus and shot put in high school. Over the years in college, though, she decided to focus on discus.

Due to a nagging ankle injury as well as the COVID-19 pandemic, she was in her sixth year of competing for the University of Miami this year. In her second meet, she set a new school record by throwing the discus 57.68 meters. Unfortunately, soon thereafter, she injured her ankle again, but she recovered just in time to practice for a couple of days before going to the ACC meet, where she finished third.

“That was amazing after having that much time off,” she said. “It was only a couple centimeters off of my PR (personal record).”

She finished the season off by being named to the All-ACC Academic Team.

Rashid said she had a great experience at Olympic Trials, despite not making the U.S. team.

“The Olympic trials experience was amazing,” she said. “I had never been to Oregon before. That was my first time flying over there and pretty much competing with professionals in general.”

Rashid said the record-breaking heat that plagued the last few days of the trials and forced officials to reschedule events to the middle of the night didn’t start until after her part of the competition was done, so she didn’t have to worry about that.

Rashid missed making it out of the qualifying round, throwing the discus only a little over 55 meters. Still, she was satisfied.

“I was super-happy with that,” she said. “I was really blessed to end my season off with a number above 55.”

She anticipates that will prepare her well for next season, when she hopes to turn professional if a second surgery on her ankle is successful.

Rashid’s next goal is to make the U.S. team for world championships next year, which will be held in Oregon — hopefully without the oppressive heat.

And her longer-team goal is that when the 2024 Olympics come around, she will be headed to Paris to represent the United States on the world’s biggest sporting stage.

“My thought is that hopefully I will be on that team,” she said. “That’s my goal. I will be working toward that.”

Sha’Keela Saunders, a 2012 graduate of Nansemond River High School, attended and competed in the long jump for the University of Kentucky after her time with the Warriors.

In one of her last high school meets, Saunders tore her ACL at the Penn Relays, and that impacted the start of her college career. However, her coach understood, and she redshirted her first year after undergoing a successful surgery.

In her redshirt freshman year, “I was doing awful,” she said in an interview recently. “I was jumping worse than I was jumping in high school.”

At a conference meet that April, her coach motivated her by saying he was going to give her “one more shot.”

“He took me to a meet in Texas,” she said. “I won that meet, and I jumped two feet better than I had been jumping in high school.”

That performance got her to a regional meet, where she also won and set a new personal record by an entire foot. That got her to nationals, where she placed second — to Jenna Prandini, who will be competing in Tokyo this month at the 100-meter and 200-meter distances.

“That was the best defeat I ever had,” Saunders said. “I was so happy with second, because that year was awful. That was a turning point for me. I actually believed what my coach thought I could become. I started training as if I believed I could be more.”

Saunders went to Olympic trials in 2016 and came in fourth place, missing a spot on the Olympic team by only one place. After the 2017 season, she turned pro, hiring an agent and snagging a contract with Adidas.

She said this past year was difficult for her, and it included a bout with COVID-19 last September that sidelined her for two weeks. She became a vegan and intentionally tried to keep positive energy around her, even rooming at the Trials with two other women who were all lifting each other up. They did mind meditation and yoga and watched movies like “The Lion King,” “Avatar” and “Kung Fu Panda” for motivation.

Unfortunately, Saunders didn’t make the Olympic team, placing sixth. She attributes it to remembering her mistakes from 2016.

“I just had some technical issues, which I can’t take back now,” she said. “I believe the thought of how I didn’t make it in 2016 prohibited me from doing the things I was used to doing. All I could think about was 2016 and the mistake I made then. It was causing me to make adjustments off of what I did in 2016 rather than adjustments based on the athlete I am now.”

Saunders is still on the pro track circuit, having recently returned from a tour of Europe.

“I’m definitely going to try again,” she said. “I was advised to retire, but I don’t think it was good advice.”