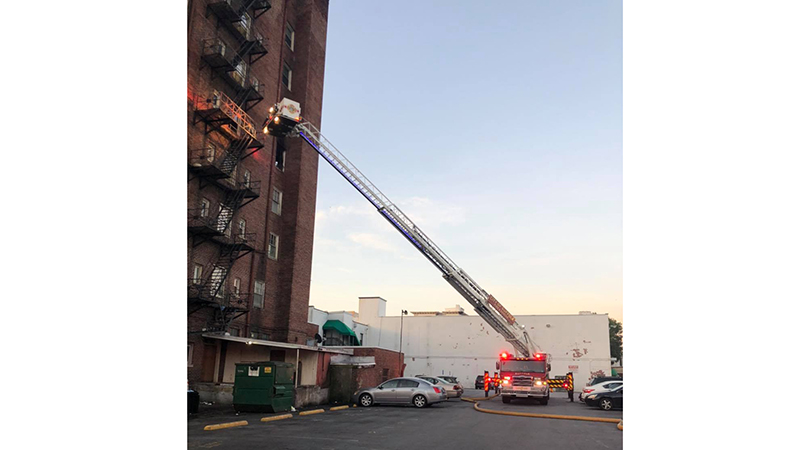 Since a fire damaged a significant portion of the Suffolk Tower building in the downtown area more than a week ago, its 118 residents have not been able to return to their apartments and are left in limbo while awaiting news about if and when they could return.

They have been staying in hotels in the city, with the property owner paying for vouchers.

And though those vouchers are set to end by noon Friday, the residents have been given a reprieve from the city and can continue to stay at their respective hotels for another four days, according to First Baptist Church Pastor David Edgell.

From there, the city will look at each situation on a case-by-case basis, Edgell said, and Cheryl Griffin, hotel shelter coordinator at The Planning Council, which works with partners throughout Western Tidewater to offer solutions for homelessness, will be the liaison between the two groups. Griffin said the city “is taking action” and asked for anyone who knows any landlords or apartments for rent to call 757-304-2882 and leave a message.

Residents, who have had to leave the building twice to stay at hotels in recent weeks due to the fire and a significant water leak inside the building about two weeks before that, are also expected to get a chance to return to their apartments beginning Friday to retrieve belongings, according to Scott Alperin, the attorney for building owner Suffolk Tower Holdings LLC, but will need to wear an N95 mask and assume responsibility for going in the building. Alperin said he planned to call the hotels to get that message to residents.

Edgell, along with city officials, the faith-based community and local non-profits, have been working to marshal resources for residents, and Alperin said he, too, has been engaged with many of those groups also in an effort to help residents. Edgell said the churches have started to mobilize to prepare hot meals to take to hotels.

In a Facebook post Thursday evening, Edgell said there are about 52 hotel rooms of people that are still in crisis. He said they would begin to take donations of Food Lion and Walmart cards at $25 per card, with Griffin giving those out on an as-needed basis, and they are working to get clothes to residents in need.

The city had money put in to help the homeless with COVID-19 through The Planning Council,, and this, Edgell said, would be a way for the city to step into that role again.

“That way it’s all the city working together,” Edgell said. “It’s not just the faith community. Because these are real people in our community that are in real crisis.”

City spokeswoman Diana Klink confirmed Thursday in an email to the Suffolk News-Herald that city inspectors, in attempting to check on outstanding life safety issues, had been denied entry Wednesday to the Suffolk Tower building, but said it has not been condemned.

“It was previously determined following the fire on July 13, 2021 that a total of 27 apartment units were deemed unsafe and couldn’t be reoccupied due to unit door replacements and locks, and no working smoke detectors,” Klink said.

She said city community development inspectors were at the building to check on outstanding safety issues previously noted and they “were denied entry by building management.”

“Since staff was denied entry, a placard was placed on the front and rear doors of the building noting affected units,” Klink said.

The placards, dated July 21, say “this structure is unsafe or unfit for habitation and its use or occupancy has been prohibited by the code official in accordance with Section 106 of the Virginia Uniform Statewide building code,” with Susan Dillard’s name as the code official on it along with the affected units.

However, Alperin said the city has been more focused on the doors and smoke detectors in trying to rush people back in to occupy their units before all safety issues are resolved.

“The city is not cooperative, and they, in fact, are doing the opposite of what we need to help these people,” Alperin said. “And it pains me that they’re painting us out to be the bad guys here when we’re trying to keep a roof over these peoples’ head and keep them safe, and they’re trying to force them back in the building.”

Alperin said city inspectors “have crawled in and outside every corner and nook of that building since the fire occurred” and added that the city sent him a 33-page notice of violation. The only reason they were not let in Wednesday, Alperin said, “is because they told us, ‘Hey, we want to get in here and see how close you are to getting the doors installed so that we can get these tenants back in there,’ and I told the building superintendent that we have information from our electrical engineers that indicates that it’s not safe, so we’re not letting them in there to inspect for reoccupancy.”

Alperin said the next step would be to have a complete building assessment done by a licensed contractor to determine the full extent of the fire, smoke and water damage to the electrical and mechanical systems.

Once that’s done, he said they would need to make the appropriate repairs before allowing residents to live there again. He said he doesn’t yet have a timeline for the assessment and repairs to take place, and added they do not yet know the cost to perform this work and whether there is insurance money to pay for it.

Alperin said residents who do not wish to live there anymore have rights under their lease in a casualty loss, such as what happened with the fire, to end it because they can’t gain occupancy.

Klink also confirmed that “it is our understanding that the owners of the building will no longer be paying for hotel rooms for those that have been displaced effective Friday, July 23, 2021.”

Alperin confirmed that, saying the owners could no longer afford to pay for hotels after having done so for more than two weeks over the course of two separate instances. He said the LLC has spent tens of thousands of dollars in hotel costs during that time, and added that there is no legal obligation of the landlord to pay for residents’ hotels while their apartment building is not able to be occupied.

“We’re doing it because we’re trying to do the right thing,” Alperin said. “But it is financially sinking this property. For us to even be able to make our mortgage payment now is going to be very difficult because we have no rent coming in. We put up all the tenants for a combined total of over 14 days in the last few weeks, and with over 100 tenants you can do the math at $150 a room, times all those tenants, it gets very expensive very quickly.”

The city is working with local non-profit organizations and the faith-based community to find short-term housing and assistance to the affected residents as they work to secure more permanent housing. The city has also been reaching out to local hotels to determine what availability they might have to help those needing a place to stay.

Edgell said two residents of the building attend First Baptist, and the church has been trying to help them along with the other Suffolk Tower residents. One has found a place to stay, but the other has not, and Edgell said the church had paid for that person to stay at the North Main Street Super 8 Motel, where she had been staying since the fire at the building just after 4 a.m. July 13, for an additional week.

Herbert Macarery Boothe, 69, who lived on the fifth floor of the building in apartment 518, according to a criminal complaint, has been charged with arson of an occupied dwelling in connection to the three-alarm fire.

According to the criminal complaint filed in Suffolk General District Court by Suffolk Fire and Rescue Investigator Pam King, the Suffolk 911 dispatch center received a call from Atlantic Protect, the fire alarm monitor company, advising that the fire alarm was going off at 181 N. Main St. on the fifth floor of the Suffolk Towers building. Other calls to 911 from residents followed, and other alarms were going off on different floors of the building.

One caller to 911, according to the criminal complaint, said he was on the “fifth floor and cannot breathe,” with someone from Battalion 1 saying that there was a “fire on the fifth floor. Pam, This is our worst nightmare for this building. I need you to respond.”

Edgell, who had planned to speak during Wednesday’s City Council meeting but was too late to sign up, said one of the two residents from First Baptist told him she had awakened and heard the alarm, grabbed her granddaughter and headed out of the building, finding black smoke by the time they got to the sixth floor, where they found other residents crawling on their hands and knees down the stairs.

Outside, according to the criminal complaint, King met another investigator about a patient who had “told the medic that he had started the fire.”

“The accused admitted to sitting (sic) the fire in his apartment by lighting a chair on fire with a lighter,” the complaint states.

Besides being charged with arson, Boothe has been charged, according to other criminal complaints, with assault and battery for allegedly spitting in the face of a Suffolk Police officer, and attempted sexual battery for allegedly scratching someone in the chest and arm. Both incidents are alleged to have happened at Sentara Obici Hospital, where Boothe was being treated after the fire. He had an arraignment hearing July 19 in Suffolk General District Court, but it was continued until Aug. 30.

Boothe was denied bond during a July 22 hearing in the same court. Judge Alfred W. Bates III agreed with Assistant Commonwealth’s Attorney Jeff James that Boothe, who appeared in court in a wheelchair, was a danger to the community.

Boothe’s attorney, Assistant Public Defender LeRon Gilchrist, told Bates, “Mr. Boothe will maintain that the fire was set accidentally and not maliciously.” Gilchrist told the court Boothe was not a risk to flee since he has family living in the area and has had a disability since 2005 and had limited means to post bond.

James said there may be an additional charge filed, telling Bates that there was a “probable assault” of a firefighter by Boothe. During the hearing, James described residents as leaning outside their windows and yelling to be rescued.

The fire came about two weeks after a major water leak on the building’s fifth floor, which affected the floors below that as well as the basement, with electrical hazards identified. The building had about 50 of its 59 units occupied.

Edgell said he has spoken to the two members of his church who had been living in Suffolk Tower, as well as other residents there, property manager Mike Queen and city officials about the situation, including City Manager Al Moor prior to the start of the council’s work session Wednesday.

“Residents have little to no options for housing,” Edgell said after the council meeting, reading from notes he had prepared to share with council. “The availability of housing is limited, and most of these residents are disabled, seniors, handicapped, single moms.”

Suffolk Tower Holdings LLC bought the building, which opened as a hotel in 1925, for $1,675,000 and its listed address is Alperin Law in Virginia Beach.

Edgell said in talking to residents of Suffolk Tower, they are upset and do not know what to do next.

“They’re unaware of what they’re going to do,” Edgell said.