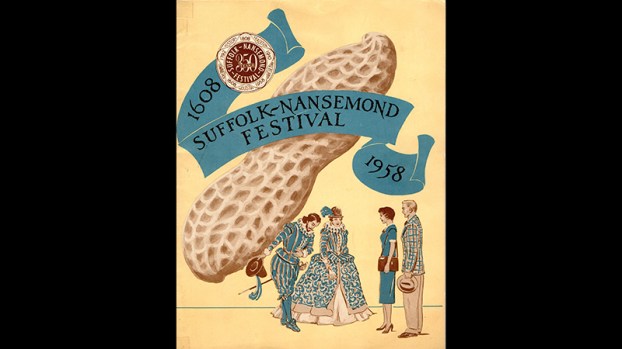 The cover to the Suffolk-Nansemond Festival booklet. 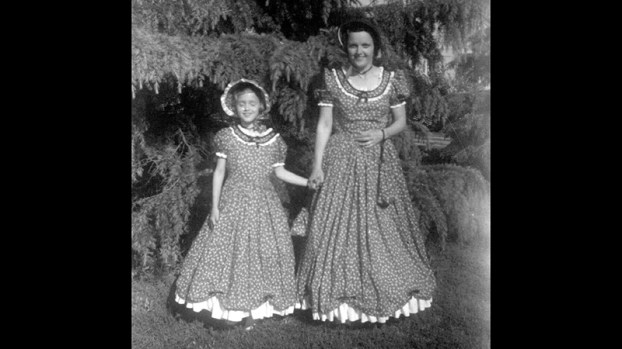 Jubilee Belles Frances Hobbs and daughter, Cindy, were among the features at the Suffolk-Nansemond Festival in May 1958. 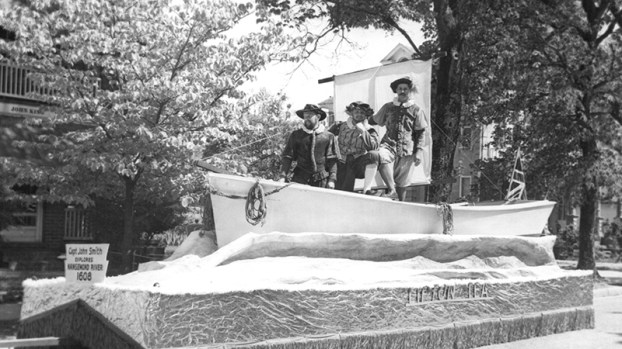 The John Smith Float was presented by Lipton Tea. 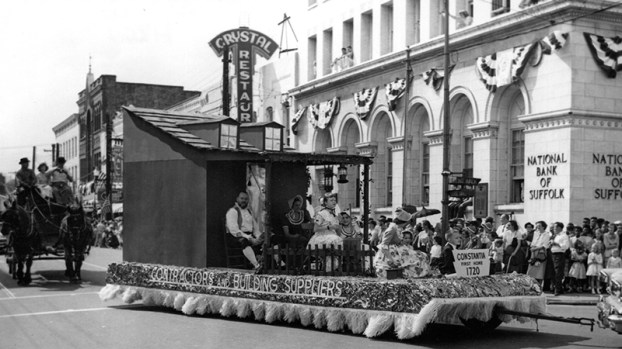 The Constantia Float was presented by Suffolk’s contractors and building suppliers. 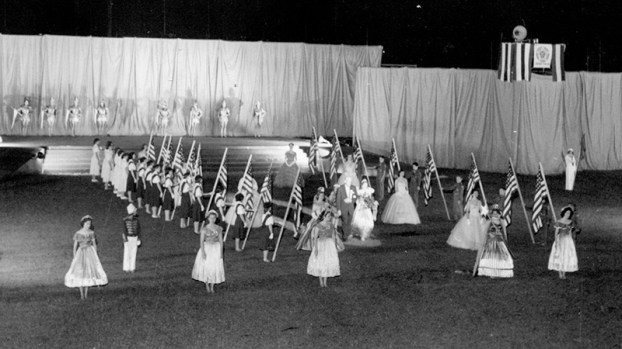 We all know that Suffolk’s recorded history dates back to 1608, when Captain John Smith sailed up the Nansemond River and “traded” with the Nansemond Indians. But 350 years later, in 1958, citizens of Suffolk and Nansemond County spent more than a week remembering and celebrating all that had happened in the intervening years.

The Suffolk-Nansemond Festival ran from May 9 through May 16, 1958, and was a result of many months of planning by hundreds of people. Former Mayor R.L. Woodward headed up a complex organization that managed every aspect of the celebration. Responsibilities were delegated through “divisions” for revenue, participation, tickets, publicity, hospitality and special events. Each division included committees, local civic organizations and even schools and churches. It was truly a community effort.

The festival opened with the Queen’s Coronation Ball on Saturday evening, May 9. This event was held at the Virginia Department of Highways’ garage, a venue deemed large enough for the number of people in attendance. Here, Miss Roslyn Aston was crowned Queen of the Festival. Along with her were eight other young ladies named as members of her court. Their selection was based on the number of votes received by each of them over the three previous weeks.

Each of the seven days of the festival featured a theme that was played out through daytime and evening events. The themes included Religious Heritage Day, Governor’s Day, Youth Education Day, Ruritan Agriculture Day, Brothers of the Brush and Jubilee Belles Day, Veterans Day and Homecoming Day.

A “mile-long” parade was presented on Monday, “Governor’s Day,” and featured 10 marching bands and 20 floats. The first float featured the Festival Queen and her court and was followed by others depicting events in Suffolk’s history. These included Capt. John Smith’s voyage up the Nansemond River; the charter of Suffolk in 1742; George Washington surveying the Dismal Swamp; the Siege of Suffolk; and other events. The King’s Fork Ruritan Club presented two connected floats, the first featuring young people dancing the Virginia Reel, representing 1608, and on the second, teenagers jitterbugging to the rock-and-roll music of 1958.

Each evening from Monday through Saturday, a pageant titled “The Constant Cavalcade” was presented at Peanut Park. The name “Constant” reflected the endurance shown by Suffolk and Nansemond citizens over the years, and it also recalled the name of John Constant, whose tobacco warehouse on the Nansemond River marked the site where the town of Suffolk originated. John Constant’s home, “Constantia,” was depicted on one of the floats in Monday’s parade.

Monday evening’s festivities opened to an audience of 1,000 spectators, with an address by Governor J. Lindsay Almond Jr. The governor spoke of “the wonderful progress made in the area and predicted that the apparent enthusiasm of the citizens would make for a bright future.”

Each evening’s performance opened with a program related to the day’s theme. This was followed by the grand entrance and introduction of Queen Roslyn and her royal court, and then by 18 more “episodes” depicting various events in the history of Suffolk. The Suffolk News-Herald reported, “There were a multitude colorful period costumes, horses, covered wagons, bathing beauties, can-can dancers, a Gay Nineties picnic frolic, and a reenactment of “The Great Fire,” which sent billows of smoke over the entire area.” The cast of The Constant Cavalcade totaled more than 400 people.

Men of Suffolk were called “Brothers of the Brush” and were encouraged to grow beards, wear top hats and derbies, and carry canes. Suffolk clothing stores sold the hats and special bow ties for the “Brothers.” Likewise, Suffolk ladies became “Jubilee Belles,” and many wore old-time bonnets. Wooden “nickels” with the Suffolk-Nansemond Festival logo were sold as souvenirs. On Thursday, men’s beards and Belles’ bonnets were judged by the Kangaroo Court on Main Street. Suffolk shop owners decorated their windows, and prizes were awarded to those judged to be best. Keystone Kops “patrolled” downtown Suffolk during the festivities.

A souvenir Suffolk-Nansemond Festival booklet was published, containing 112 pages of ads, historical articles and photographs, and information about the festival. These booklets were sold by Suffolk and Nansemond County school children.

The 1958 Suffolk-Nansemond Festival not only celebrated Suffolk’s rich history, but also it was a significant historic event in itself, worthy of recollection and celebration even today.

Special thanks go to Ms. LaSandra Adams, who researched Suffolk News-Herald microfilms at Morgan Memorial Library for information in this article.