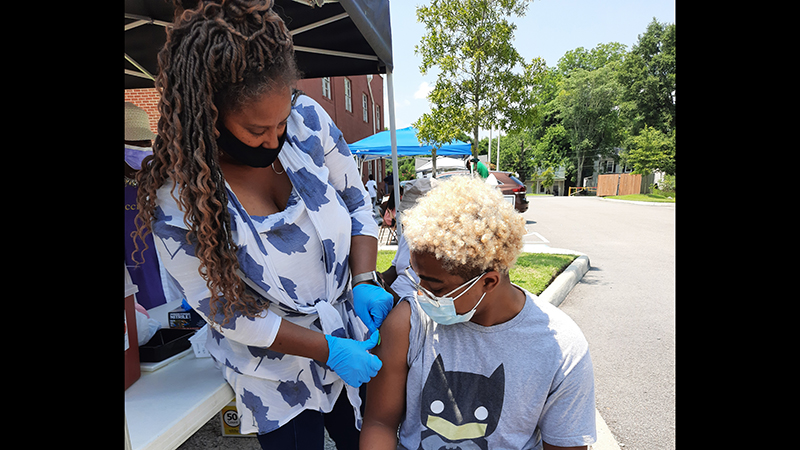 Dr. Aviance Lewis of Hampton University puts a bandage on 17-year-old Isaiah Scott’s arm after giving him his first dose of the COVID-19 vaccine at First Baptist Church Mahan Street on Wednesday.

A vaccination clinic at First Baptist Church Mahan Street gave dozens of first and second doses to people in the Suffolk community on Wednesday, and people were grateful for the opportunity.

“The first one made me feel good, but the second one made me feel even greater, because I know I’m fully protected,” said Erica White, who got her second dose this week. “I feel like a brand new person. It is very important I get vaccinated. I have my kid’s life and my life to think about. This virus is very dangerous and here we go with another variant, so it’s definitely mandatory for all of us to get.”

Al Ward, a Southampton County resident, said he has questions about the vaccine because of his health conditions, but ultimately chose to get it because he noticed all of his friends who were coming down with COVID-19 were unvaccinated.

Isaiah Scott, 17, was also there getting his first dose with his grandmother, Juanita Eley.

“I feel pretty OK,” he said a few minutes after getting the shot. “I just thought it might be time to get it.”

This is the fourth vaccination clinic the church has held, and the second one in which it partnered with Hampton University’s mobile vaccination bus. The first one with Hampton was July 7, and the bus was back on July 28 to give the second doses of Pfizer vaccines. Folks who got their first dose this week were directed to an upcoming clinic at Metropolitan Baptist Church to receive their second doses.

“We’re just very intentional about how we advocate the Lord’s witness in the community, especially in a season of pandemic,” he said. “This becomes another opportunity to build upon that community effort.”

Blunt said the church and its leaders and volunteers see the opportunity to serve the community, and the Lord’s kingdom.

“It’s not only a public health crisis, it’s not only a social justice crisis, but it’s also a spiritual crisis, because if people are not well, how can we serve the kingdom?”

Patricia Lynn Richards-Spruill, a member of First Baptist, has been one of the driving forces behind the church’s efforts, along with a group of ladies from the church that have come to call themselves the “COVID angels.”

“I feel that there’s several reasons that we had the success today — publicity and partnerships,” she said, noting several organizations that had helped spread the word. In addition to Hampton University, partnerships have included the Virginia Department of Health, which sponsored lunches and Walmart gift cards for attendees; Holland’s and Chick-fil-A, which provided lunches at discounted rates; the Suffolk Redevelopment and Housing Authority; the Alzheimer’s Association, which came to the event to provide resources; and more.

Spruill said she has been using a saying she calls “The Four Vs” when trying to convince people to get the vaccine.

“You either get the vaccine, or you get the virus, a ventilator or a variant,” she said.

Vice Mayor Leroy Bennett was on hand Wednesday and said he hopes to be able to get the Hampton University bus into other neighborhoods in Suffolk.

“It really concerns me that people are not taking advantage of the opportunity,” he said, noting fairly low vaccination uptake in the local area.

Dr. Aviance Lewis, the community engagement coordinator for Hampton University’s mobile unit, said she was pleased with Wednesday’s turnout and that they had given a good mix of first and second doses.

“We’re making sure we’re getting all those that we vaccinated on the 7th of July completely vaccinated today, and then starting the series for those who couldn’t make it on the 7th but heard about it or finally decided to get vaccinated,” she said.

She urged everyone to get vaccinated, especially with the rise of the delta variant — even if they already had a COVID-19 infection. She likened the difference between relying on natural immunity and getting the shot to the difference between trusting that pictures taken with an analog camera will come out well, versus being able to see the results immediately and make adjustments on a digital camera.

“Viruses want to live,” she said. “That’s why we have all the variants that we do. This delta variant is taking us by storm, just like COVID did initially.”

She noted that no vaccine is 100% foolproof, but that people who do get infected post-vaccination are having a much easier time with it.

“Yes, you can still get COVID,” she said. “No vaccines are 100%. But I’ve known people who have tested positive after being fully vaccinated and they may feel cold- or flu-like symptoms for a day or two, and then they’re fine.”