Smithfield thanks Suffolk for assistance in 1921 fire 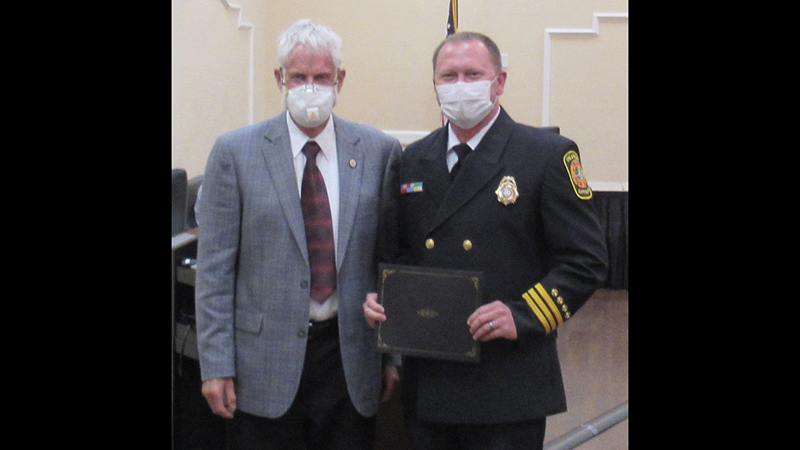 One hundred years later, the Town of Smithfield has officially thanked the fire department of the City of Suffolk for its assistance in extinguishing “The Great Fire of Smithfield” that devastated the town’s peanut processing and export industry on Aug. 17, 1921.

Then, Smithfield had no organized fire department. When flames broke out in the wharf area early on a Wednesday morning, town residents’ makeshift firefighting capabilities were quickly overwhelmed. A telegraph message to neighboring Suffolk brought its new gasoline-powered pumper engine racing along dirt roads, arriving in under one hour. Almost collapsing the wooden bridge over Cypress Creek as it arrived, this “modern” apparatus from Suffolk helped keep the fire from spreading up Wharf Hill and into town to save the day.

Within hours, the town ceased to be “The Peanut Capital of the World,” but the assistance from the Suffolk fire department prevented greater loss.

During the Aug. 3 regular Town Council meeting, an official, somewhat belated, hearty “thank you” to the current Suffolk Department of Fire & Rescue was rendered. Nick Savage accepted the commendation for Suffolk. Notably, Savage is also a volunteer firefighter in the current Smithfield Fire Department, which was established 18 years later in 1939.

More events are planned this month in Smithfield — mostly on Saturday, Aug. 21, four days after the anniversary — to recognize the 100th anniversary of the Great Fire.

The old bell in the tower of Christ Episcopal Church will toll the morning of Aug. 21, just as it did 100 years ago to sound the alarm during the Great Fire of Smithfield.

Newspapers of the day preserved in the Library of Virginia’s online archives report the fire started sometime after a night watchman at the Gwaltney-Bunkley peanut factory reported at 3:30 a.m. that all was well, but before 6:15 a.m. when day workers found flames near the factory’s engine room.

By 6:30, residents of the town had formed a bucket brigade. Around 7 a.m., Smithfield had summoned Suffolk for help, as Smithfield’s Volunteer Fire Department would not exist for another 18 years.

The now-defunct Norfolk Post reports the blaze had been confined to a two-block area along the town’s waterfront by around 8:30 a.m. This was largely thanks to the Suffolk Fire Department, who “stopped for nothing,” according to the Richmond Times-Dispatch, “making the run from Suffolk to Smithfield in less than an hour.”

The Suffolk unit had left at 7:20 and arrived in Smithfield by 8:15. It was record speed for the day, the firefighters having achieved it by sending word ahead to have bridges reenforced with heavy timber to bear the weight of a “big motored pumper, with a full crew of men,” the Times-Dispatch reports. Half an hour later, a fire tugboat from Newport News had arrived and the two units, in less than two hours, had the blaze under control.

The church has scheduled events to coincide with each ringing of the bell. At 10 a.m., the church will open its doors for an art exhibit and sale inside its parish hall and tours of its sanctuary. At 11 a.m., a special tour led by Bill Egan, a structural engineer, will focus on the circa-1830s church’s history and recent efforts to preserve its historic stained glass windows.

Fire trucks are planned to be on hand for the occasion.

At 1 p.m., Albert Burckard of the Isle of Wight County Historical Society and Michael Brinkley, a Suffolk historian, will give a presentation at the church of the fire’s sequence of events and its aftermath. At 3 p.m., the bluegrass gospel group Solid Rock will perform period music on the church lawn.

There will also be period-dressed interpreters at the 1750 Isle of Wight Courthouse on Main Street throughout the day, and a 1921 automobile on display. At the Isle of Wight County Museum, also on Main Street, residents and visitors are invited to see the “world’s oldest peanut,” a circa-1890 legume that is all that remains of the town’s once-booming peanut industry founded by P.D. Gwaltney Sr. and Jr. The museum will also host a “lunch and learn” session on the fire at 12:30 p.m. Aug. 17.