National Night Out reigns, and rains 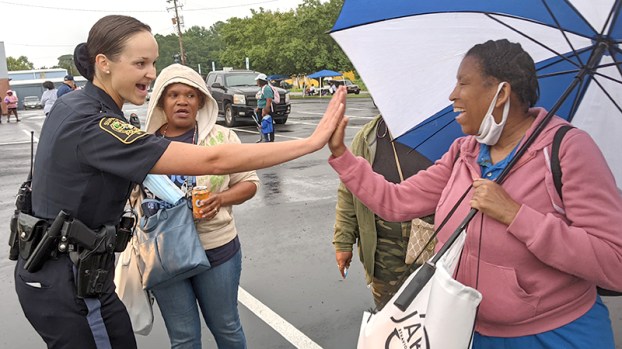 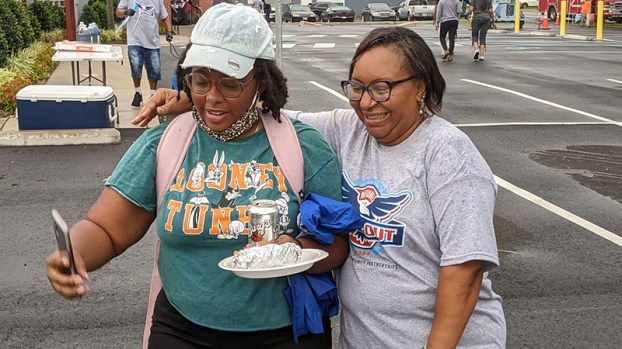 Shawntel Layne, left, smiles as she looks at a selfie she took on her smartphone with Suffolk Redevelopment and Housing Authority Executive Director Tracey Snipes during the city’s National Night Out event Aug. 3. 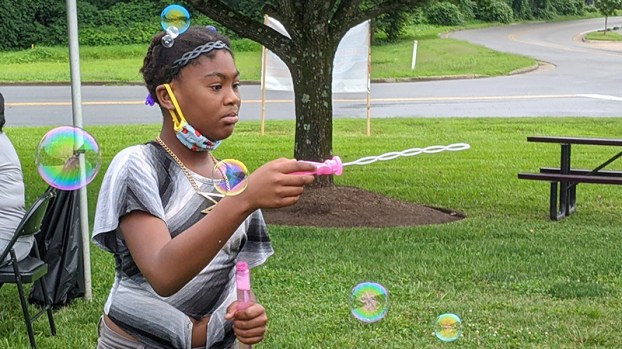 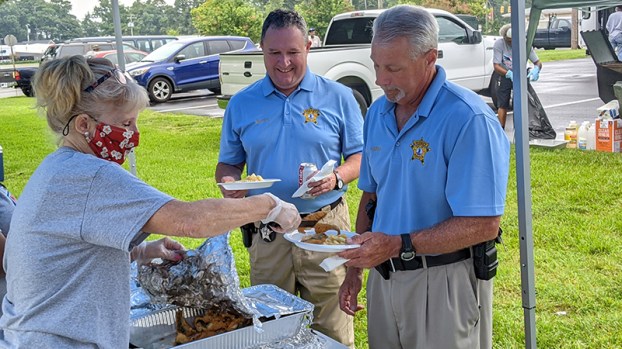 Members of the Suffolk Sheriff’s Office get food during the Suffolk Redevelopment and Housing Authority’s National Night Out event Aug. 3. 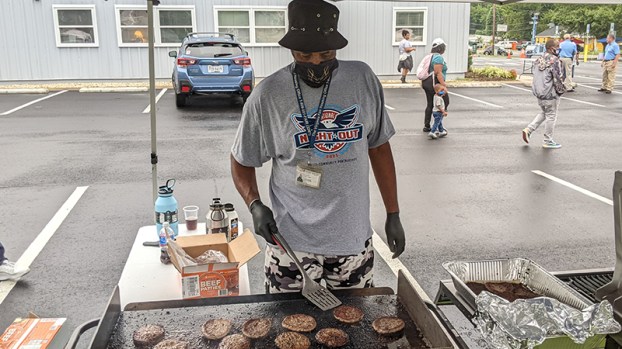 Tony Young, an employee with the Suffolk Redevelopment and Housing Authority, flips hamburgers during its National Night Out event Aug. 3. 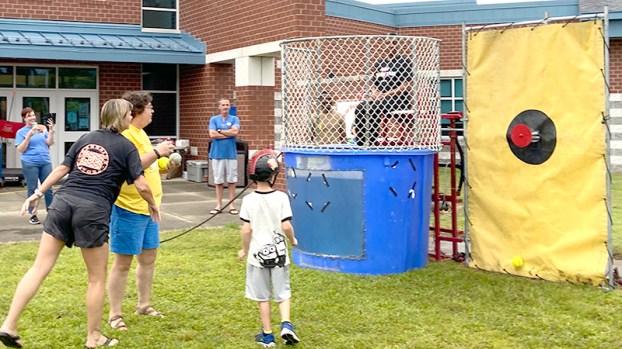 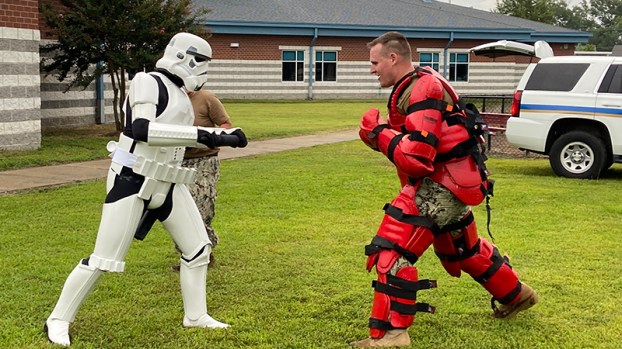 The Creekside Elementary School National Night Out was home to a showdown between a Stormtrooper and the U.S. Navy Police. 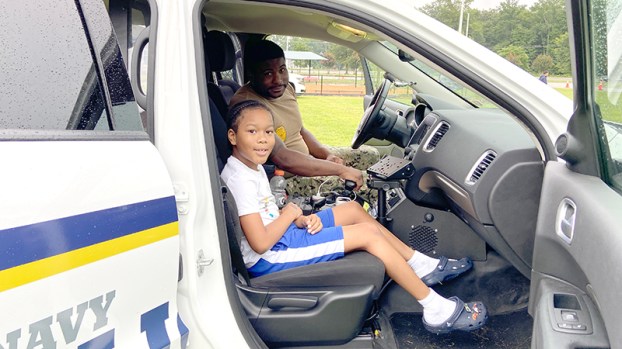 Kids could check out the inside of the U.S. Navy Police car and could speak through the walkie-talkie intercom. 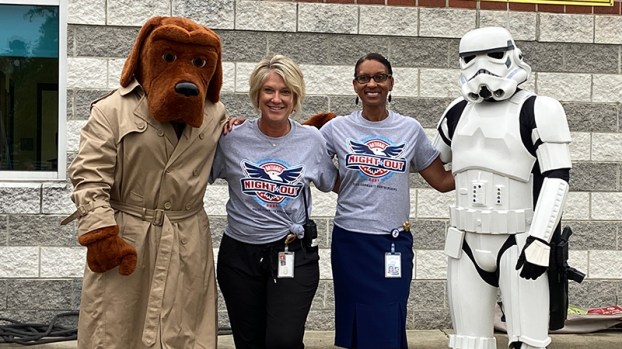 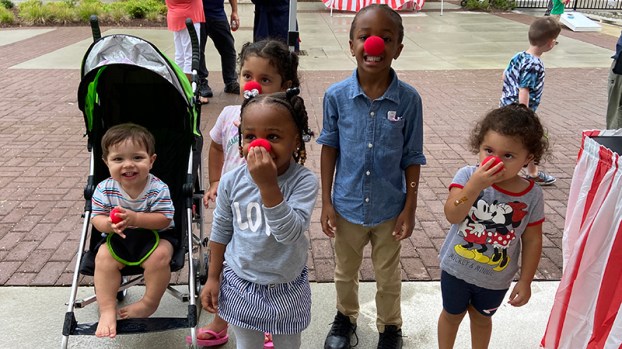 Kids at the carnival took the opportunity to clown around with their own bright red noses. 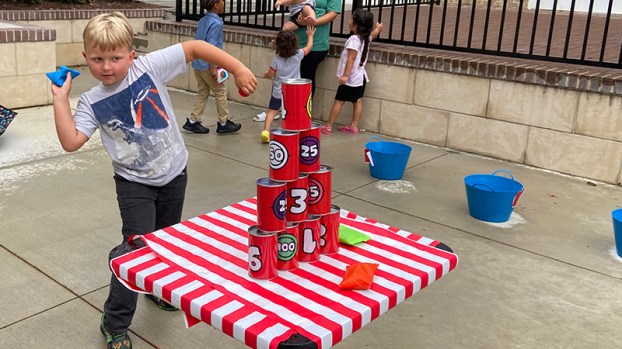 The Bridgeport Suffolk and 3800 Acqua Apartments hosted an old fashioned carnival with classic games, fun tattoos and a bubble station.

By Jimmy LaRoue and Rachel Austin

National Night Out reigned on in Suffolk, even as it, well, rained on.

After a year’s absence due to the coronavirus pandemic, the city held events at multiple sites on a rainy Aug. 3 evening that highlighted what officials say is their commitment to take back the streets from crime.

And though it rained for much of the evening, crowds flocked to National Night Out sites across the city, though a few sites canceled events, a couple more moved indoors and others wrapped up early.

Still, at sites across the city, public safety staff and residents shared food, fun and a festive atmosphere while promoting efforts to keep communities safe and say no to crime.

Outside the Suffolk Redevelopment and Housing Authority’s office on East Pinner Street, a DJ played music, children blew bubbles and played cornhole, and more than 100 people ate under tents as people were soaked in fellowship, but had tents to keep dry during the rain.

“This has been an amazing experience, and I’m really happy today because no one had to come out because of the weather, and yet they still wanted to come together, unify for a night out from crime,” said Tracey Snipes, the housing authority’s executive director.

“Working together with them will help strengthen our partnerships with the community, with our law enforcement representatives and staff, and also bring awareness to the prevention of violence and crime, which we need to do in our community and across the 757,” said City Manager Al Moor, one of several city officials who helped kick off the evening at City Hall.

Mayor Mike Duman said the city’s events are second-to-none in the region and across the country, as its event has been named top five in the country for 14 years, and has earned five first-place awards for its population category, most recently in 2018 by the National Association of Town Watch.

“There’s no doubt about it,” Duman said, “No one in Hampton Roads, Virginia or the nation throws a party for National Night Out like we do right here in Suffolk.”

Sheriff E.C. Harris, along with Duman, noted the gap in the event with the ongoing pandemic, and Duman said rain might dampen the ground, but it would not dampen “our resolve, our spirit or our quest for a safer, more harmonious community.”

“A lot has transpired since our last National Night Out celebration in 2019,” Duman said. “This year’s event is perhaps more important than any other in recent history. We know that there is immeasurable power when a group of people with similar interests get together to work toward the same goals. In this case, it’s the safety, well-being and spirit of our community.”

Interim Police Chief Al Chandler said National Night Out is a declaration to stand together and say the city’s streets will not be overrun by crime.

“We will continue to band together, creating community connections, fighting crime together,  making our streets safer, together, building stronger relationships together,” Chandler said.

“See, when we come together as a community, as a collective, all of us together — police, and the citizens and the elected officials and the businesses — when we all come together, we can keep our neighborhoods safe. When we’re together, we can take care of each other. Together we can do almost anything as long as we’re doing it together.”

Outgoing Commonwealth’s Attorney Phil Ferguson, who is retiring at the end of the year, said the city is committed to its law enforcement and public safety.

“We have had the support of City Council, who has made public safety a top priority, unlike a lot of other jurisdictions that are trying to defund police and defund their localities and finding out how crime is going through the roof,” Ferguson said. “We are not going to allow that to occur in Suffolk, and it’s because we’re all working together and reaching out to our citizens and our community, along with law enforcement and the entire public safety community, that we’re all going to be successful.”

Following the ceremony at City Hall, seven motorcades made their way to different National Night Out events, and even in the rain, police and other officials broke bread, played games and chatted with residents.

And after a year’s gap between events, for some it was a way to reconnect, even as the specter of the pandemic looms with rising COVID-19 positivity rates with the advancing of the delta variant, with Western Tidewater at 10.9%.

In North Suffolk, the party continued just as hard as first-time participants got their feet wet in Suffolk’s biggest party of the year.

Bridgeport Suffolk and 3800 Acqua Apartments hosted an old-fashioned carnival for their National Night Out debut. Natalia Mount of Virginia Beach performed covers to popular songs on her acoustic guitar as families enjoyed carnival games and other surprises.

“This is Bridgeport’s first year,” said Casey Mazzola, the event coordinator. “We were open last year but couldn’t participate since it was canceled. We’re excited we can be a part this time.”

Families could play old fashioned games, including a ring toss, giant kerplunk, ball toss, corn hole and can-knockdown. In addition, fun carnival tattoos and clown noses were available for those who wanted to get into the whole spirit of the carnival. As kids played the games, they could earn tickets to redeem prizes at the concession stand.

A notable addition to the carnival atmosphere was a mobile axe-throwing attraction from Killin’ Pine and complimentary caricatures by Bob Langston. Sno Kingz Snoballz was also present to serve up tasty snow cones.

“I know Suffolk is huge with their National Night Out, so it’s great to be a part of it,” said Mazzola.

Another first-year participant was Creekside Elementary School. The school hoped that this event would create an opportunity to reconnect with students and families since the pandemic.

“This is our first year, and we plan on doing it again next year,” said Megan Downes, an organizer for the event from Creekside Elementary PTA. “Hopefully, next year we’ll have sun.”

A special guest for the event was the U.S. Navy Military Police. They presented a K9 demonstration and taught how to properly fight with a baton as they let the kids try it out on one of their experts in the proper padding. A visiting Stormtrooper even gave it a go, trading in his blaster for a foam baton.

Due to the rain, not many kids participated, but the Military Police helped out with the bike rodeo. They made sure the student’s equipment was correct, and the Virginia Department of Transportation provided signs to help students practice the rules of the road.

“Safety gear is very important,” said MA1 Belhady Ratuita. “There are two types of riders, the riders that go down and the ones that will go down.”

Their table included glow sticks and other items for the students to decorate their bikes after making sure their safety equipment was good.

“We decorate the bikes, check their gear and make sure their tires are good,” said Genesis Duarte. “We want them amped up about safety and teach them about yield and stop signs. It’s all about fun too.”

The event also included a dunk tank where students could take their turn dunking their principal and vice principal without any threat of detention, which was one of the biggest hits of the night.

After missing a year due to a pandemic and rainy weather, Suffolk proved that it takes much more to stop a night of coming together to make its community better.