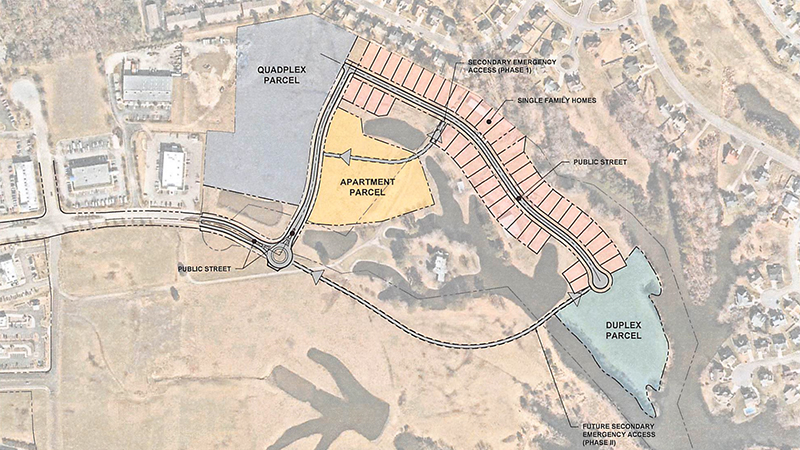 The developer of the Godwin Park project received unanimous City Council approval for relief from city street improvement standards that will allow it to fully develop its first phase.

The property is located off of Godwin Boulevard and borders Sentara Obici Hospital and Hillpoint Farms, and has already been rezoned from general commercial, office-institutional, light industrial and rural residential to a mixed-use development overlay district and is expected to take more than a decade to complete.

In Phase 1 of the property’s development, The Terry Peterson Companies, which has developed multiple communities in Suffolk, plans to build 60 homes and 120 townhomes, along with 260 apartments or condominiums, to be divided into 49 lots. It also plans to develop a minimum of 85,000 square feet of commercial space and a minimum of 24,000 square feet of medical/office space. The developer for the project hopes for this to be a catalyst for further development of the property.

Under normal circumstances, a developer building on more than 25 lots normally has to provide for a second access to a public street to support an interconnected system to provide adequate access for public safety vehicles and aid pedestrians and cyclists in accessing the area.

Because the northern part of the property for Phase 1 will be on a narrow peninsula between 300 to 400 feet wide, it makes a looped road impractical, according to a city staff report on the variance request.

“Based on the shape of the land and water bodies that surround the developed area, a single street is the only feasible option for site access,” a Kimley-Horn letter on behalf of the property owner and developer states.

The developer has proposed one public street of about 2,700 feet, connecting at the east end of Corporate Lane and ending at a proposed cul-de-sac near the point of the northern peninsula at the property’s eastern boundary.
Phase 1 of the project also proposes one emergency secondary access and an additional future secondary emergency access in Phase 2. According to Suffolk Fire and Rescue, that would meet city fire code, which requires two fire apparatus access roads for single-family developments which have more than 30 units and/or two fire apparatus access roads for multi-family developments with more than 100 units.

“We were aware at the time because of the physical constraint and topographic features of this property that we were probably going to need to request these variances,” said Tuck Bowie, president and CEO of operations for The Terry Peterson Companies. “We didn’t at that time because we wanted to get through the rezoning, get that approved. And then we wanted to work with staff and make sure we knew what the parameters were.”

The Planning Commission, by a 7-0 vote, had recommended granting the variance.

“It makes sense what you’re trying to do here,” said Councilman Roger Fawcett at council’s July 21 hearing. “This is a big undertaking by the Peterson group. I fully support their initiative to get to this point.”

Councilman Donald Goldberg said he appreciates the work put into the project by the developer and city.

“I think it’s a great project and it’s got my full support,” Goldberg said.